Spring provides more variables than any other time of year, and this was one of those days. We left home in drizzly rain but the view out towards the Kawekas was actually pretty good. Arriving at the Lakes car park, we saw a couple of young hunters and a group from Auckland Tramping Club, the latter on their way to overnight at Kiwi Mouth Hut and tube their way down the Ngaruroro. They were carrying their rubber tyres, wetsuits, helmets and their packs looked huge and heavy. The river would be cold, so not everyone’s cup of tea. We wished them all well!

Colleen and Ray opted for a trip into Mackintosh Hut, and the rest of us started up the track to Kuripapango. 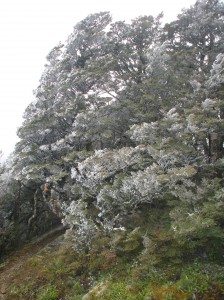 It was pretty cold to begin; the climb up towards Kuripapango generated some heat, so off with a layer or two. Everyone walked at their own pace and we soon split up, walking in and out of cold breezes as we made our way to Kiwi Saddle Hut. At times, the tops of the other ridges were visible in between the cloud. A small dusting of snow on the pines on the ridge tops made it look like Christmas had come early. We regrouped at the hut, and had a break for morning tea. Some decided that the next knob up the track was their goal today, before they returned to the hut and back to Kuripapango.

Five of us (Colin, Julia, Paul H, Ali and myself) continued on the loop walk. Lunch was to be at Castle Camp, and we reached it at noon. The views of Back Ridge and the tops where we were heading were in and out of view, due to rain cloud. We seemed to miss it and the wind had dropped, making it a little warmer. Some interesting rock formations took Paul’s photographic fancy. At Castle Camp, we had a good 35-minute break and watched Paul boil some eggs in his tiny old aluminium camp stove. There is a story behind it, but that would take a book…

The climb up Kaiarahi was achieved in good time, and the warmer clothing and rain jackets were required while a squall passed over. The loop swings around to head south-west and we had been expecting high winds, but not a grass or pinus contorta moved. We reached the Rogue Ridge junction at 2pm. The track descends steadily to the Tutaekuri and on the way we passed the two hunters who had set up camp near the track for a later hunt. After a quick chat, on we went. After having dry feet all day, it was a bit of a pain to get wet crossing the Tutaekuri but it was running average and clear. Crossing the Tutaekuri at the end of the day is one good reason to walk this loop in the clockwise direction. Otherwise, going anticlockwise as some of us did a fortnight ago, just makes a change. 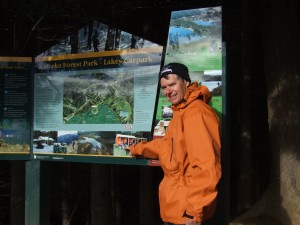 We reached the van a little before 3.30pm, so a good time of 7.25 hrs all up. The other trampers had all returned and had picked up Ray and Colleen only 15 minutes previously. Our timing was impeccable and it had been a good fast trip. We all viewed the photo on the DoC information board at the Lakes carpark, taken by Murray Goss of Macintosh Hut, with many members of the club sitting on the new extended verandah.

Sparrowhawk bivvy, Ruahine Forest Park, Saturday 6 August 2022 Banner Photo: The view east, towards the Wakararas and beyond On a beautiful … END_OF_DOCUMENT_TOKEN_TO_BE_REPLACED

Prologue: The author was on the Whirinaki tramp, reported on this website under the headline 'We observe a mock turtle and the rodent of Upper Te … END_OF_DOCUMENT_TOKEN_TO_BE_REPLACED

Ruahine User Group A meeting was held on Monday 25 July, in the NZDA rooms in Dannevirke.  Julia … END_OF_DOCUMENT_TOKEN_TO_BE_REPLACED

Ruahine User Group A meeting was held on Monday 25 July, in the NZDA rooms in Dannevirke.  Julia … END_OF_DOCUMENT_TOKEN_TO_BE_REPLACED

Ruahine User Group A meeting was held on Monday 25 July, in the NZDA rooms in Dannevirke.  Julia … END_OF_DOCUMENT_TOKEN_TO_BE_REPLACED

Ruahine User Group A meeting was held on Monday 25 July, in the NZDA rooms in Dannevirke.  Julia … END_OF_DOCUMENT_TOKEN_TO_BE_REPLACED