We set off from Church Road Winery at the earlier start time of 7.00 am to complete the tramp from Plateau Road to Minginui through the fabulous Whirinaki Forest.The forecast was for showers, occasionally heavy. We did better than that, but it was a coats on, coats off kind of day and not too cold. 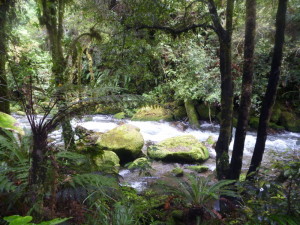 There were 19 hardy souls in two rental vans (two passengers picked up along the way in Bay View) and the expectation was for a long day. The journey entailed about one and a quarter hours on the Taupo Road before turning off just past the waterfall lookout. From there it was the same time along some deeply scoured logging roads to Plateau Road car park. The latter section did improve, due to grading recently.

We set off tramping at 9.30. Sixteen would walk through to Minginui, while three volunteers took the vans to the other end to await our arrival.

The track basically follows the Whirinaki River for the full distance, so it is trending downhill. There were the usual undulations of a riverside track especially when the banks were steep and the track went high up to get around. Total distance is generally considered to be 26 km. The direction is virtually due north for the full length.

Throughout the day we had the sounds of the river, which was never far away, the sounds of bird life and in particular the noisy kaka, and the sights of magnificent forest in all directions. We have to thank Dr David Bellamy for saving the forest giants from selective logging, due to the publicity that he created some years ago in protest. Well done, David. 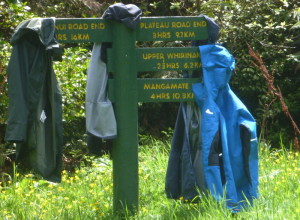 There was a stop-off at the limestone caves adjacent to where the track from Upper Whirinaki joined our track. It was a short “smoko” at the wire bridge. We arrived at Central Whirinaki Hut at about 11.45 for lunch and the sun came out just at the right time. Wet coats were soon drying. 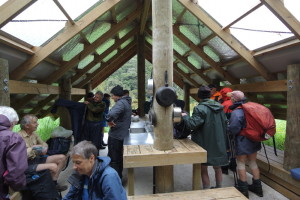 Verns Shelter for all of the trampers

With about four hours still to go, the next planned stop was at Vern’s Shelter about two hours away. Dave Hills (one of the drivers) met up with us well before the shelter, having walked south from the Minginui end. Whilst at the shelter, a discussion took place on the best way to get home. Estimates of two hours-plus, going back on logging roads, did not excite the crowd. The consensus was to return via Murupara and Reporoa. Opinion was that it would be longer in distance, but no longer in time. A sealed road was the deciding factor.

There was a five-minute detour at the end of the track when we went off to see the waterfall where the river cascades through a narrow gorge. Ken and John had completed the waterfall loop track during the day, about a four-hour tramp for them.

We arrived at the car park at 4.15, a little damp and very tired after nearly seven hours of tramping. Just as we set off, the heavens opened and we had heavy rain for most of the journey home. That was further confirmation that the sealed roads were the best option.

The actual time to the turn-off on the Taupo Road was 2h 20m, which was longer than the estimate for the Logging Road route.

Many thanks to the drivers who took the vans around; without that, we could not have done this excellent trip.