The turnout was good, with 24 members in a Eurocar van and three private vehicles. We set out with low expectations of climbing Kaweka J, based on past experiences of high winds, which were once again the order of the day. However, an old hand suggested delaying predictions until we were actually there. (There are still those who choose to see the glass as half-full…)

The convoy made its way to the turn-off to Whittle’s Farm, passing the vehicle graveyard opposite the Puketitiri museum, and went up the dusty road towards the Makahu Saddle car park. The road was in good order and we passed the quarry and the Loktow Road turn-off before beginning the descent towards the park, noticing the mountain cabbage trees that give an almost sub-tropical look to the forest. As we passed through open areas of scrub, the wind seemed to have died down. As we sighted the main range, it was evident that all the high points were smothered in white, rolled cloud that was initially completely stationary. 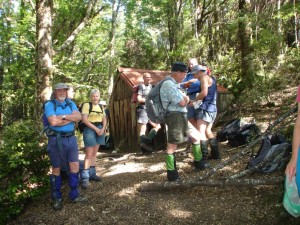 At the car park, as we put on boots and organised our gear, it became clear that the lull had been a fluke; it turned very gusty. The Brains Trust decided that an attempt to scale Kaweka J was once again not on, and alternative trips were discussed. That meant getting back into the vehicles and returning to a drop-off point where there was a fire-fighting pool set out alongside a cleared area, presumably for vehicles and/or a helicopter. This area is known as “The Quarry”, but was not connected to the one we had passed on the way in. Four decided to return to the Makahu car park and do some less strenuous trips around that area. They also ferried vehicles around, so that the others could do a round trip.

Club Captain’s briefing revealed that we would go down to the Makahu River via a little-used track, which began in scrub and grasses, down the clay-pans and into the kanuka stands. “Stands” is a misnomer, because much of the kanuka had been blown over by the high winds common to this area. The terrain was farmed many years ago, so we were walking through re-growth that had struggled to get above fairly stunted trees at the top end of the track. The route was not clearly marked and progress was impeded by criss-crossed spears of wind-blown kanuka, so it was left mainly to three old tuskers to bludgeon and bulldoze their way through, diverging at times when each believed they had “The One True Way”! From time to time, those following gave them a reality check when they strayed too far off course.

As we approached the bottom, care had to be taken not to veer too far to the left, for fear of a bluff that dropped down to the river below. By sidling to the right, an easier way down was found. The old tuskers, minus some skin, had got us there!

After crossing the river, the advanced guard waited for the rest, and took time out for snacks and a drink. It was pointed out by those who joined us that there had been an easier way down to the river, via a clay pan that was clearly visible on the spur we had come down on. To our left, some were studying a fern and moss-covered cliff from which water was dripping down. Attached to its face were tiny whisker orchids. It would have taken out the supreme landscaping prize at any international flower and garden show.

With all 20 back in the party, we climbed up the other side of the river, through open beech forest (where it was a matter of common sense as to where we went, rather than following a well-defined track). After several drink stops, we carried on until the goal was in sight: the elusive and historic “Iron Whare”, a ramshackle musterers’ hut that the Department of Conservation has worked to preserve. Some poked their heads inside to see what the interior was like. “Crude” probably covers it, when compared to the standard of today’s huts. Another photo opportunity arose when one of the party sprouted a set of deer antlers. We almost expected to smell the brimstone as well!

It became apparent why we had struggled to find the Iron Whare when approaching from the track leading to Middle Hill via the Makahu Bivvy, as the forest has a very open aspect and there is a regularity to the contours near the top of the ridge which would have made navigation difficult. From there it was only 20 minutes to Kaweka Bivvy, where we met Vic Bullock, Peter Heaney and Club President John Gray, who had travelled there via the Makahu car park. It was midday, and time for lunch in the shade. The sky had cleared, revealing a great view of Kaweka J and the ridges and high points to its North and South. Those with good eyesight could see Dominie Bivvy and everyone could clearly see how eroded the eastern side of the range is at that point. One member stood transfixed, apparently gazing into space. He was listening to the croak of frogs in a patch of algae-covered water that had pooled just below the bivvy. Those sounds were very familiar to many of us in bygone years; it is a pity that frogs are now also endangered.

After a brief lunch, we started back, again intersecting with the upper reaches of the Makahu River, which we followed for some distance upstream. When the rest of the party arrived, we took a steady but easy climb out from the river, through some outstanding beech forest and back to the vehicles. We were joined by John Marshall, who had chosen to investigate the area closer to the car park. After some time enjoying each other’s company and the sun – and changing into clean gear – we climbed into the vehicles and made an uneventful trip home at a civilised hour. While we hadn’t managed to climb Kaweka J, it was an enjoyable substitute.

Sparrowhawk bivvy, Ruahine Forest Park, Saturday 6 August 2022 Banner Photo: The view east, towards the Wakararas and beyond On a beautiful … END_OF_DOCUMENT_TOKEN_TO_BE_REPLACED

Prologue: The author was on the Whirinaki tramp, reported on this website under the headline 'We observe a mock turtle and the rodent of Upper Te … END_OF_DOCUMENT_TOKEN_TO_BE_REPLACED

Ruahine User Group A meeting was held on Monday 25 July, in the NZDA rooms in Dannevirke.  Julia … END_OF_DOCUMENT_TOKEN_TO_BE_REPLACED

Ruahine User Group A meeting was held on Monday 25 July, in the NZDA rooms in Dannevirke.  Julia … END_OF_DOCUMENT_TOKEN_TO_BE_REPLACED

Ruahine User Group A meeting was held on Monday 25 July, in the NZDA rooms in Dannevirke.  Julia … END_OF_DOCUMENT_TOKEN_TO_BE_REPLACED

Ruahine User Group A meeting was held on Monday 25 July, in the NZDA rooms in Dannevirke.  Julia … END_OF_DOCUMENT_TOKEN_TO_BE_REPLACED