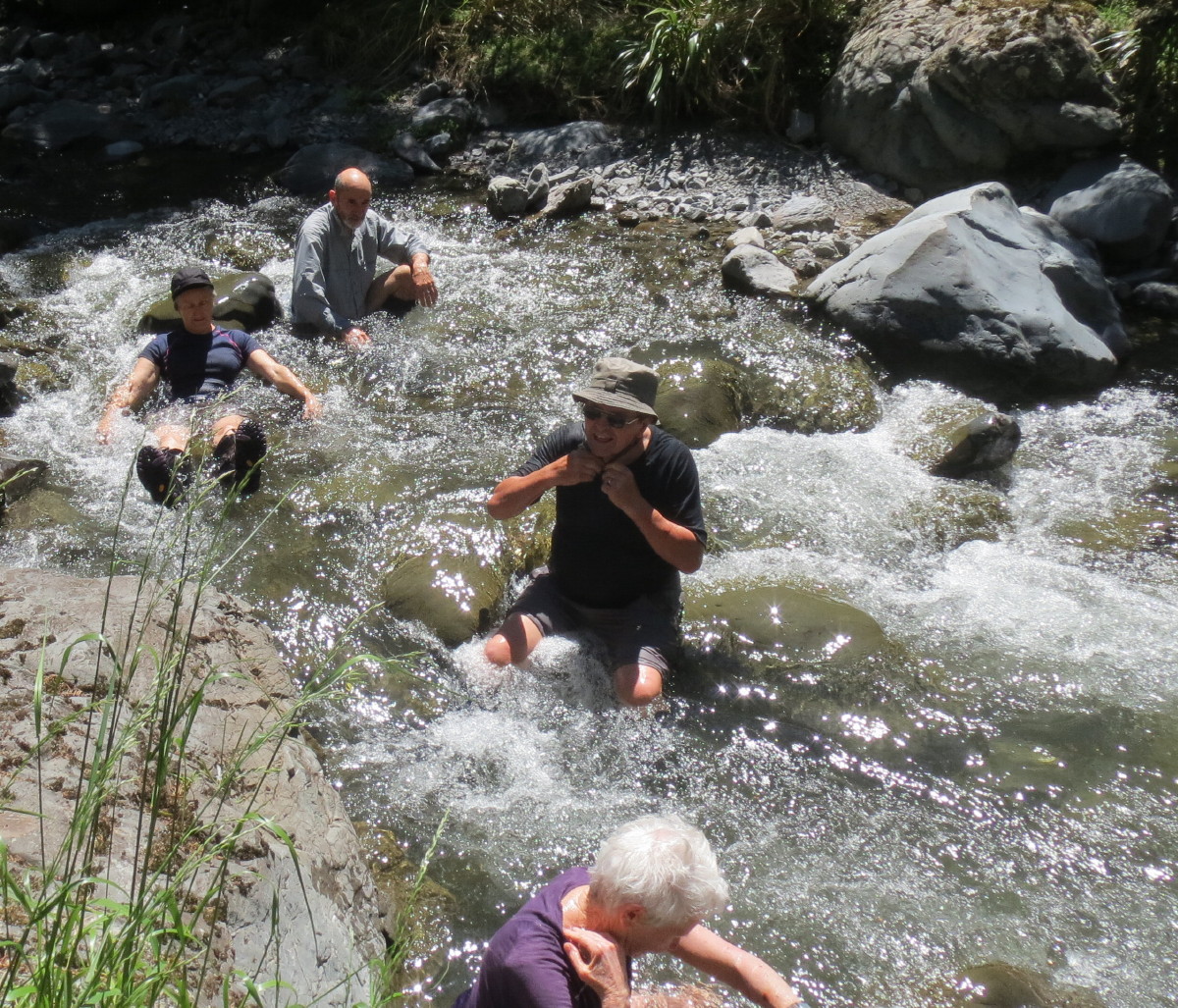 Wednesday 23 November began as a glorious fine day with a moderate wind as we set off for the start of our day’s tramping at Herricks Hut. We 24 trampers travelled down via State Highway 2 and on to Maraekakaho, Kereru Road, Mangleton and then the final approach to the Thorn Flat Station. Thanks to permission from the landowner, we were treated to some stunning landscape, which included rolling farmland with views across to Big Hill Station and the lush green river terraces, separated from us by the deep, bush-clad gorges.

Ahead were the bush slopes of the Northern Ruahines as a backdrop. These are scenes which few New Zealanders are privileged to see. The track in was winding and with a steep drop-off in places but was carefully negotiated by our two capable van drivers, Colin and Kelvin. On reaching the road end, we disembarked and set about oganising our gear. Some were just going to go as far as they felt comfortable and enjoy the company and their surroundings. Others, who were fitter, would nevertheless opt not to go the full distance which involved a fair amount of time in the river, Big Hill Stream, as they had an aversion to river work.

Few of us had ever been to Herricks Hut, let alone Dead Dog Hut. However, we had the benefit of the very experienced Ted Angove to call upon. In his laconic way, Ted told us the first section leading to the river was “a bit steep”. And so it proved. Before we set off on that part of the trip, we had a brief look at Herricks Hut, which consists of two huts joined with an overarching roof forming a porch. It is DoC-owned. 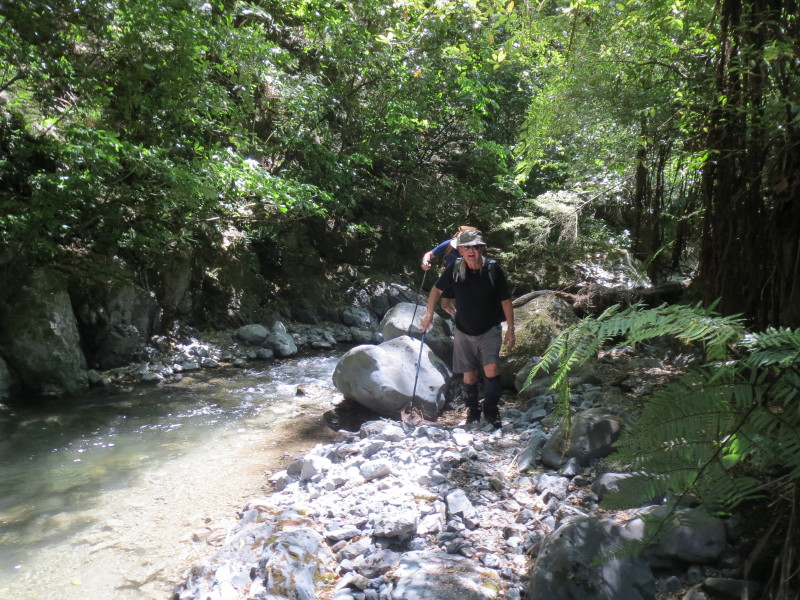 Into the trip proper and Ted was right. It is never the best to start a climb without a more gradual introduction. The hares streamed off into the distance, while the rest of us plodded along through the bush. Underfoot, the steep slope was dry but slippery with leaf litter. After attaining what seemed to be the top, we sidled along until we began a steep descent, which had us standing above a fissured, rocky cliff, at the bottom of which was a small stream. There was a significant distance down and someone had thoughtfully provided an anchored rope by which to make a controlled descent.

From there, it was up the other side to more gentle undulations before a sharp descent to the river. Again, the hares set off while the rest of us doggedly made our way into a freshening headwind and headed upstream. This river has the clear, drinkable water we would like to see in our lowland rivers, with a frame of river terraces and some more closed-in areas resembling a gorge. These were defined at the banks by outcrops of rock which made for some beautiful deep pools in places. Unfortunately, they also limited the choice as to where you could traverse and created some tricky moments.

The alternative tracks on the river bank, for when the river levels were high, were of brief duration and largely covered in scrub and debris in the form of flood-borne branches. The slower group were surprised to find that two of the faster party were returning down-river, having decided that reaching Dead Dog Hut was not their objective any longer. 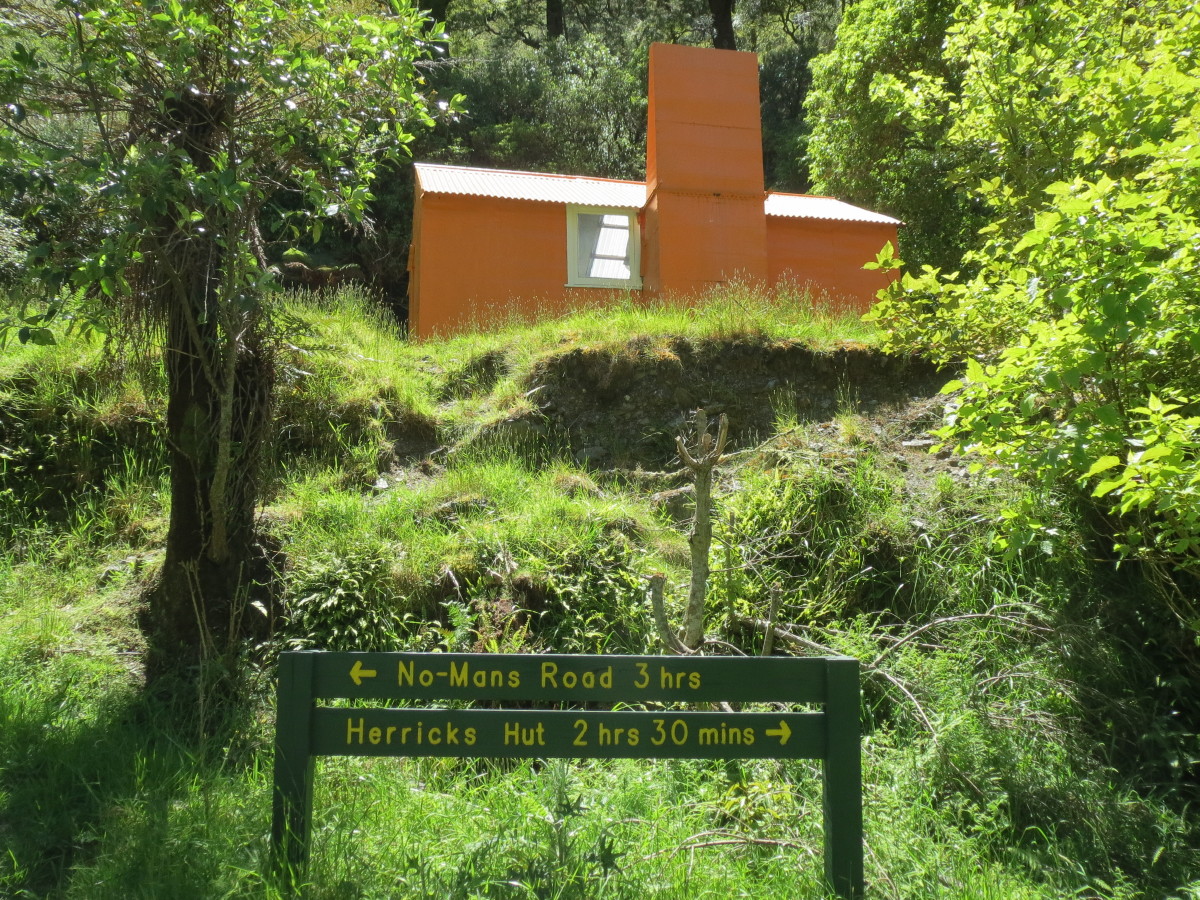 Dead Dog Hut sits on the terrace above the stream

After persuading them to join the slower group and continue upstream, we came across the rest of the faster group, who were also pessimistic about reaching the hut. We all shuffled onto a rocky outcrop at the water’s edge and debated what was to be done. The slower group were all for pushing on, while some others argued that we had been in the river for an hour and were only 40% of the way to the hut. The gritty determination of the slower group prevailed, and the entire group continued up-river. Fortunately, we had come out of some of the tight guts and the banks were easier to negotiate. We sat down for a brief drink and a bite, when one of the party produced her techy whizz-bang thingy and announced that Dead Dog Hut was only 500m further on. It was quite funny to see some people who had been dragging their butts suddenly became energised and take off at a rate of knots.

Sure enough, in a short space of time we all trickled up the river terrace to the bright orange of a good old-fashioned tramping hut. However, we had dropped off a small number of our group who had decided it was just too far on the day.

We lazed outside the hut, we dirty dozen, we band of brothers (and sisters) and enjoyed a leisurely lunch before heading back down-river. Most of us at some stage fell into the river, some in dramatic fashion but fortunately without serious injury.

While the trip to the hut had taken us 3hrs 15mins, the return was closer to the DoC signage of 2hrs 30mins. We arrived back to the vans, and weary bodies were packed on board and ferried home.

All this on a day in which record November temperatures were more than 30 degrees!

Sparrowhawk bivvy, Ruahine Forest Park, Saturday 6 August 2022 Banner Photo: The view east, towards the Wakararas and beyond On a beautiful … END_OF_DOCUMENT_TOKEN_TO_BE_REPLACED

Prologue: The author was on the Whirinaki tramp, reported on this website under the headline 'We observe a mock turtle and the rodent of Upper Te … END_OF_DOCUMENT_TOKEN_TO_BE_REPLACED

Ruahine User Group A meeting was held on Monday 25 July, in the NZDA rooms in Dannevirke.  Julia … END_OF_DOCUMENT_TOKEN_TO_BE_REPLACED

Ruahine User Group A meeting was held on Monday 25 July, in the NZDA rooms in Dannevirke.  Julia … END_OF_DOCUMENT_TOKEN_TO_BE_REPLACED

Ruahine User Group A meeting was held on Monday 25 July, in the NZDA rooms in Dannevirke.  Julia … END_OF_DOCUMENT_TOKEN_TO_BE_REPLACED

Ruahine User Group A meeting was held on Monday 25 July, in the NZDA rooms in Dannevirke.  Julia … END_OF_DOCUMENT_TOKEN_TO_BE_REPLACED