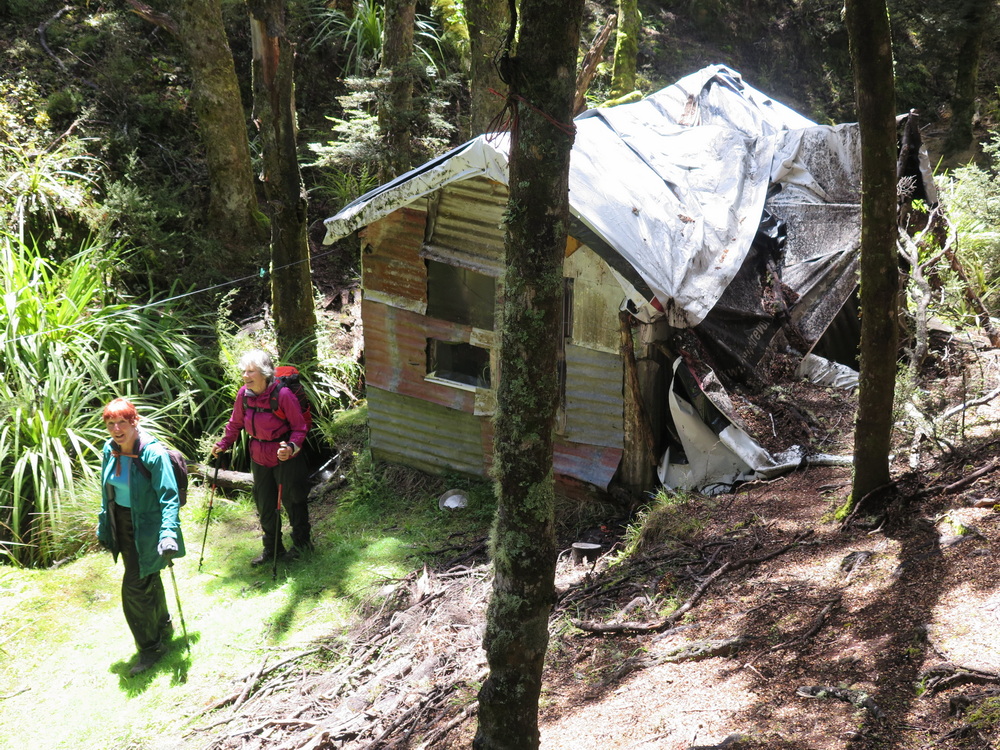 With permission from Helisika (the leaseholders) and our access fee paid, the vanload of ten eager trampers headed down the Gentle Anne Road, excited about what the Te Iringa – Roberts Hut tramp would offer. As we neared the car park, cloud hugged the tops of the ranges and with our destination under cover, the mood in the van darkened.

We shared the car park with beehives. Luckily for us, the cool and misty morning meant the bees weren’t in a hurry to get on with their work. Our group wasn’t put off by the damp conditions. We donned suitable gear and were thankful for the clothing tip from Dorothy – a good raincoat would be necessary to fend off water from the wet bush. This advice proved to be ‘spot on’ in the first few metres of the very overgrown track. As we pushed through the soggy undergrowth, we were brushed with water from both sides – just like a car being slapped by drenching rags as it goes through a car wash.

The group split up, with the majority aiming for Roberts Hut while the others enjoyed tramping to where they felt comfortable.

The track starts with a steady climb up through the bush. This climb makes up a good third of the tramp with the path levelling out in patches. As it is a private track, there were no markers. We tried to stay on the original track and this had us weaving our way in and out of the beech forest. Foraging deer had created several look-a-like tracks, making it hard for us to pick the right path. In the places where the track was completely overgrown, we made our own by bush-bashing through the wiry undergrowth.

When we stopped for lunch, those with bare knees showed off their battle scars from the sharp and prickly scrub. 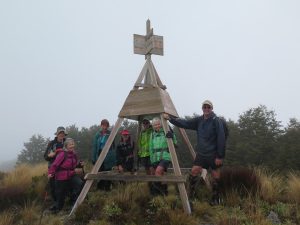 Not only did the swirling mist block any views of the promised vistas; it shrouded the beech forest, making it a sad and eerie setting. The minimal visibility made us concentrate on our immediate surroundings and ignited some trampers’ imaginations. They saw creatures and faces hidden within the nearby rocks and trees. When we reached the Te Iringa trig, John used his topo map to tell us we had just climbed to the highest point at 1324m. 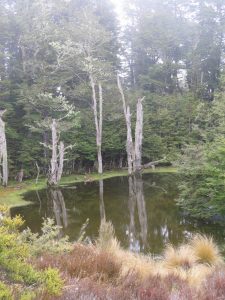 The tarn is picturesque

The still waters of a tarn nestled amongst some dead trees had everyone diving for their cameras for the perfect shot – the mist added mood to the photos. At about the same time, there was a cry of “deer” from someone. Whether it was the click of the cameras or the shout that spooked them we’re not sure, but most of us saw the flashes of white on the rumps of three sika deer as they made for cover.

Around midday, the weather came to the party and gradually lifted the misty cloak to reveal expansive views and colourful vegetation. With the mist gone, there was a transformation in our spirits – and in the sad-looking beech forest. Here the filtered sunlight enhanced the many hues of green in the various plants and mosses.

Ted did his bit for future trampers by wielding his machete and slashing the bushes that were encroaching on the track. And he shared stories about previous trips and how the land use had changed. 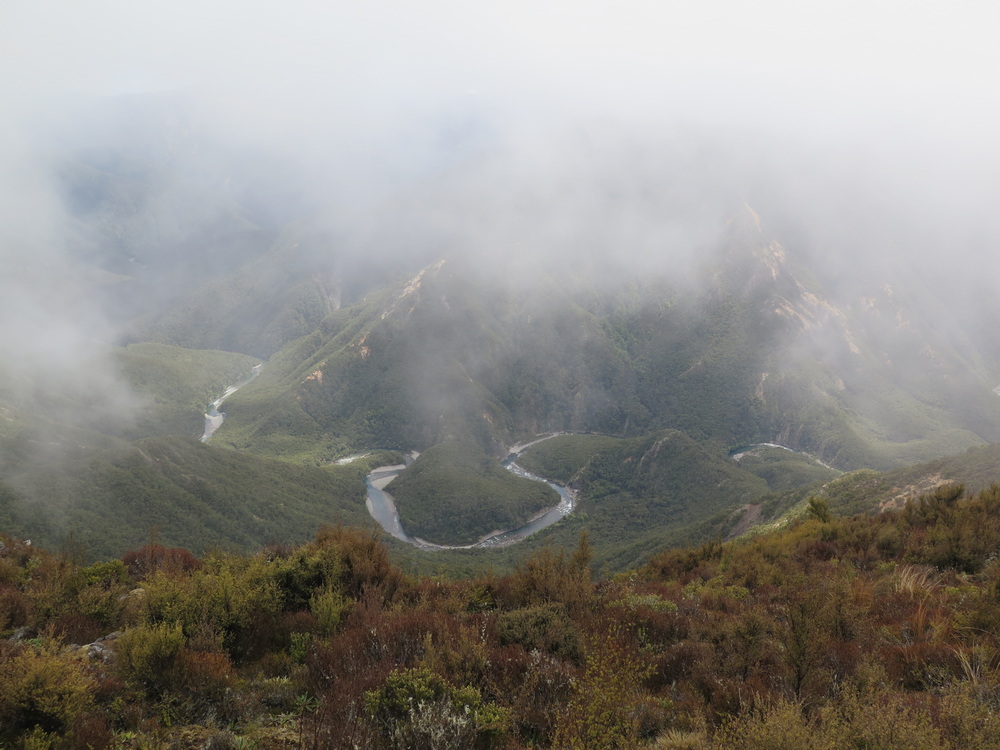 The mist lifted and the Ngaruroro can be seen

Geoffrey and Alison used their knowledge of previous tramps to Roberts Hut and the terrain to head us in the right direction. They egged us on with encouraging words – “it’s not far now” and “it’s just along there, round that corner and down a short drop”. That positivity spurred us on to forget about tired legs. Everyone in the group made it to Roberts Hut.

Our two seasoned trampers turned tour guides also took time to point out landmarks such as Kaweka J, Mt Meany, Ngamatea Station, the Tahuhunui Range and the Ngaruroro River snaking its way through the bottom of the valley. The rest of us were very grateful for these geography lessons. There was no need for them to point out Ruapehu and Tongariro, though. The two majestic mountains took pride of place in the landscape to the north.

There was a variety of birdsong with few sightings. A long-tailed cuckoo had us searching the bush heights, hopeful of a sighting. It remained elusive!

It was a day of contrasts – walking in and then out of the bush, climbing up and then going down the contours, river valleys and magnificent ranges, a cool morning and sunny afternoon and being enshrouded in mist and then having visibility as far as the eye could see.

Back at the car park, the bees were well and truly awake. Some were searching for nectar amongst our packs, so we didn’t dilly dally and got on the road. This was when we shared highlights of the day which included: the mist lifting, the views, the cuckoo call, the tarn, seeing the sika deer, the cool morning and sunny afternoon and of course everyone making it back to the van and getting their boots off!

Thanks to Marie for organising a great tramp, paying the access fee, obtaining the permit, driving the van and getting the weather just right. 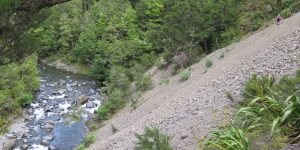 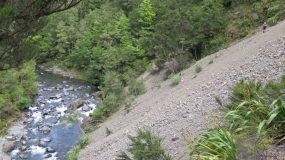