There were nine trampers for the weekend, more than the day trip. This must be a popular tramp.

With the wind blowing strongly, we decided to go up the Sunrise track and turn off for Waipawa Forks. The day was cloudy and the wind warm, perfect for tramping. We all made our way up the Waipawa River, crossing scree slopes to the bottom of the last climb up to the saddle. The buddlea is getting very overgrown and still requires a few river crossings. 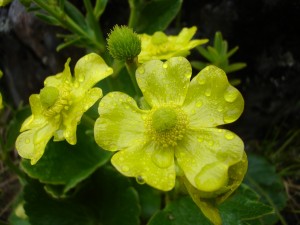 On the saddle, we quickly walked down the other side. The wind was not as strong as we had expected, but you are only on the tops for a few minutes. The track drops down quickly to the Waikamaka River and we made our way down it with the Korikori (Ranunculus Insignis – Hairy Alpine Buttercup) in flower to cheer us up. Making our way downstream, we arrived at Waikamaka Hut at about 1pm for lunch and then the five of us pressed on, continuing up the Waikamaka River and then a contributory stream. The track, when you could see it, is through deep tussock and the nasty Spaniard plant, going uphill to Rangi saddle. It made the going slower, and the legs were getting tired. On reaching the saddle, the winds were even higher than they had been earlier in the day. Good gusts made walking exciting. Yee… Ha… down the other side, and shortly into the bush. A long drop down into Rangi Creek, and then downstream for more crossings. You can see the Kawhatau River valley junction open up ahead, where you turn south to Waterfall Hut. Two huge cairns in the riverbed mark the hut site. The track crosses Waterfall Creek just before you arrive. The boots did not really get a good soaking until the Kawhatau River crossings.

Arriving at the hut at around 3.30, we quickly made ourselves at home with an open fire and the billy on for hot drinks. We all took turns to wash in Waterfall Creek. Drinks and discussion on the next six-month trip list ensued. In the late afternoon, it started to rain lightly but we were happy in our warm hut. 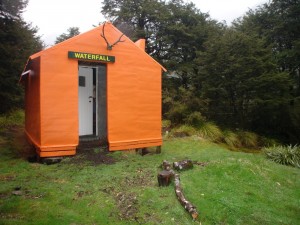 It rained all night and the creeks and rivers were up at least 30cm. But it had been a quiet night and a good sleep. The Kawhatau River crossings were not quite textbook, but we joined together and made it across the first one. The second was a little more challenging, with Alison and myself hanging off Ted, and we were up to our waists, with the river flowing fast. I ended up being wrapped around Ted, but he held on to us and we all made it across.

Quickly keeping moving, we made our way back up Rangi Creek and then back through the bush up to Rangi Saddle. At Waikamaka Hut, the others had waited for us in case anything had gone wrong (many thanks). We had a quick hot brew and an early lunch and back to Waipawa Saddle. Some took the scree slope down, catching up with the front trampers. The drizzle cleared as we made our way down to the Waipawa River.

We decided to take the route to join the Sunrise track again to avoid more river crossings, even though it is another small climb. There was a fun photo shoot at the junction before descending to our awaiting vehicles. It was a great weekend and at last I have been to Waikamaka and Waterfall huts.