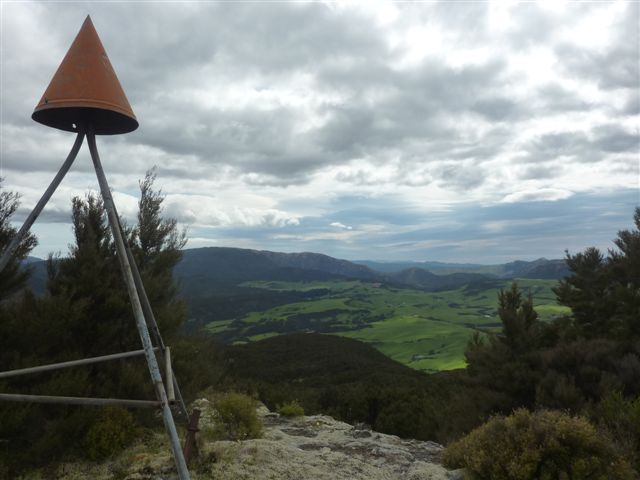 If we had believed the weather forecast, we would have chosen an alternative trip for the day – but we didn’t. When we got out of the van at Taruarau River Bridge on the Taihape Road, there was hardly any trace of the predicted gale force winds. The sky was a little ominous, however. So 12 optimistic trampers set off up the north end of the range on what I recalled as a moderate, shortish climb to the trig. Well, my memory and/or my legs aren’t what they used to be. It was a stiff climb and it took nearly an hour. Needless to say I enjoyed the chance to take breath at the trig and enjoy the view back down to the river and the road and the valley on the west of the Gentle Annie. 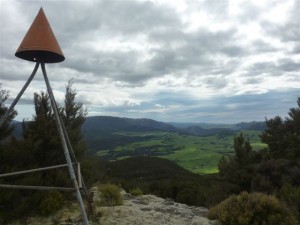 From the trig, the track follows south along the length of the range, undulating but more up than down. We were generally in open grass and tussock but unfortunately the great distant views of the central north Island mountains were not to be had. They were clagged in. We could see down into the gorges of the Taruarau River down below us, though. The end of the range is a steep drop-off down to the river and marked the end of our morning’s tramping.

Lunch was taken early in a tussock basin sheltered from the strengthening wind. Lunch was a bit longer than the norm as we had time, and in my case at least, I wasn’t looking forward to the climb to the high point of the track on our way back.

The top of the range is a broad ridge, previously in grass but now regenerating bush. The ground cover is tending to alpine with mountain daisies – Celmesia – dominant. Three different orchids were in flower and a number of small, although mature, Spaniards (a bit like hedgehogs) were again located.

Everyone was back at the van by about 2.30pm with the earlier group enjoying a rest out of the now boisterous wind at the “hut” site at the track end. It was disappointing not to have been able to see Ruapehu and Ngauruhoe, as that is a feature of this trip.