Alison and Bruce drove seven trampers to the Clements Mill Road end in the Kaimanawas. Then Simon and Alison shuffled cars so there was one vehicle at the Poronui Station gate, where we were to finish. This gave the rest of the group a head start. The first hour or so was a steady climb on a good track to a grassy clearing where the old Te Ringa Hut once stood. This was a good possy for morning tea.

The track was mostly in good condition but there were plenty of small twigs lying around to get tangled in our boots. A huge slip, which has been there for a few years, meant a steep crawl down the bank, over a stream and a goat-scramble up the other rocky side. It was here that Alison and Simon caught us up. 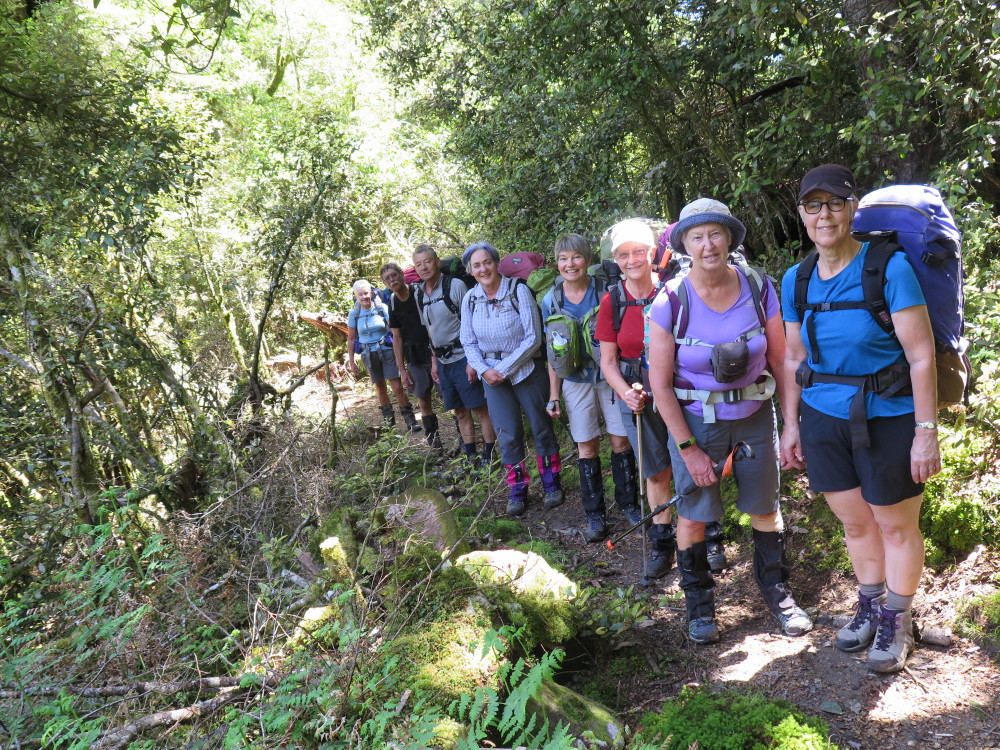 Not long after this, it got rather hot so we decided it was time for lunch, which we had on the side of the track in the sun amid stunning bush with many huge beech trees. And there was one spot which made for an excellent ‘Kodak’ moment because we could see all three mountains through a huge gap in the trees. At times, the windfall over the track made for some clambering and limbering over and under huge tree trunks and branches. This tested the flexibility of us older folk! We all refilled our water bottles at the little streams, because the warm temperatures meant lots of stops for a drink.

Once we’d reached the swing bridge, we knew it was only about another three hours and mainly downhill following the Kaipo River to the hut. It was now seven hours since the start, so we all longed to get the boots off. Everyone was hot and a little thirsty. 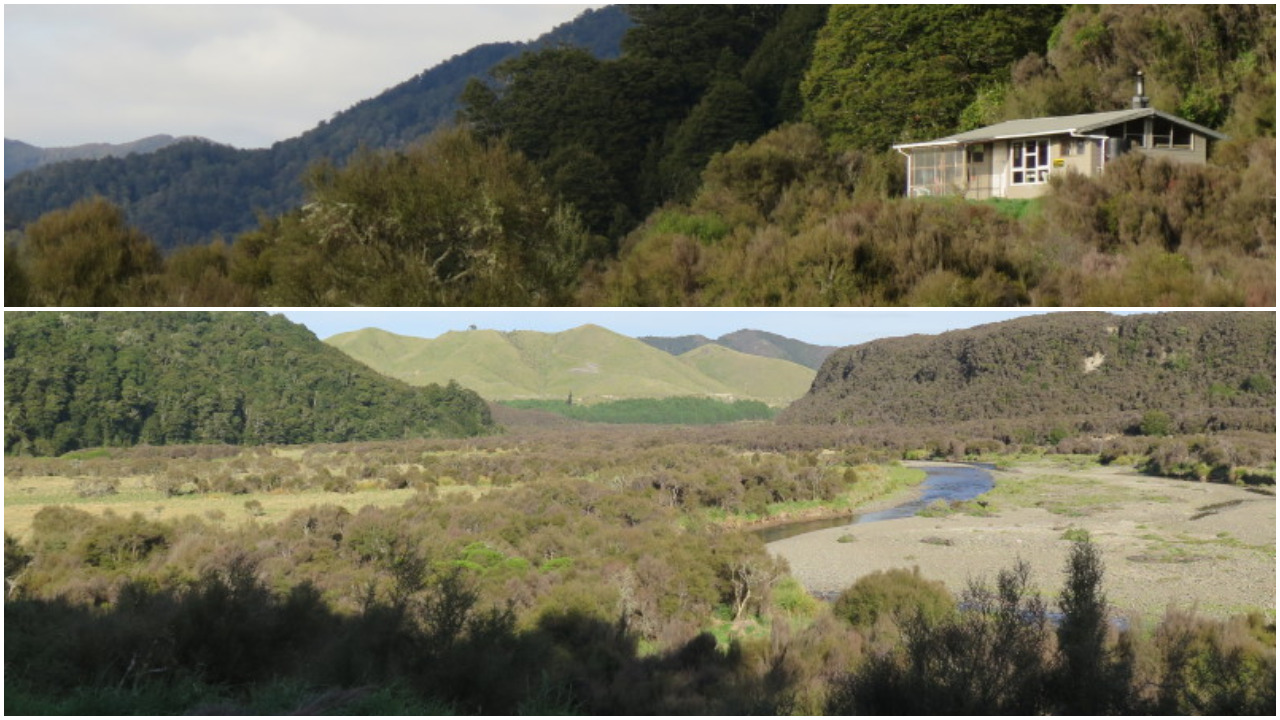 Top: The hut on the river terrace. Bottom: The view from the hut

When we arrived at the 12-bunk hut, seven people were already there, which meant Juliet and Bruce camped down below, while Simon and Lynette choose to sleep on the floor. Six more arrived during the evening, three camped below and the other three disappeared. The hut sits up high and overlooks the Oamaru River, with the Mohaka’s source not far away.

Three young fishermen, who had been fishing all day without any luck, entertained us with a cookery demonstration: pancakes and bacon for dinner. Certainly not up to Paul Exeter’s standard! Rum cake (as a homage to our tramping American couple) should have been on the dessert menu for us, but it was still in the fridge at home! 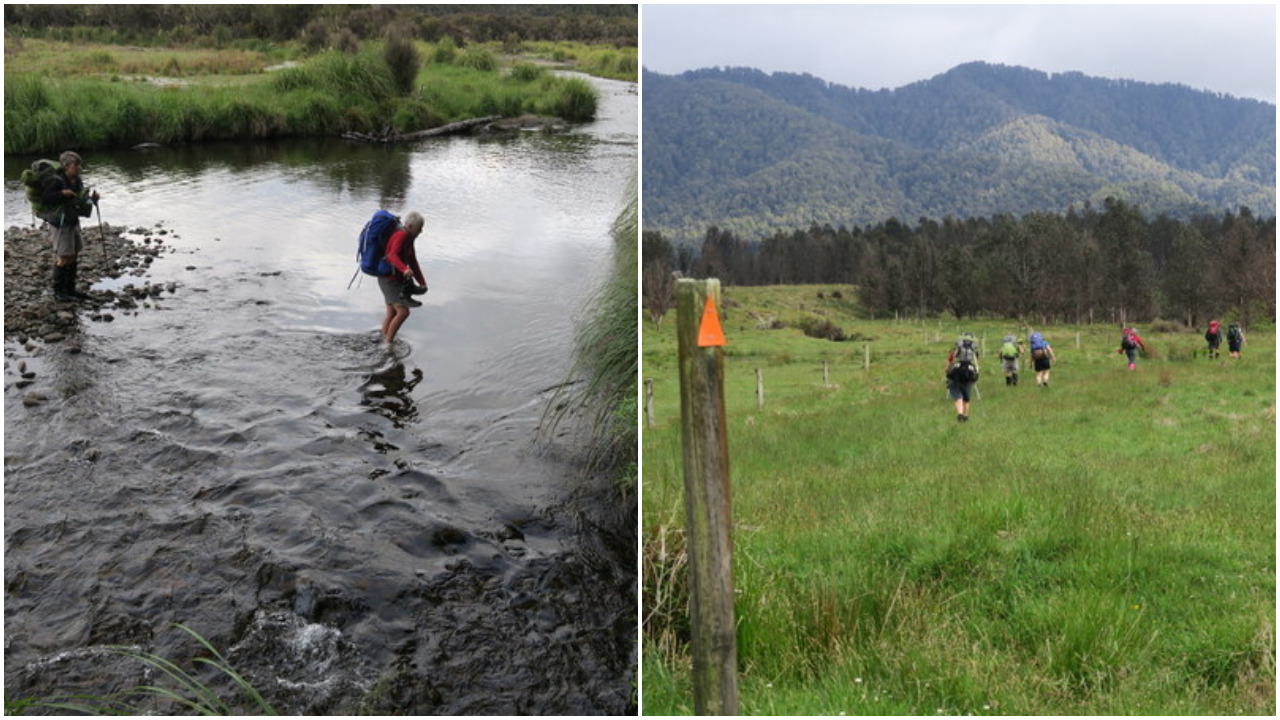 Next morning, we were the last to leave, so cleaning up the hut was our responsibility. We knew it was going to be a boring walk through Poronui Station. However, with fresh legs and cloudy, cooler weather, the walk seemed to be less dull and we made it out in just over three hours. Another shuffle of cars, thanks to the drivers, and we were on our way home with a lunch stop at Tarawera.

Sparrowhawk bivvy, Ruahine Forest Park, Saturday 6 August 2022 Banner Photo: The view east, towards the Wakararas and beyond On a beautiful … END_OF_DOCUMENT_TOKEN_TO_BE_REPLACED

Prologue: The author was on the Whirinaki tramp, reported on this website under the headline 'We observe a mock turtle and the rodent of Upper Te … END_OF_DOCUMENT_TOKEN_TO_BE_REPLACED

Ruahine User Group A meeting was held on Monday 25 July, in the NZDA rooms in Dannevirke.  Julia … END_OF_DOCUMENT_TOKEN_TO_BE_REPLACED

Ruahine User Group A meeting was held on Monday 25 July, in the NZDA rooms in Dannevirke.  Julia … END_OF_DOCUMENT_TOKEN_TO_BE_REPLACED

Ruahine User Group A meeting was held on Monday 25 July, in the NZDA rooms in Dannevirke.  Julia … END_OF_DOCUMENT_TOKEN_TO_BE_REPLACED

Ruahine User Group A meeting was held on Monday 25 July, in the NZDA rooms in Dannevirke.  Julia … END_OF_DOCUMENT_TOKEN_TO_BE_REPLACED