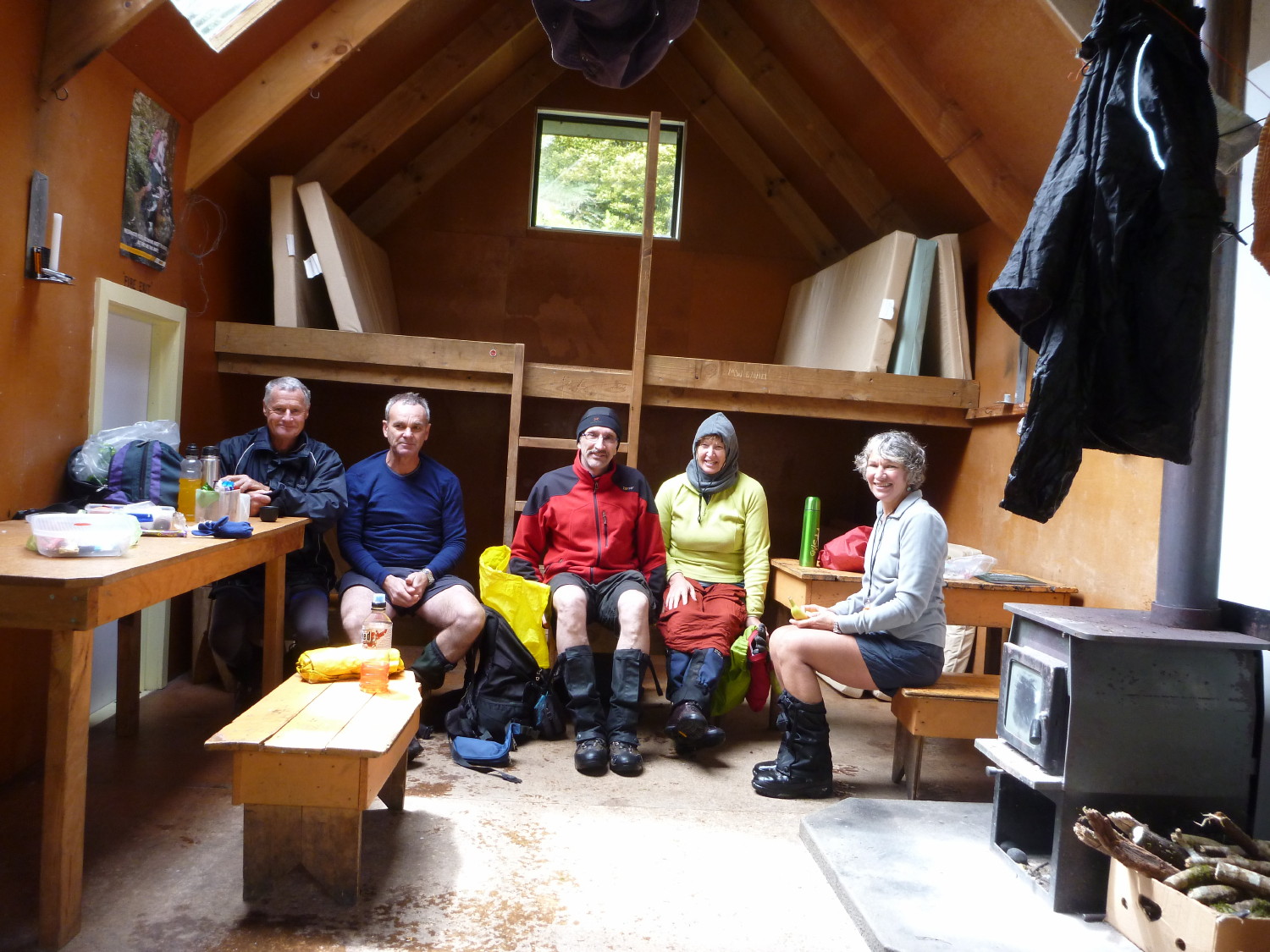 The weather forecast did not mention high winds and snowy sleet, but that is what we had to contend with on this tramp. It was evident on travelling up Kashmir Road that the planned trip up to Pohangina Saddle and then dropping down into the South Branch of the Tukituki was not going to happen. The van door could hardly stay open in the high winds. So Plan B, up to Daphne Hut track, was the next best option. 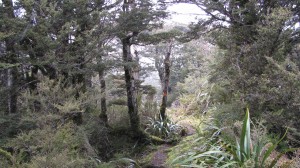 There were 15 out, and 13 set off over the Moorcock Stream, through the bush reserve and up the ridge on the old, now-defunct track over farmland. Please note that permission is strictly required to use this track. The main track continues the descent to the junction of the South Branch, with the Tukituki. There, five of us decided to go and visit Daphne Hut. The route is about 20 minutes up-river on the true left. The track sign to Howletts Hut can be seen just across from a small tributary stream before reaching the hut. 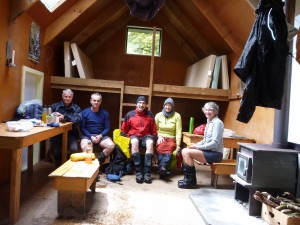 We lunched inside, and watched a rain squall pass through, glad that we were under cover. The others who had also dropped down to the Tukituki had not wanted to get their feet wet, and probably had a quick lunch before returning back up the main track.

For the five of us, the walk downstream seemed much shorter than the walk up. The rain had also stopped. We made short work of the climb back, without stopping, as we needed to make up time.

We reached the van and were all soon on our way back home with a coffee at the Chook and Filly, after several weather seasons in one day. Jackets on and off, all day…

Sparrowhawk bivvy, Ruahine Forest Park, Saturday 6 August 2022 Banner Photo: The view east, towards the Wakararas and beyond On a beautiful … END_OF_DOCUMENT_TOKEN_TO_BE_REPLACED

Prologue: The author was on the Whirinaki tramp, reported on this website under the headline 'We observe a mock turtle and the rodent of Upper Te … END_OF_DOCUMENT_TOKEN_TO_BE_REPLACED

Ruahine User Group A meeting was held on Monday 25 July, in the NZDA rooms in Dannevirke.  Julia … END_OF_DOCUMENT_TOKEN_TO_BE_REPLACED

Ruahine User Group A meeting was held on Monday 25 July, in the NZDA rooms in Dannevirke.  Julia … END_OF_DOCUMENT_TOKEN_TO_BE_REPLACED

Ruahine User Group A meeting was held on Monday 25 July, in the NZDA rooms in Dannevirke.  Julia … END_OF_DOCUMENT_TOKEN_TO_BE_REPLACED

Ruahine User Group A meeting was held on Monday 25 July, in the NZDA rooms in Dannevirke.  Julia … END_OF_DOCUMENT_TOKEN_TO_BE_REPLACED