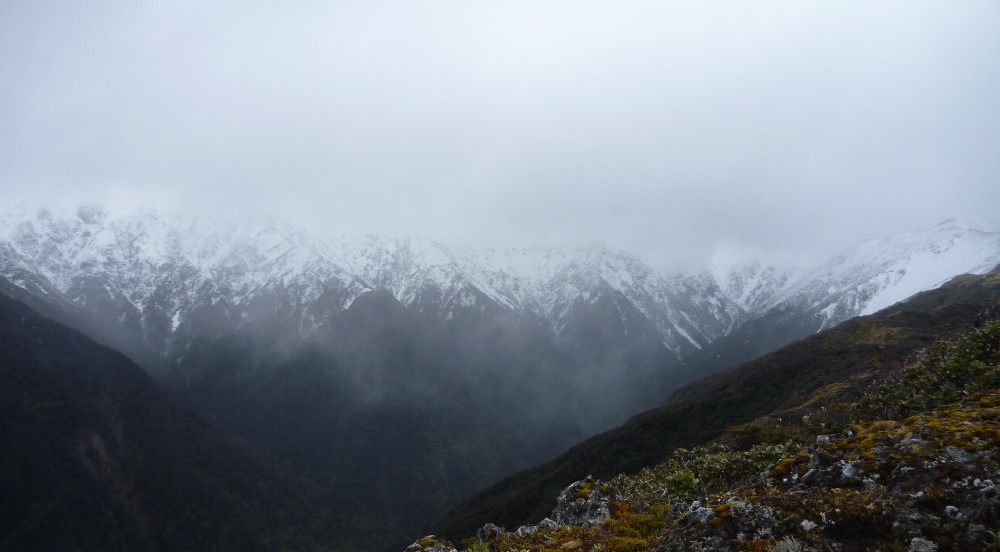 Hawke’s Bay has been experiencing the normal two months of equinox winds, which happen in October/November; but this year, they seem to have been going on for ages.

This did not deter us from going back to a track which we did a few years ago. Rosvall’s Track starts from the banks of the Tukituki River, but it took us two hours to reach it. 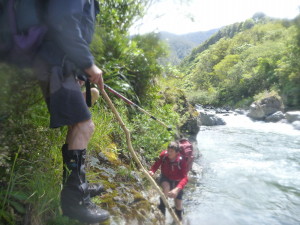 Soon after leaving the DoC signpost at the end of Mill Road, and heading down the farm track, we came to a halt. The farm track had been washed out, and a diversion up and around the slip was marked with pink ribbon. On rejoining the farm track, it heads down to the river, and track markers take you across to the Tukituki River. The river looked to have a lot more water in it that we have seen before, but it was running clear and fast. We negotiated bluffs and crossings, sometimes requiring us to link together in twos. 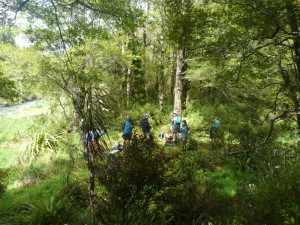 The riverside start of Rosvall’s track

On reaching the start of Rosvall’s Track, we all had a snack break before tackling the route. I headed up first, and got around a serious windfall near the bottom. The rest of the track was good. At one point you could see the tops and a small patch of snow. I was hoping that the squalls of hail and the drizzle that we had had when coming up-river would be gone by the time we reached the tops.

Then after 1hr 20 mins, I put my head over the top. Jeez it was blowing, but the view was fabulous: the snowy Sawtooth and the range north, and Black Ridge. I quickly took a few photos and I was just in time because, ten minutes later, the ranges had all clagged in. Hail stung the face when I took a second look.

We assessed the track to Tarn Bivvy, our original intended destination, which is completely exposed to the winds and concluded that it would not be a good idea. We all donned overtrousers and jackets and other warm clothing and decided to have a lunch break back down the track, where the wind was not so loud and it would be a tad warmer. 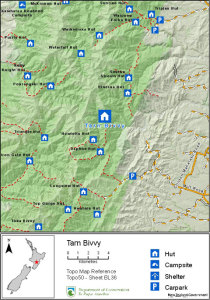 It was a quick lunch break in a sunny flat spot, before we continued back down to the river. Heading back down took just as long as coming up the river. A couple of hunters were going up, intending to hunt Government Spur.

Some of us took a short cut over a farm track, which turned into a long cut, as we had to turn around. A big gully was in our way, and so we wasted half an hour, trudging back through the flowering lupin and up the farm track to rejoin our mates.

It was a pity the we never made it to Tarn Bivvy; the winds and the time taken getting to the start of Rosvall’s Track had made this too difficult. Still, we got a good view of the snowy tops in late November…