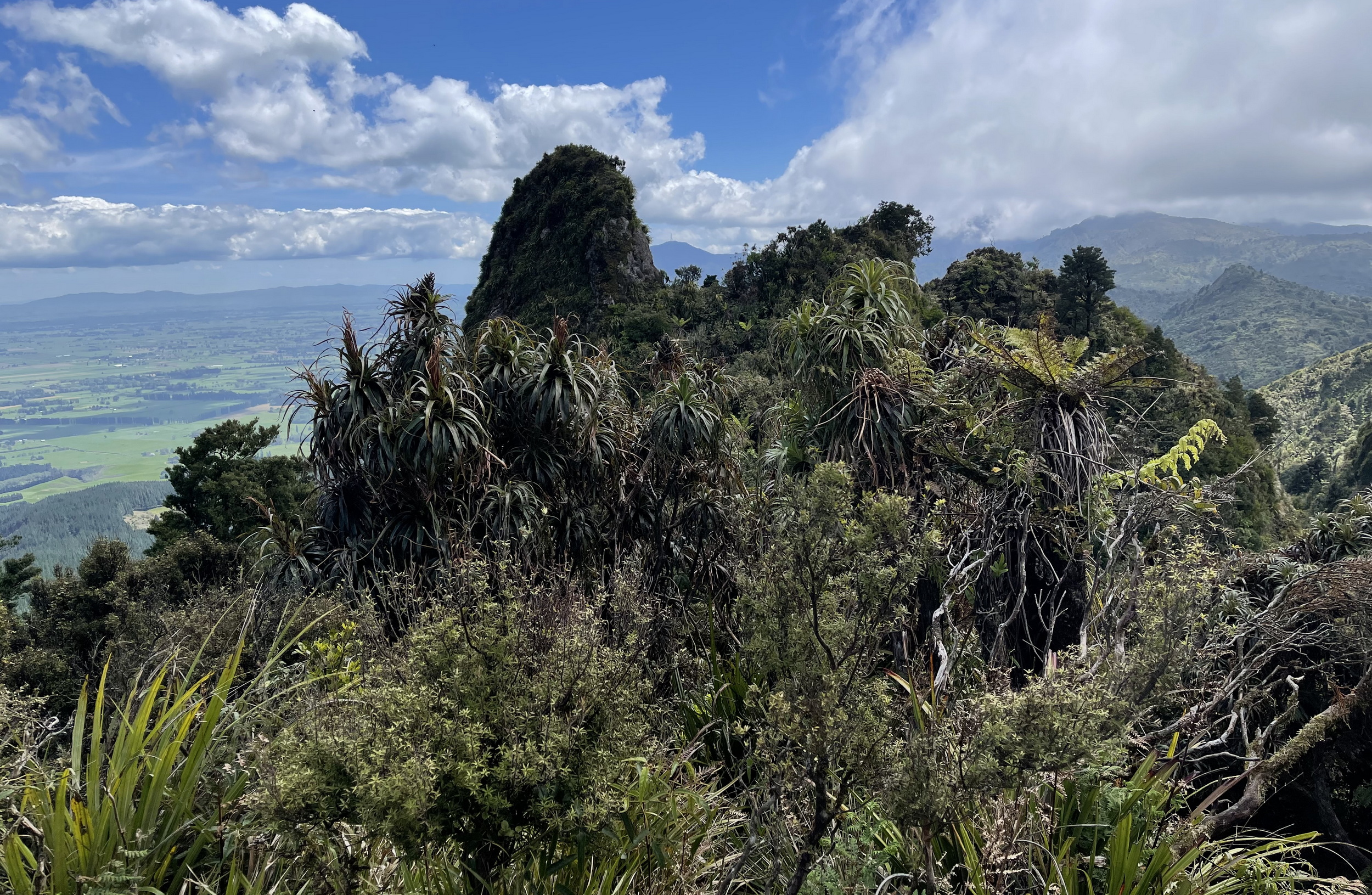 It’s been about 12 years since our club last visited the Kaimai Range separating Waikato from the Bay of Plenty. A three-and-a-half hour drive on Monday morning (with a coffee stop at Tirau) took our party to Wairakau on the western side of the range a little south of Te Aroha.

Here we met our shuttle hosts, Sue and Pete of Bikinghikingshuttles. They provide logistical support for cyclists and trampers in the area. They are experienced, capable trampers who had played a major part helping us plan the trip, and would provide transport to our track start and from the pick-up point. Bruce’s and Alison’s cars were parked up securely. 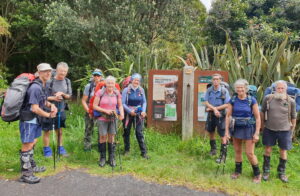 At the start of the Waitawheta track

An hour’s drive in the van went part-way through the Karangahake Gorge to the start of the Waitawheta Tramway Track on Franklin Rd. Sue had assured me the 50mm of rain the previous day would not adversely affect our walk up the Waitewheta River to Waitawheta Hut.

This track follows a tramline used in the early 20th Century to extract kauri from the valley. A sawmill site is 10km and eight swing-bridge crossings In. This a beautiful, well-maintained track, rich in history, through lush bush on a gentle grade. Old rail sleepers were sometimes still evident. Despite a forecast of thunderstorms, we had no rain but humidity was high. We shared the large modern hut with two others on a one-night stop-over. On a wet dripping bank not far from the hut is a glow-worm colony, which provided us with night time interest. 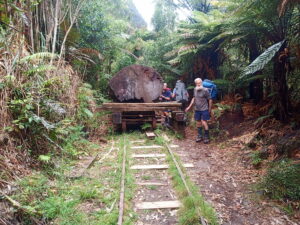 This was the perfect start to our adventure.

Morning of day 2 dawned clear of the night’s low cloud. We were up and away by 7.45. Back-tracking across the bridge, we picked up the North/South track and continued along the upper Waitawheta River. It was reasonably easy going apart from a few slippery, rocky sections and a couple of side streams to cross.

Large tawa, the occasional kauri and rimu trees made a beautiful canopy while lush ferns thrived in the damp undergrowth. After an hour or so, we slowly left the river, climbing to the muddy plateau of Cashmore’s Clearing. It was obvious work was in progress to boardwalk this muddy area – lots of planks, half rounds and bales of shingle in readiness for the next working bee. 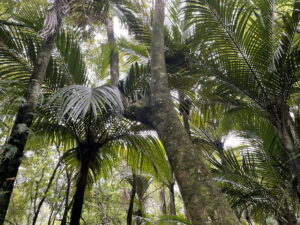 The nikau palms along the Wharawhara Stream

Walking across the plateau, we had glimpses out to the east of Tauranga Harbour, before a plunge downhill back into the forest and the headwaters of the Wharawhara Stream. The stream, or river as it was now becoming, had to be crossed several times, which made for wet socks and boots but with the day once again being warm and humid, nobody seemed to mind.

Slowly the surrounding bush began to change; it became more tropical. The tawa canopy gave way to broadleaf, dracophyllum, rewarewa and nikau palms. At one stage, we were in a dense nikau grove. Simon and I spotted a huge puriri tree, its large red trumpet flowers covering the ground.

Lunch was had at the track junction close to Wharawhara Rd car park. A gentle climb on the Wharawhara link track to the junction of Rereatukahia Hut track, which starts at Hot Springs Road, another popular entry point into the forest park. 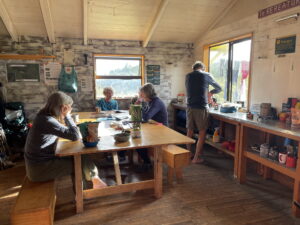 A steep final 200 metres up some very deep steps brings you out into the open tops and a short distance from the hut. At just over 600m, Rereatukahia is perhaps the highest hut in the park and has a character all of its own. The group had taken about seven hours, so a long day. It was nice to kick off the boots, get the billy on and relax after a very enjoyable day.

We knew today was going to be a reasonably short tramping day and we thought ‘fairly easy’, so we weren’t in any hurry to pack and get away early.

Most were up and breakfasted by 8am. The weather was glorious so we had thought of a quick hike up to the high point Wahine, on the old North/South Track which is now closed because of kauri die-back; but we decided walking up to Baldy was sufficient, as Wahine would have taken us another 30-45 minutes one way, and Baldy was only a 15-minute climb from the hut. 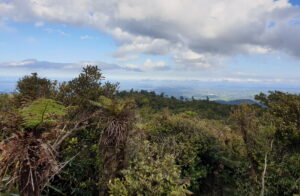 The view from Baldy towards the Bay of Plenty

On a clear day, the views are said to be fantastic. Unfortunately for us, because we were so early, there was low mist so the views out west and east were hazy; but with time up our sleeve, we waited and it didn’t take long for the mist to start burning off and we could work out, in the hazy distance, Mount Pirongia and (we think) Mount Karioi. On a clear day, you can see Mount Taranaki, but we weren’t in such luck.

After spending half an hour enjoying the views, we headed back down to the hut where Bruce and Simon were waiting, finished packing our gear and were back on the track heading to Motutapere Hut by 9.30.

It was another day of high humidity; it felt like at least 80% so tramping was a bit of a challenge. We stopped for our first short break at about 11am at a spot where we could enjoy views out west to the Hauraki plains and back from where we had come from. 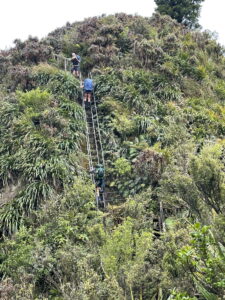 The ladder was exciting

After this, the climbing really started. It wasn’t particularly steep but the constant ups and downs and ups and downs, in Simon’s words, ‘were like walking on the back of a camel’. They were very tiring. We even had a bit of a rock climb, so careful footing was needed. And if you suffer vertigo, then this climb isn’t for you, as we also had a steel ladder to descend. It was pretty exciting stuff and good experience.

After all this upping and downing, we decided to stop for lunch about 700 metres from the hut, then with a very quick, steep descent arrived there at 1.30pm, so we had all afternoon to fill in.

Motutapere Hut is a three-bunker but the mattress storage ‘Glory Box’ could serve as another bunk and there is enough floor space for at least three sleepers. The hut has a new deck, with 2cm gaps between the boards; so you don’t want to drop anything. It’s not that easy to retrieve – as I found out.

Bruce, Julia and Simon chose to bunk for the night. Alison, Robyn and Les found suitable places to tent near the hut. Di and I camped on the helipad, a short walk up from the hut, where we could enjoy the views out to Mount Maunganui, Tauranga and Matakana Island; the night lights were quite beautiful.

We sat around in the hut that evening, chatting, comparing packs and dehy foods and finishing off Simon’s chocolate rations before hitting our sleeping bags at about 8.30pm. 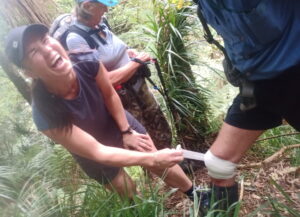 At the helipad, Lynette and I packed up our gear and left the tents to dry out a bit before going down to the hut for a welcome cuppa and breakfast with the others.

Sue and Peter had offered to take us down off the mountain range by a shorter route than shown on the map, which was really kind of them. We thought we should be ready at 8.30am and – hey presto – they appeared at exactly that time. We let them get their breath back, as they’d made it up the steep hill in one hour and 25 minutes!

When we set off the track was narrow but good, in thick bush. The change in the plant-life was almost immediate, leaving behind the ferns, epiphytes and many cabbage trees. The track became very steep quite quickly, but the leafy soils and roots were not very slippery.

However, poor Simon whacked his knee, which we initially ignored; but when he said there was a lot of blood, we thought we should stop and check him out. Yes, plenty of blood but, being a brave man and with Sue’s first aid kit put to use, we were soon travelling again.

There were some large trees including rimu, rata and mountain five-finger. About an hour after leaving the hut, it began to level out a bit and we got some fabulous views across lots of nikau trees, dense flax, a couple of small lakes and the plains. There were several kereru and warblers. I’ve no doubt there will be lots of kereru in a few months when the nikau produce their berries. 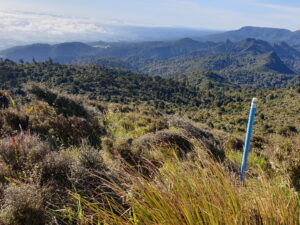 The narrow track became a bit rocky and continued down, then suddenly we were in the pine forest and most of the descent was over. It was a 30-minute walk through the pines and down the forestry road. Before we knew it, we were on farmland and at the van. The descent only took two hours and was a much shorter walk than the route we’d planned on the map.

This was totally new territory, so we have recorded the track – it’s one that you’d otherwise need to be shown. A huge thanks to Sue and Peter!

We were happy to be almost on our way home but already planning to return next year to complete the southern end of the range. 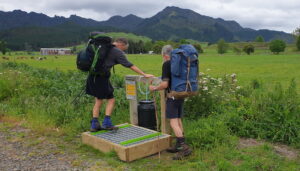 It was such a lovely and varied tramp, very different to our usual local tramping. This area definitely deserves more exploration.

Sue and Peter took us back to their place where we attempted to clean ourselves up a bit and put on fresh clothes, stuffing smelly boots and socks into plastic bags before setting off at about 11.30am. It promptly started raining – how lucky we were to get that far before it began!

Sue told us about a nice café in Putaruru called The Wooden Farmer, where we had lunch and fabulous coffee. We arrived back in Taradale at 4pm with fond memories of a great four days, and already thinking about ‘what’s next?’

Aranga Hut On Saturday 14 January the tramp was changed to a loop in the Northern Ruahine Range. … END_OF_DOCUMENT_TOKEN_TO_BE_REPLACED

Aranga Hut On Saturday 14 January the tramp was changed to a loop in the Northern Ruahine Range. … END_OF_DOCUMENT_TOKEN_TO_BE_REPLACED