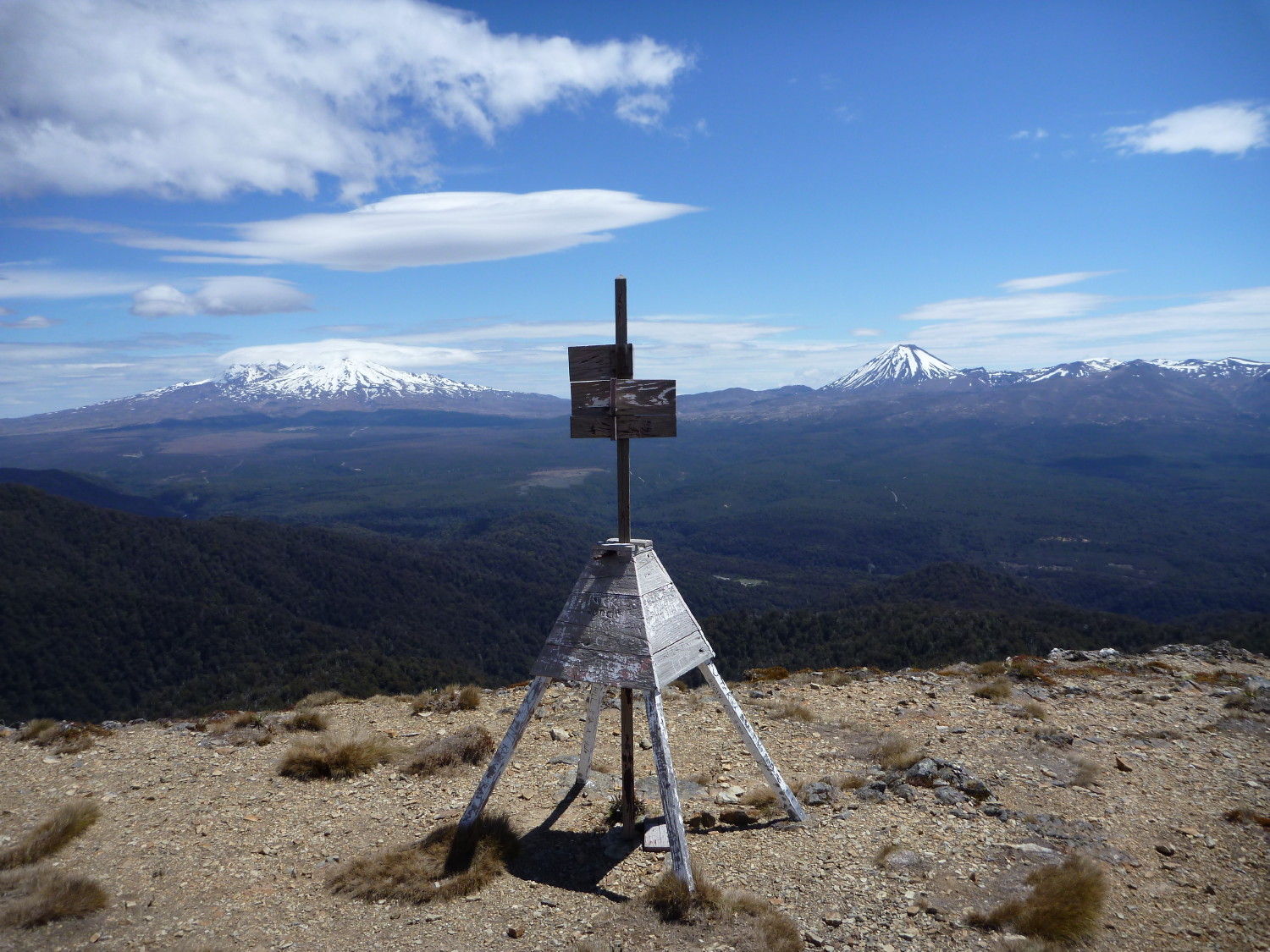 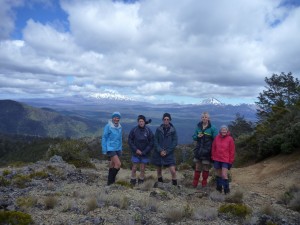 Ten of us started from the Umukarikari car park on Kaimanawa Rd, heading for Waipakahi Hut, which has 12 bunks. We were all carrying sleeping mats and prepared for a night out. The Umukarikari track heads uphill for about two hours, with views of Lake Taupo on the way. On emerging from the beech forest, there are fantastic views of Ruapehu, Ngauruhoe and Tongariro and the central Kaimanawas to the east, and Urchin summit to the south. State Highway 1 is also clearly visible, and the cars travelling along it.

So we have the best views for our two days tramping on the tops, and the new blue track markers signify that track maintenance has been carried out. Just out of the bush, we decide to have lunch in a spot out of the cold wind. The Umukarikari range is a rolling landscape of rock with the occasional tussock. The Kaimanawa Mountains, with their series of ranges, look vast and endless. The track sidles around the base of Sharp Cone, and then it is up a scree slope to the top. From here, it is a steady walk admiring the views all the way along the tops. Side ridges obscure the Waipakahi hut and the river, but in the early afternoon they come into view. 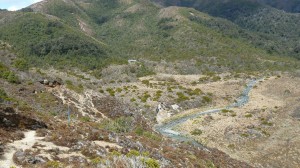 I duck behind a rock trying to get out of the wind, whilst waiting for Les to join me. We decide to carry on until we descend off the tops and find a place that offers more wind protection. We have met a young hunter out for a day’s walk/hunt, and a couple also heading for Waipakahi hut tonight.

The walk from the Waipakahi River crossing up to the hut is filled with anticipation. We were last here in January 2009 when we did the Kaimanawa – Kaweka traverse. Wow… things have improved, with a newly extended deck. We settle in and enjoy the afternoon sun. Another two trampers arrive, and we organise the sleeping arrangements. They have never encountered such a large and noisy group before. 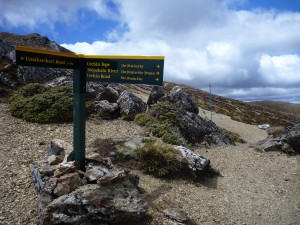 Our original plan had been for some of us to return via the Waipakahi River, and then up to the Urchin; however, we decided to do the re-opened track between the Umukarikari track and the Urchin track. We have two vehicles and two trampers/drivers who are prepared to connect us.

After being hammered by cyclones Bernie and Bola in 1982 and 1988, Urchin and Umukarikari tracks in the Kaimanawa Forest Park have finally been reconnected. The tracks suffered heavy damage in the storms when massive numbers of trees crashed to the ground and the section of track, approximately 5.5km long, from Sharp Cone (1481m) on the Umukarikari Range to Urchin (1392m) became impassable. (Alistair Hall, Wilderness April 2009) 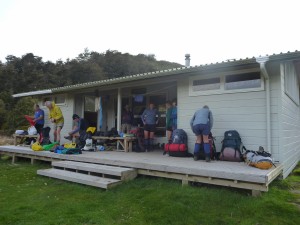 The next day, we return up to the tops of the Umukarikari Range, again stopping to take photos and take a bearing on what we think is the Kaweka Range in the far distance. From the track junction, the ridge and Urchin tops are clearly visible, an easy walk to a small saddle and then a small ascent back to the tops. The DoC track timing is 2.30 – 3 hours, but we walk it in 2hrs 10 mins. It was easy going, but we marvelled at how difficult the track cutting must have been, as the bush is dense. The track winds its way through trees and a few undulations before we reach the bushline, after which it meets the junction for the river track. We stop and have lunch overlooking the river, again out of the wind, which is thankfully warmer than yesterday. 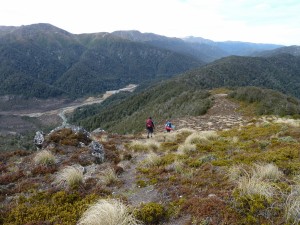 Walking across the Urchin tops, Simon sees the shiny object on an opposite ridge top. He had seen it yesterday, and we had speculated about it being a hut or space ship. It probably is a solar panel for a weather station, and it glints in the sun. We quickly made the trig post and posed for pictures (again), and then made a quick descent off the tops, through some lovely bush and trees. At times the Urchin track is 10ft wide, a contrast with the ridge track we had just traversed, which was narrow. At last we hear voices and arrive at the car park. We had done the whole walk in 6hrs 40 mins and were all pleased that we had walked the loop track, and covered new ground. 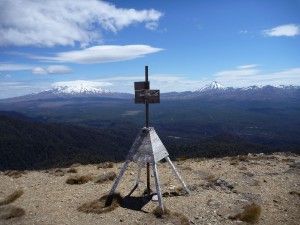 The weekend had been one of spectacular views, new tracks, improved huts, and – best of all – ten of us enjoying the weekend tramp.

Sparrowhawk bivvy, Ruahine Forest Park, Saturday 6 August 2022 Banner Photo: The view east, towards the Wakararas and beyond On a beautiful … END_OF_DOCUMENT_TOKEN_TO_BE_REPLACED

Prologue: The author was on the Whirinaki tramp, reported on this website under the headline 'We observe a mock turtle and the rodent of Upper Te … END_OF_DOCUMENT_TOKEN_TO_BE_REPLACED

Ruahine User Group A meeting was held on Monday 25 July, in the NZDA rooms in Dannevirke.  Julia … END_OF_DOCUMENT_TOKEN_TO_BE_REPLACED

Ruahine User Group A meeting was held on Monday 25 July, in the NZDA rooms in Dannevirke.  Julia … END_OF_DOCUMENT_TOKEN_TO_BE_REPLACED

Ruahine User Group A meeting was held on Monday 25 July, in the NZDA rooms in Dannevirke.  Julia … END_OF_DOCUMENT_TOKEN_TO_BE_REPLACED

Ruahine User Group A meeting was held on Monday 25 July, in the NZDA rooms in Dannevirke.  Julia … END_OF_DOCUMENT_TOKEN_TO_BE_REPLACED