Nine club members in two vehicles left EIT at 7.30am on Hawke’s Bay Anniversary Day, heading for DoC Kawhatau Base, via Taihape and Mangaweka. The weekend’s weather forecast was not promising, with rain forecast over much of the country. We stopped for coffee in Taihape and collected the hut key in Mangaweka.

The weather was cloudy but clear. Julia and Geoff had decided to do an ‘overnighter’ via the Hikurangi Range, weather permitting, so the group drove to the end of Mangakokeke Road and all headed for Purity Hut from the car park, at about 11:30am. It’s quite a steep climb through farmland, then native bush and finally into tussock, near the tops. Purity Hut is a nice, new, six-berth DoC hut just above the bush line, with wonderful views towards Taihape, Ruapehu, Ngauruhoe and Tongariro. Unfortunately for us, cloud shrouded the tops above the Central Plateau. 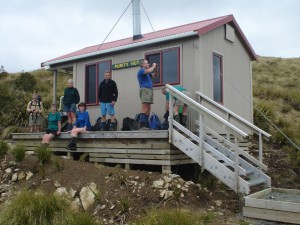 The weather was improving all the time and Julia and Geoff headed for the tops, through Wooden Peg, Iron Peg, Mangaweka and Hikurangi, to McKinnon Hut. The others returned to the cars and headed for Kawhatau Base, arriving about 4 pm. We soon had hot water on, the ‘coal-fire range’ going and hot drinks and nibbles set up, after a surprisingly good day.

The two of us headed on up the spur, which was not as steep as the climb to Purity Hut. There was no wind, good visibility but dark clouds about. Then we got to the first high points: Wooden Peg, then Iron Peg. Here we checked out possible routes to Waterfall Hut via Iron Peg Stream. We also had good views of Waipawa Saddle and could see the Wakararas.

There were quite large remnants of the winter snow around. We got some melt water from a section of snow, then headed onwards towards the Mangaweka high point. The trig is now just a heap of wood.

One bird flew quickly overhead and perched on a rock and observed us. Perhaps it was a falcon. In the distance, we could see Hikurangi.

From Hikurangi, we looked at the next spur, hoping to see McKinnon Hut but without success. When we descended from Hikurangi, we got off the track and had to go through big clumps of tussock with plenty of Spaniard. Off in the distance, we could see the next high point on top of which was just discernable: the sign to McKinnon.

We made rather slow progress to the next high point with the sign now getting more obvious. A few spots of rain kept us moving. At the high point, the sign said McKinnon Hut 20 mins (although it took us 30).

Shortly the hut came into view and, after a short steep section, we reached it at about 6 pm. The trip had taken six and a half hours from the road end. It was a relief to get there, because we were getting tired.

First thing next morning, we could see much of Ruapehu and most of the ranges were clear except for the tops. We headed off at 7 .50am. At the high point by the sign, the visibility had reduced to perhaps 50 metres. There was a cool breeze, so it was on with the parka, hat and gloves. The track was clearly defined by regular waratahs.

We went past a large tarn, dropping steadily through tussock lands and went past another track leading to Crow Hut.

After we had been in the bush for a while, we met the others on their way up to McKinnon. John Gray agreed to come come back with us. As we went lower, the rain seemed to increase and the descent got steeper. Finally we got to the trolley on wire across the Kawhatau River. We got across OK, with a fair bit of elbow grease required to get up the last 10 metres or so. Back at the base, the mission was to heat the water to have a clean up before the others got back.

John takes up the story… 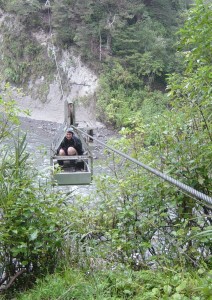 The main party had left base at about 8am, having decided to climb up to the tops and hopefully McKinnon Hut. Everyone managed the ‘cage cableway’ crossing of the Kawhatau River and then climbed slowly up the steep ridge towards the tops. We met Julia and Geoff at about 10am, by which time light rain had started. We were being sheltered by the beautiful native bush around us but found how wet and windy it really was when we left the bush cover and made our way along the tops in tussock country, until the turn-off to Crow Hut. It was here that the decision was made to return to base – and dry clothes. We arrived back at Kawhatau at about 2pm and enjoyed hot drinks and a good wash in hot water, heated by the ‘range’ fire. As usual, a lot of stories of past trips were told.

Sunday dawned overcast but otherwise fine and we decided to walk into Kelly Knight Hut, to ‘bag another hut’. So lunches were prepared and everyone was ready to go by 8am. We had a short drive to the end of Mangakokeke Road, but could not obtain permission to walk through the farm to the forest park, because the farmer was away. Curses! So it was back to our base, to make the next decision. But the wet weather had closed in, so we decided to clean up the house and head for home a day earlier than planned.

The DoC keys were returned to Mangaweka and we had the compulsory shopping and coffee stops in Utiku and Taihape. Our drive home over the “Gentle Annie” was pleasant, thanks to good weather and very little traffic and we arrived home about 2pm. Despite the poor conditions, we’d enjoyed a good weekend and fine company.

Aranga Hut On Saturday 14 January the tramp was changed to a loop in the Northern Ruahine Range. … END_OF_DOCUMENT_TOKEN_TO_BE_REPLACED

Aranga Hut On Saturday 14 January the tramp was changed to a loop in the Northern Ruahine Range. … END_OF_DOCUMENT_TOKEN_TO_BE_REPLACED