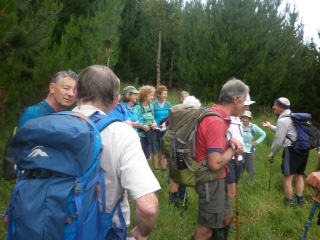 One, two, three… no, missed one, start again… 10, 11, 12… was that a double count? Not sure, start again: 21, 22, 23, 24, 25. That’s the number, must be right. All accounted for. That’s how it was for part of the trip as we followed the leader through the pine forest – 25 trampers in total with four others waiting at Trellinoe, having opted to wander the gardens rather than do the physical stuff. 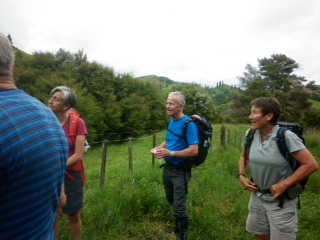 The weather was good and, with little rain in recent weeks, the track was excellent. Thanks to Dennis Mitchell, we were able to walk over land previously owned by Dennis and his brother, and land farmed by his cousin Rob and the owners of Trellinoe.

We left the vehicles at Eland and set off up the road. Alongside a shearing shed was the back half of a feral bull that had been shot recently (never did find out where the front half went, but presumed it was going to dog tucker the same as the back half). Apparently, because the land is no longer farmed, feral animals are coming up out of the stream and into the forest. This one was beyond controlling. 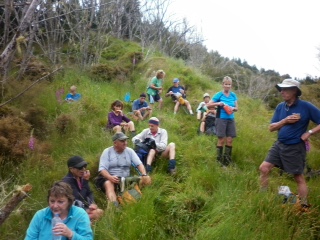 We crossed farmland, went into the forest and eventually entered the Otakowhai Stream. In times gone by, the stream valley was grazed by cattle and they kept the flat areas clear. Today it is overgrown and walking in the stream is the only option in several areas. Time to get wet feet (and for one female member of the group, a wet butt). We went downstream for about an hour until Dennis signalled that we were at the exit point; so there was a steep climb out, emerging in a Trellinoe paddock.

At a high point, we had good views of the Kaiwaka Stream valley and the route of the Old Taupo Coach Road. This was the original route to Taupo – Missionary William Colenso records in his diary spending a night on the Kaiwaka on his way to the interior in 1846; it was gradually improved for horses and drays as the country was opened up and the first coach all the way through to Taupo passed through in 1871. 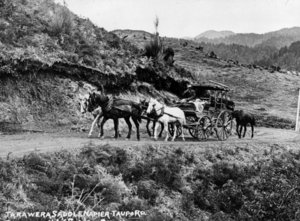 Coach and horses near Tarawera

From there, we crossed several paddocks to arrive at the Coach Road. A steep slog up the road brought us to the Trellinoe Gardens and the café. The café is not operational but we were allowed to use the loos, and an honesty box system of $10 allowed us to view the gardens. The van drivers were transported back to Eland and returned for their passengers.