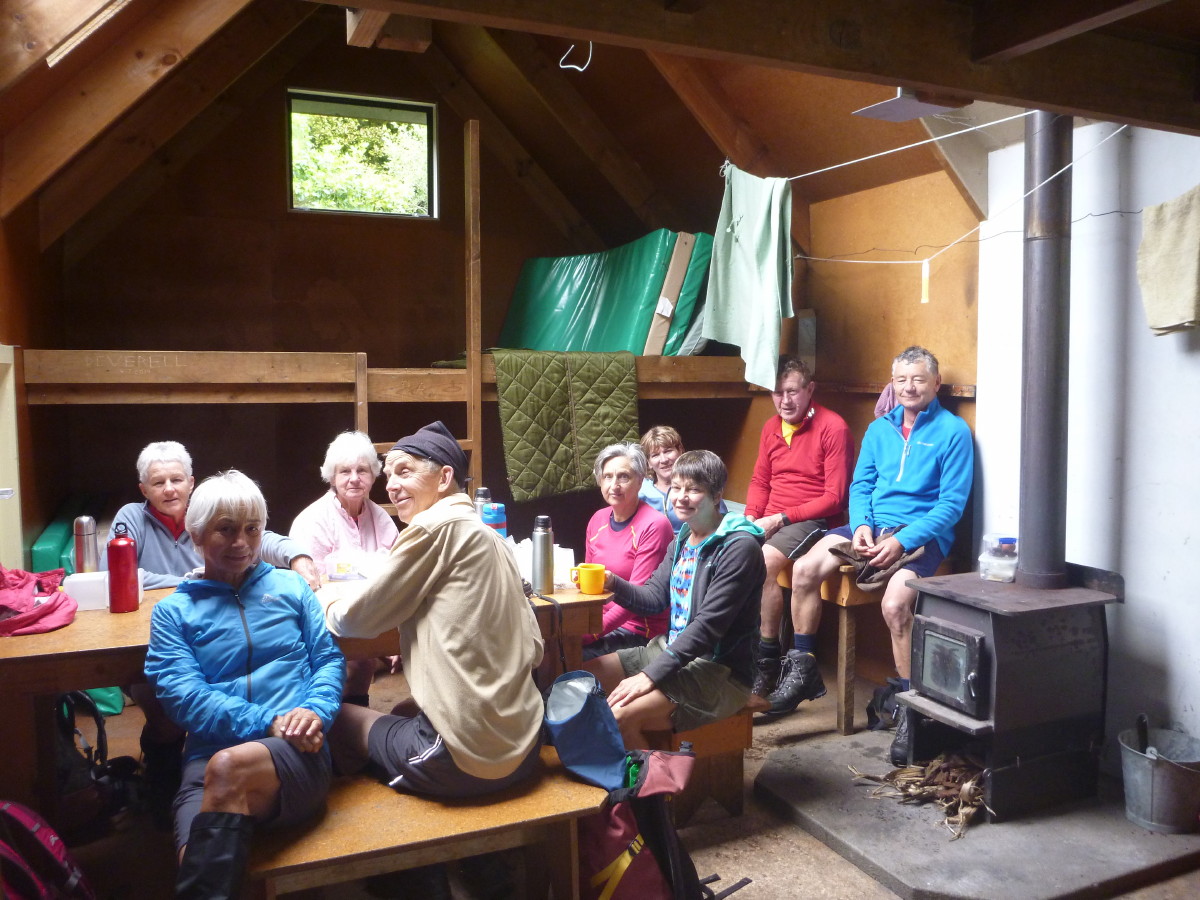 The day dawned bright and sunny on Guy Fawkes Day in Napier. The forecast, however, was for overcast skies and scattered rain in the ranges, and that turned out to be spot-on.

Eleven intrepid trampers set off in the van. The Kashmir Road potholes haven’t improved but fortunately there was no oncoming traffic for newbie driver Juliet, who hadn’t driven that narrow track before. We arrived safely at the car park and the immediate climb up the hill was warming; the wind at the car park had been somewhat frigid. 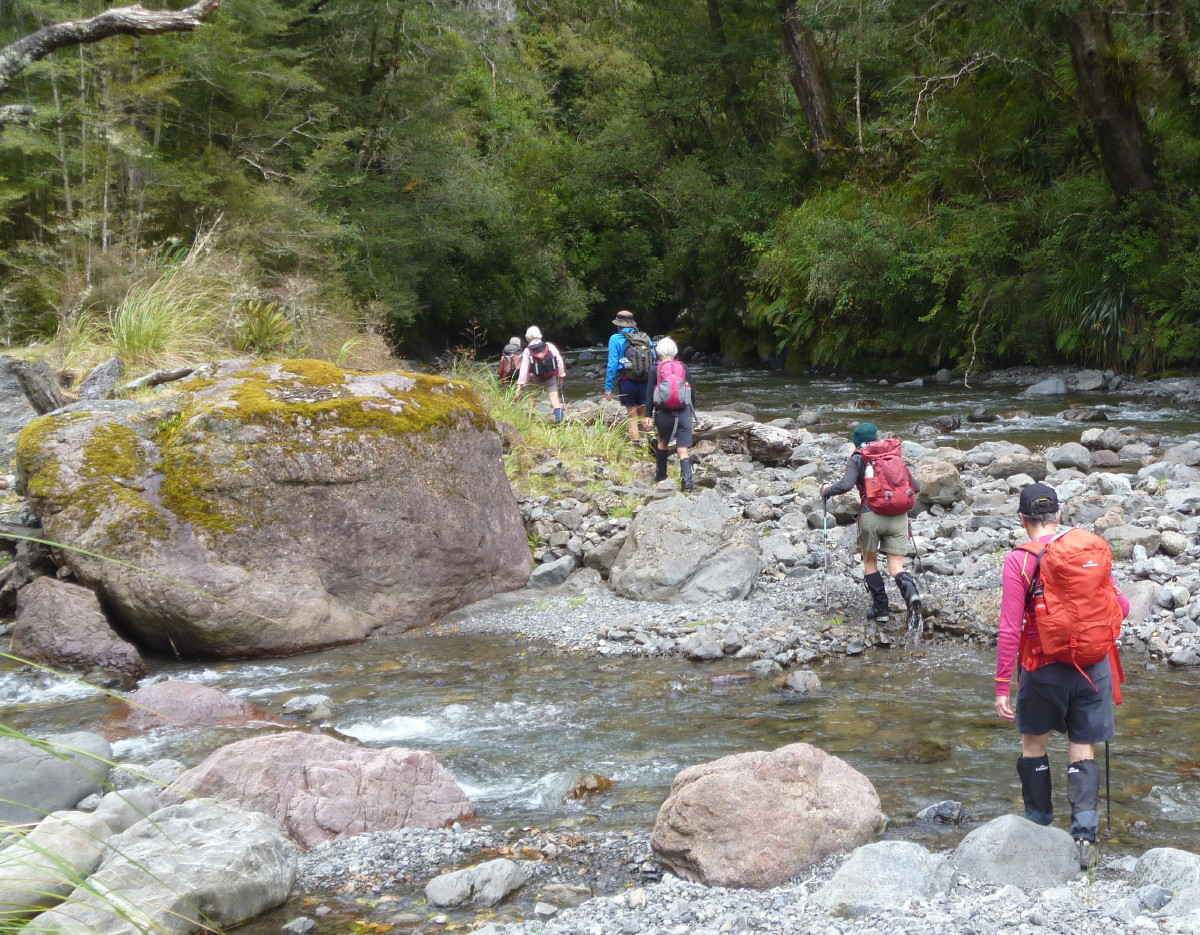 Up the Tukituki River

The track was a series of ups and downs from there. Fortunately, some trampers were keeping a better eye out than others and alerted us to the hooded orchids growing on the track (which we managed to avoid stepping on). But Marie was so keen on taking a photo that she managed to leave her sunglasses behind.

In spite of a bit of windfall from the winter storm, there wasn’t anything major that couldn’t be negotiated. We also spotted some flowering native clematis which was quite beautiful. We carried on at a good rate until we reached the Tukituki River. At that point, two of the group elected not to get their feet wet and had lunch by the river instead of travelling on to the hut. The rest of us trudged through the river, with vertically challenged members struggling to keep their shorts dry. The river crossings were safely handled, in spite of the slippery conditions. 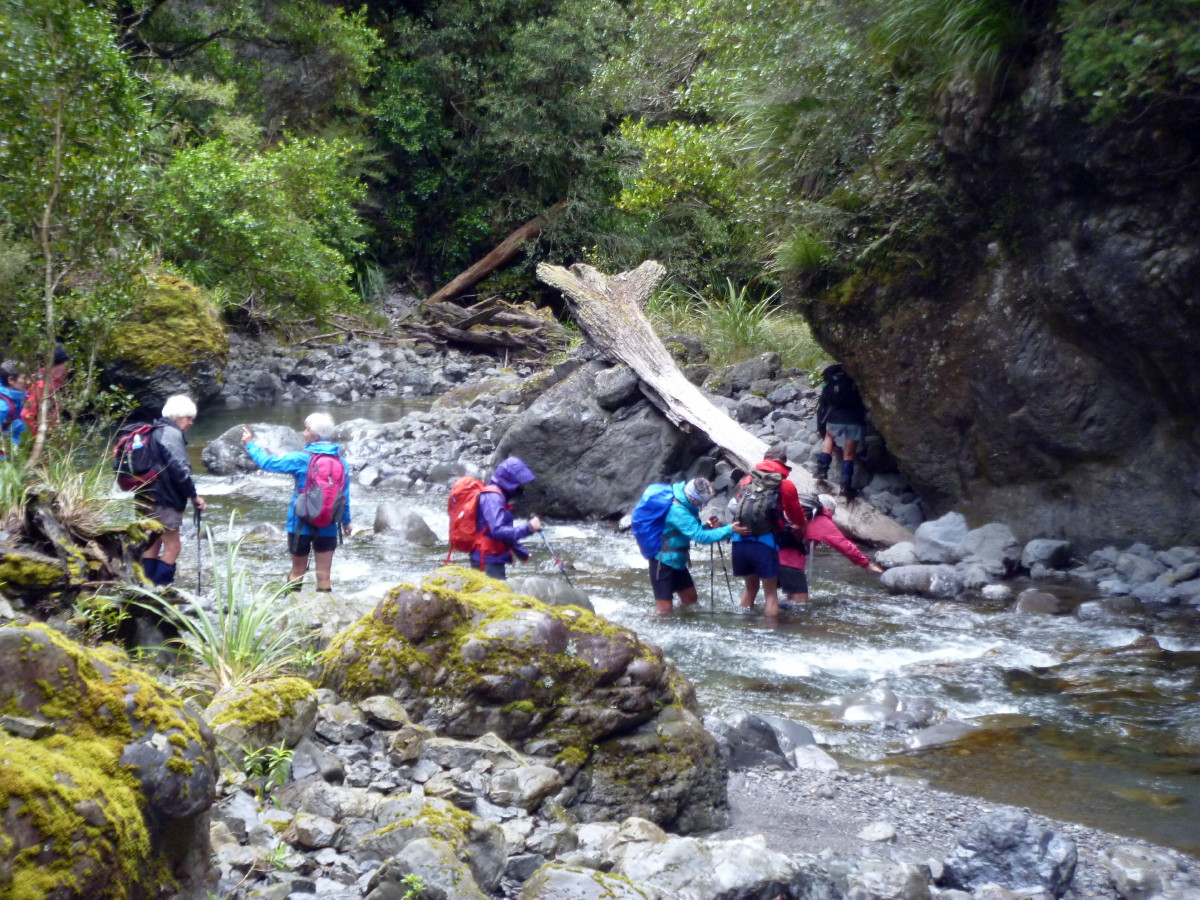 And down the Tukituki River

All were pleased to get to the hut safely and have lunch. While there, the rain settled in a bit more but not too significant. The hut is very close to the river and would make a lovely place to be on a sunny Hawke’s Bay day. As always, the trip out via the river seemed quicker than going in and we caught up with the two other trampers about halfway back to the van. Even the missing sunglasses were relocated – one of the bonuses of retracing the route out.

It was an uneventful trip back, with the weather improving all the way. We got to the van in warmer conditions than when we left and eventually arrived back in Napier in the late afternoon, after a very pleasant day out in the hills.

Aranga Hut On Saturday 14 January the tramp was changed to a loop in the Northern Ruahine Range. … END_OF_DOCUMENT_TOKEN_TO_BE_REPLACED

Aranga Hut On Saturday 14 January the tramp was changed to a loop in the Northern Ruahine Range. … END_OF_DOCUMENT_TOKEN_TO_BE_REPLACED