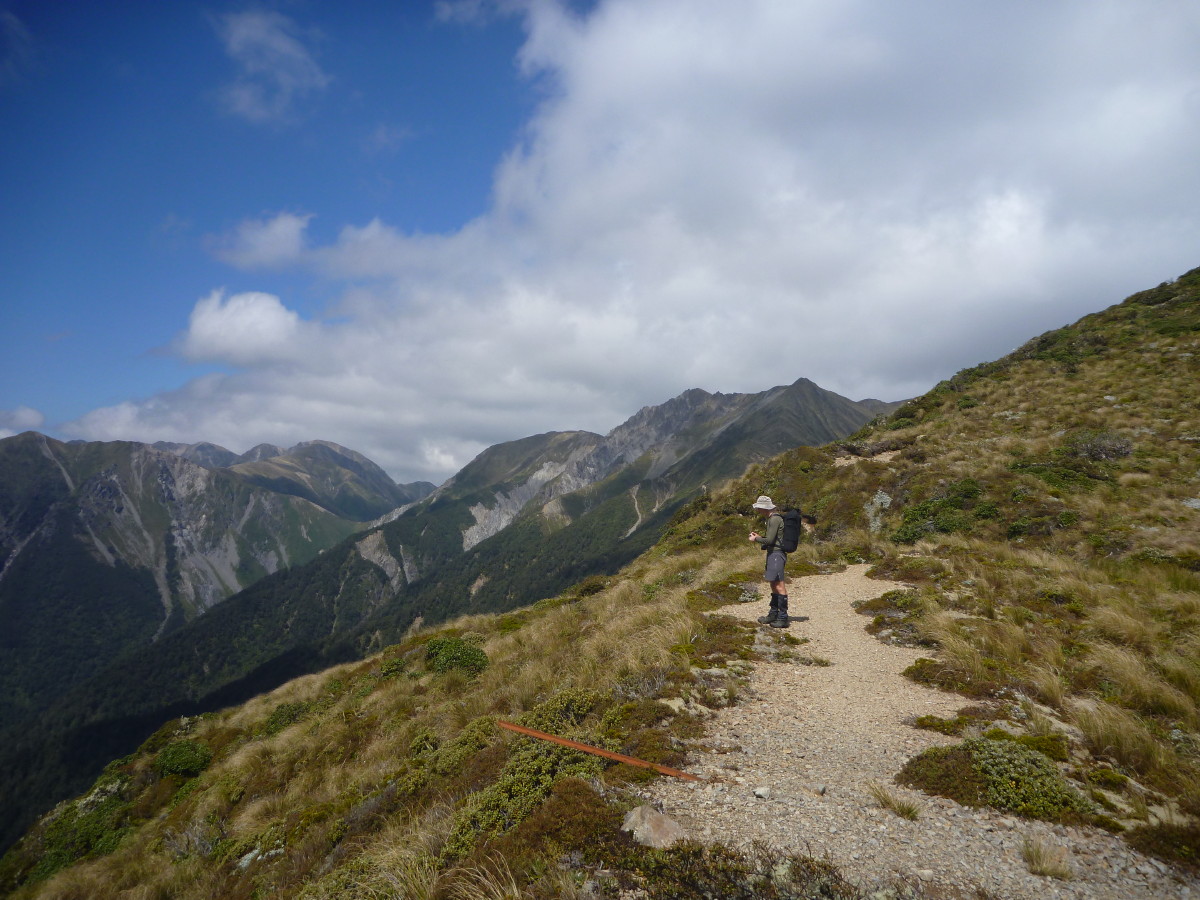 It was a still day and hot work on the climb up to Sunrise Hut. We could see thunder clouds gathering to the east. As often happens, we met some people coming down the track. There was a short break at Sunrise Hut before continuing on. Going across Armstrong Saddle and up to the turn-off to Top Maropea Hut, we had good views all around. However, cloud obscured Ruapehu. 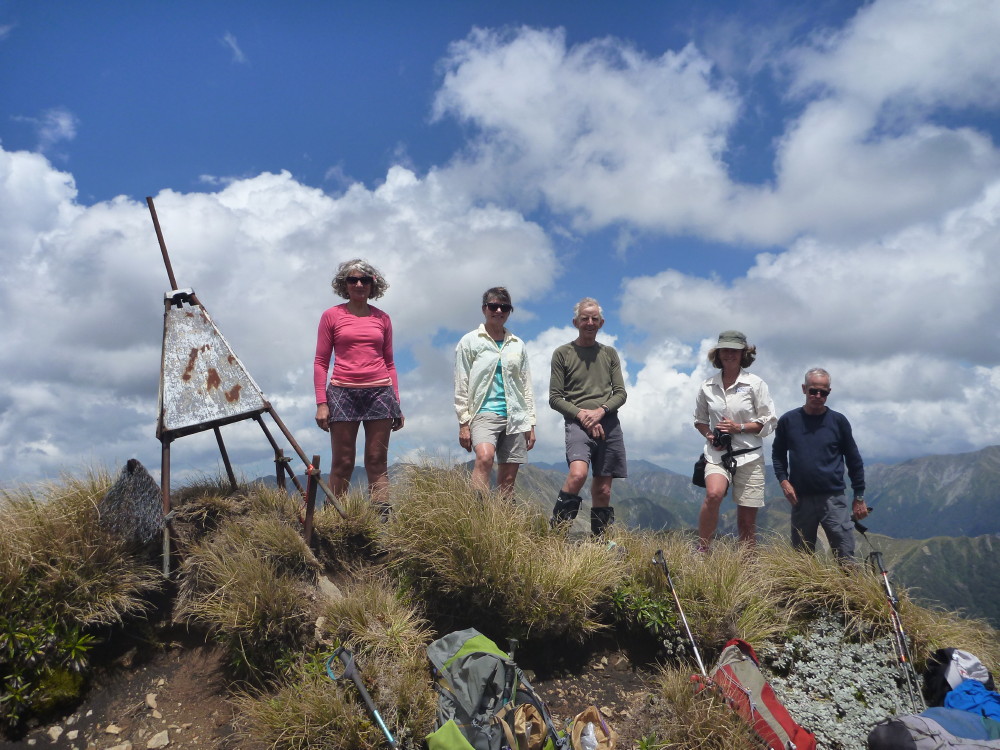 We headed down to the saddle above the North arm of the Waipawa River and then started climbing into a wider area where the track is less obvious. Progress here was helped by track markers put in by Julia’s brother, Roel. After that, there was a steep climb to the first high point where we took a quick break to recover.

We walked several hundred metres along the top to the trig, stopping for lunch. A glider flew by, quite close. It did a spiralling climb, using the thermals to gain altitude. We then headed down some shingle, across a rocky area and down a mild shingle slide. Ali gave assistance to those who were uncomfortable on the slippy bits. 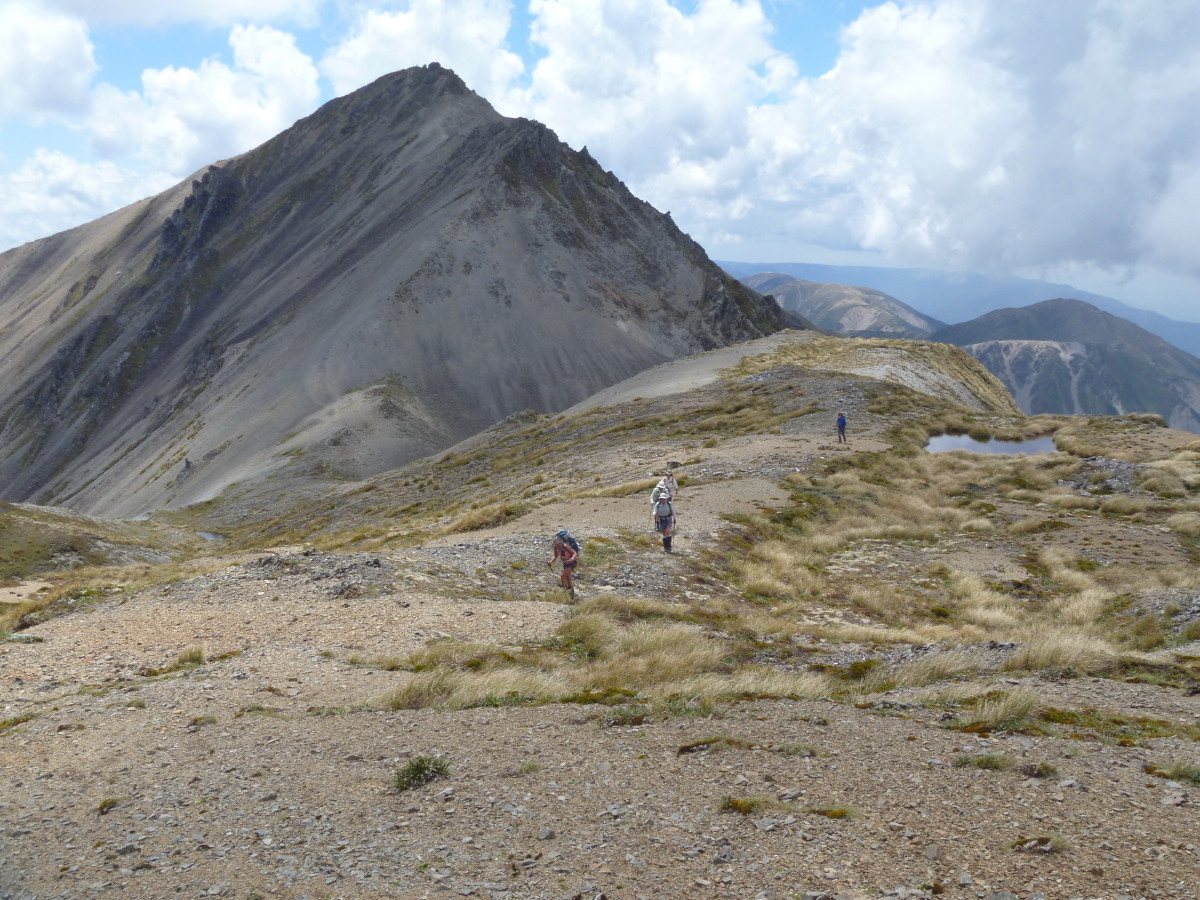 Passing the tarns, Te Atuaoparapara in the background.

We carried on down, past a couple of small tarns, and climbed to a small spur heading south, across to a metal box on a stake. We were supposed to go as far south as possible along the spur to pick up the spur leading to Waipawa Saddle. Unfortunately, we dropped off too soon and had to angle across to pick up the correct spur and track. 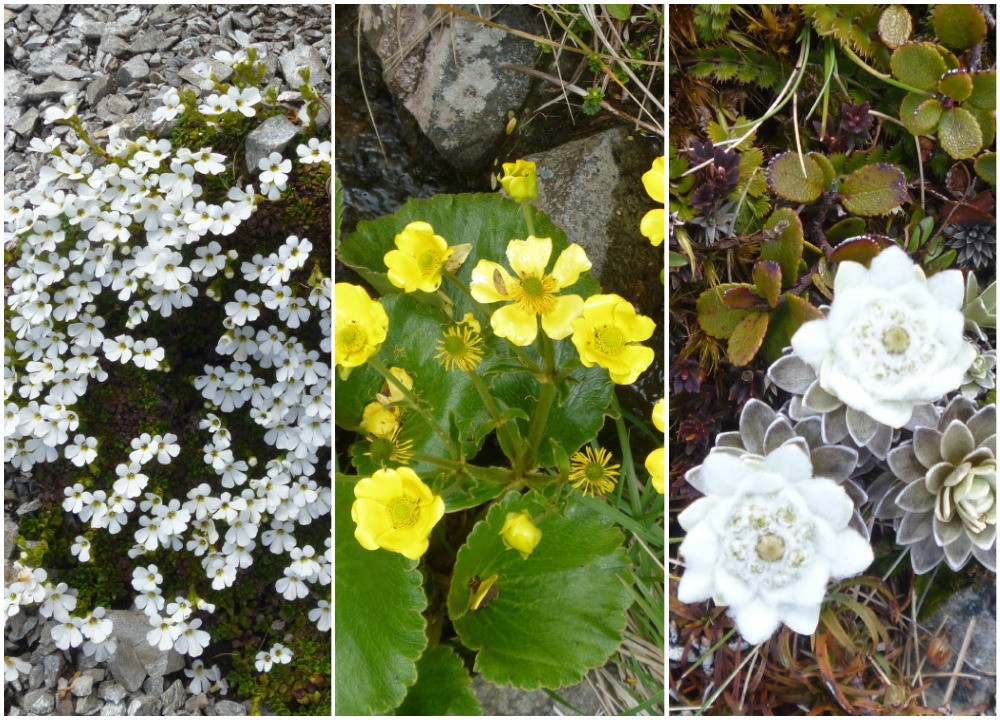 Some of the flora we saw during the day tramp

Once in position, we aimed for the Waipawa Saddle for a drink stop and continued down through the leatherwood and Spaniards. Someone quite rightly yelled when they grabbed a Spaniard by accident.

We went down a short shingle slide to where the main river valley starts. A lot of shingle has been pushed further down the river. The previous year’s track was not always obvious. Part-way down the river, it started spitting with rain – but not enough to warrant putting parkas on. We headed past the North arm of the Waipawa River.

We’d had enough of the river, so took the track up to join the Sunrise Track. At the junction, a seat is dedicated to a tramper. Back down the main track past Triplex Hut, we arrived at the car park and the van at about 5.45pm. It had been a longer day than anyone expected.

Sue and Jude were patiently waiting for us. Apparently, they got drenched just before they got back to the van. Thanks for their patience in waiting for us and for Juliet and Sue driving the van. A great trip – and we were tired at the end of it.

Aranga Hut On Saturday 14 January the tramp was changed to a loop in the Northern Ruahine Range. … END_OF_DOCUMENT_TOKEN_TO_BE_REPLACED

Aranga Hut On Saturday 14 January the tramp was changed to a loop in the Northern Ruahine Range. … END_OF_DOCUMENT_TOKEN_TO_BE_REPLACED