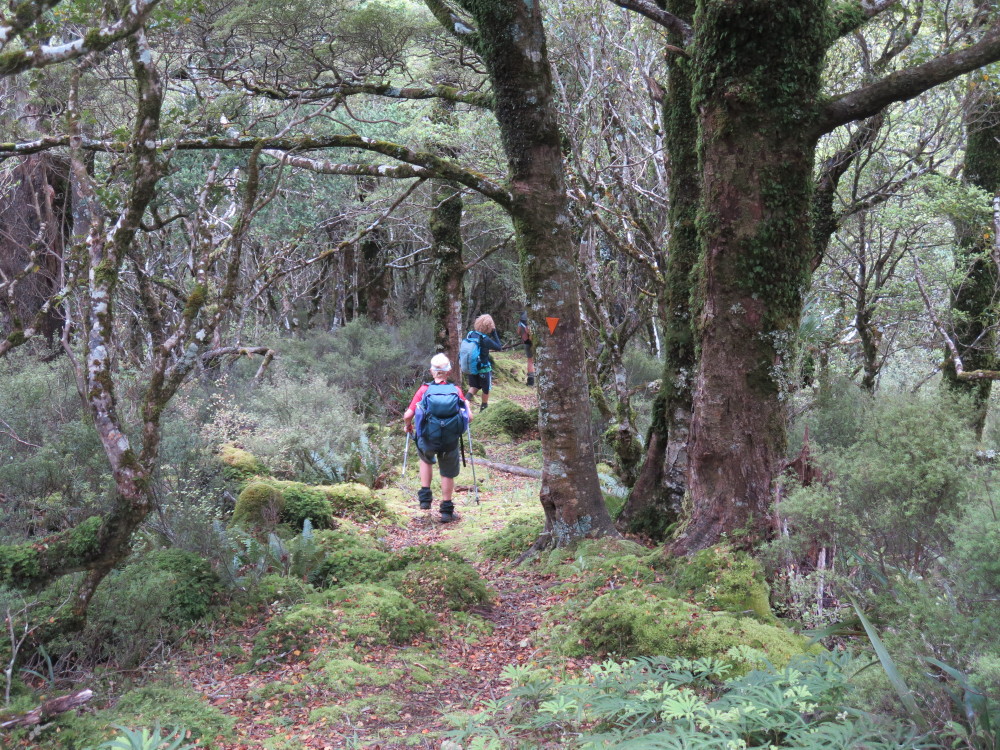 “Welcome to Norsewood”, said Sue Trotter as she stepped into the van. An icy blast followed her in. She proceeded to give us a local weather report. “For the past five days, it’s been thunderstorms in the afternoon and torrential rain at night. The night before last, three inches in three hours. Never seen the streams so high. Way behind with the silage-making.”

Our planned adventure was to walk the Apiti Track from Ngamoko Road and return via the Mangatewainui Stream. Sue was optimistic that the stream would have sufficiently dropped for us to complete the circuit. 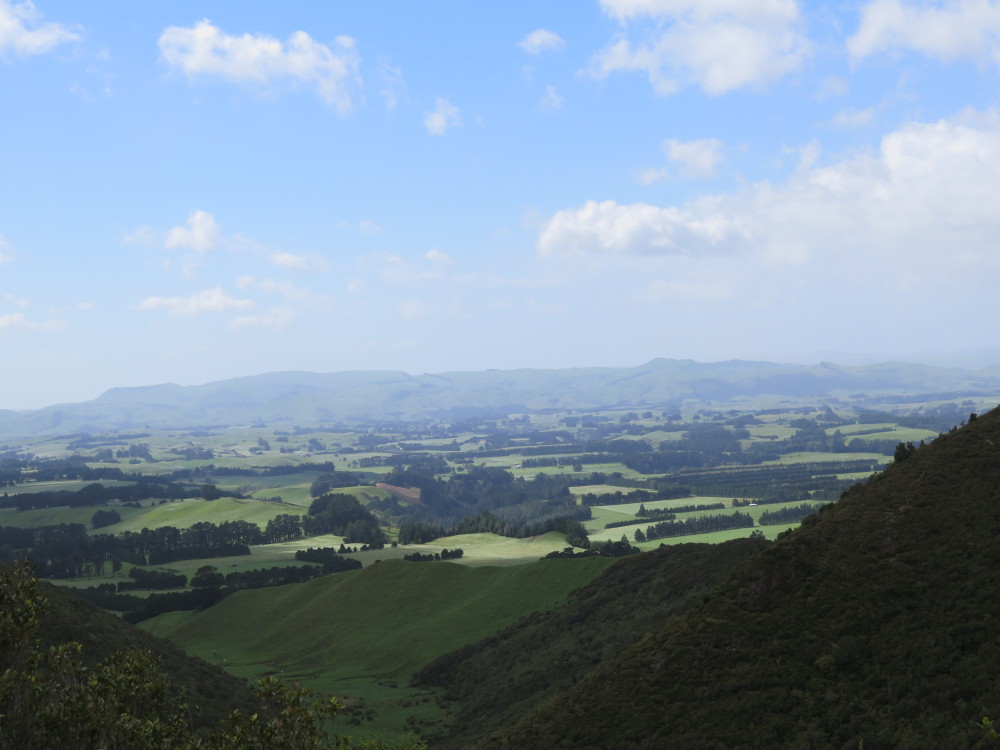 Views of farmland in the southern Hawke’s Bay

The Apiti Track was cut by the US Army in World War II with the intention of providing access over the Ruahine divide to Manawatu. It’s a pleasant, easy gradient at first, but the ‘easiness’ abruptly ends after a couple of kilometres and the track reverts to a typical bush track with windfall, washout detours and mud. Ted wanted a shorter walk, so he turned back after about 1½ hours and would drive the van to pick us up on private property after our return stream walk. (Later, Geoff also turned back to join Ted.)

We stopped for lunch after three hours, at the turn-off to the river – still 1 km away and with a 350-metre descent. We suspected, without seeing the river, that it was probably running high. We had crossed many mini-streams in the gullies, with water flowing where normally there would be none at all. Nobody wanted to walk down to verify the safety of the river, only to climb back up, on top of an already longish tramp. With slight disappointment, we decided to go back the way we came.

The Norsewood weather pattern of afternoon thunderstorms was repeating itself. The temperature, already low, dropped even further. Layers went on. Then the “flecks” started. Flecks is a Norsewoodian expression for small raindrops about to become big raindrops. And then big raindrops became lots of big raindrops. Actually, the flecks turned into hail. I loved that tap-tap-tap noise on my raincoat lid, and seeing the bouncing icelets. Dark clouds chased us down the track and the rain came with a very strong wind. Marie was worried a tree might fall on us. 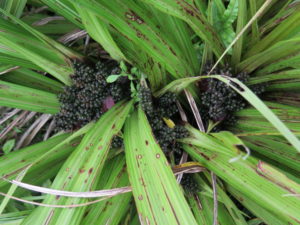 As we attempted to outrun the storm, we came to a very exposed saddle at about the halfway point. Alison was in the lead. Her pack cover was flapping and billowing like a tangled parachute. I was fearful that, being of light stature, she might become airborne and be taken into orbit. She managed to remain anchored, but only because the pack cover released itself. It became a 100mph projectile disappearing over the ridge. I thought this was very funny (it reminded me of Rosemary on a tramp to Longview. Her pack cover was later found in Chile).

We rounded the corner and could see Alison’s orange cover caught some distance away, high in a tree. Marie made a valiant effort to bush-bash her way in to retrieve. We called her back, concerned she might lose voice contact and get lost.

The rain had eased, but the rumble of thunder followed us. We telephoned Geoff back at the van to hold his horses and stay put because he, Ted and Vic were to have driven around to the planned stream pickup point. This is the first time, to my knowledge, that a cellphone has been used for any practical purpose by the club on a tramp. 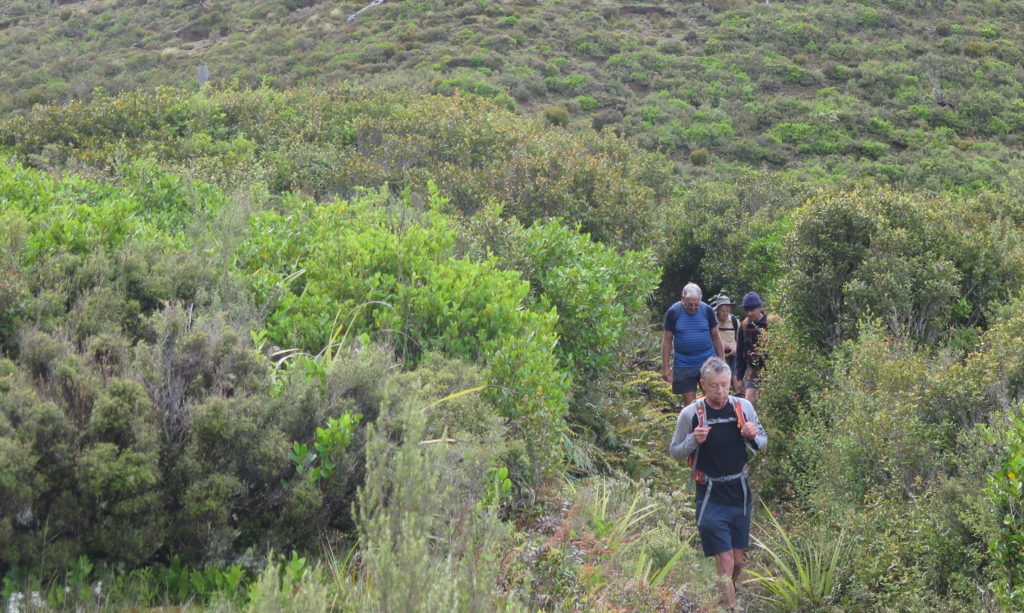 The exposed section of the Apiti Track

We arrived to be greeted by Rambo, disguised as Ted, sporting a bloodied bandage, bloody knees and a right arm not in top condition. It was as though he had been single-handedly fighting the world to save us all. He said it was just an argument with a rock he had head-butted, during a nasty fall. Ted’s resilience and resourcefulness were impressive. Despite not being able to see because the inside of his glasses were covered in blood, he cleaned himself up, fashioned a triangle bandage plus gauze from his first-aid kit and patched the wounds to a standard that any of the several nurses we have in the club would have been proud of, then made his way on to the van.

The hired van was an odd vehicle. It had no gear stick, only buttons to push. I thought it must be a new-fangled thing but apparently it was quite old. Anyway, it wouldn’t start, and merely made a complaining sort of whirring noise when Alison turned the start key. It finally started after someone suggested we made sure all the doors were properly closed.

We dropped Sue back home at Norsewood and left a battered Ted in Taradale. Thank you to Marie for organising a good day out and to Alison for driving the van.

Aranga Hut On Saturday 14 January the tramp was changed to a loop in the Northern Ruahine Range. … END_OF_DOCUMENT_TOKEN_TO_BE_REPLACED

Aranga Hut On Saturday 14 January the tramp was changed to a loop in the Northern Ruahine Range. … END_OF_DOCUMENT_TOKEN_TO_BE_REPLACED