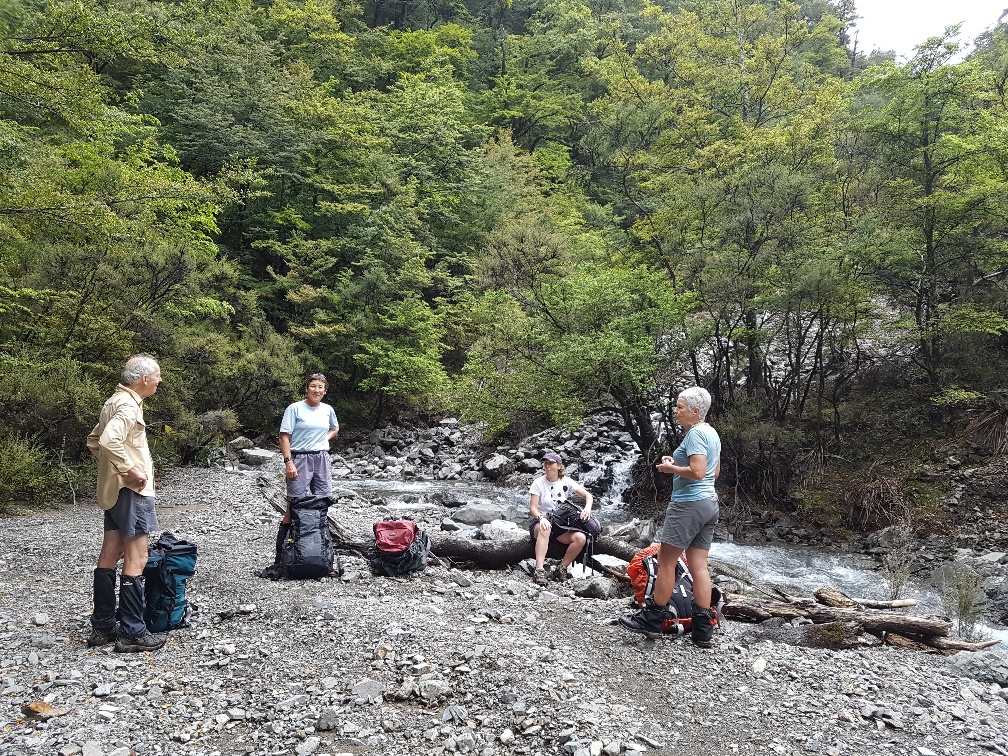 The designated tramp was Back Ridge Hut, but to get there we needed to get up to Kaweka J first and – with the forecast wind – we could see that might be an issue. So the decision was made to change to the Lakes car park area off the Napier-Taihape road.

Five of us set off in two cars with a sightly later start than planned because of traffic delays caused by the Iron-Maori marathon, which was on at the same time we wanted to leave.

Eventually we got to the lakes and found that the weather wasn’t too bad. We decided that, as we had two vehicles available to do the circuit from Lakes car park, we could tramp around the track to meet MacIntosh Spur track, then to MacIntosh Hut for lunch. From there it was across the Plateau , then back down the river valley to cross the Tutaekuri River, then back up the valley to pile into the other car and drive the last boring couple of kilometres back to where it had all started.

At the beginning, crossing the Tutaekuri River some chose to remove boots to keep feet dry (on other occasions, we have found that just the first crossing was the one that gave us the wet feet). However, this time there had been so much rain in the area that it just wasn’t worth the hassle of removing footwear.

So after the second stream crossing, we all had wet feet for the rest of the trip. The track was in good condition, although a bit slippery in the steeper sections, as expected. There were no dramas and we had a lovely relaxed lunch at the hut at midday. 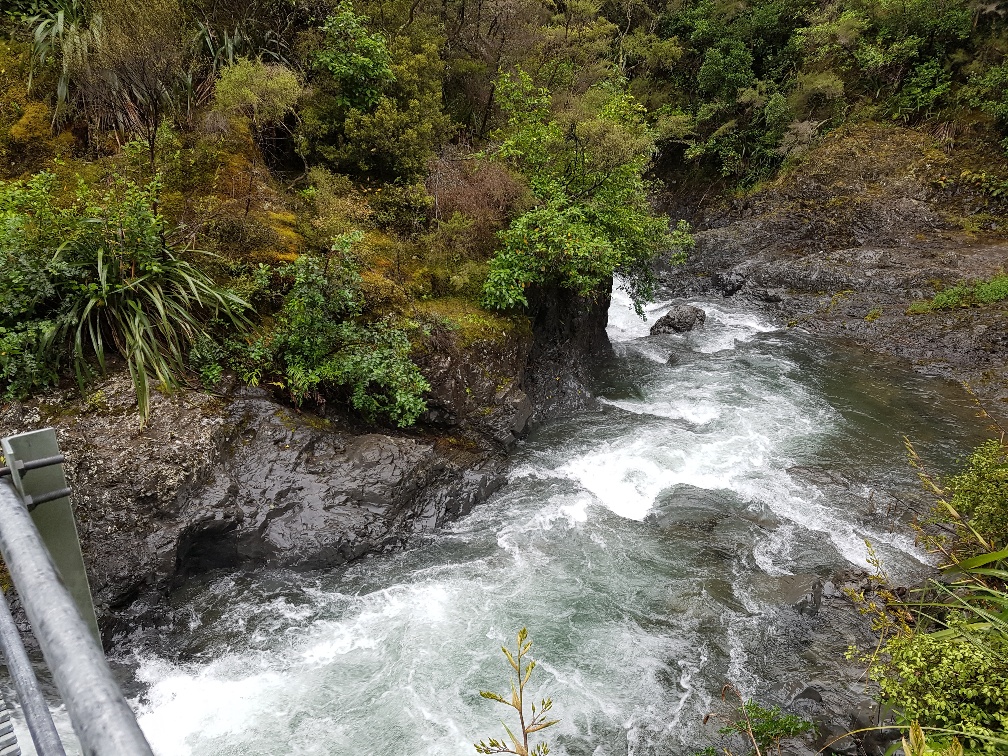 The bridge crossing the Tutaekuri River and gorge downstream

From there it was a relatively easier walk across, down and up again and we managed to get back to the Lakes car park in good time, arriving back in Napier by 3.30 pm. The rain which had been threatening for the last hour decided to start for real as we were climbing out of the valley. As it was quite warm, most of us didn’t bother to put on rain jackets.

It turns out that this tramp must give good protection from easterly winds because, back in Napier, we were told it had been very blustery indeed! The change of destination worked well for us.

Sparrowhawk bivvy, Ruahine Forest Park, Saturday 6 August 2022 Banner Photo: The view east, towards the Wakararas and beyond On a beautiful … END_OF_DOCUMENT_TOKEN_TO_BE_REPLACED

Prologue: The author was on the Whirinaki tramp, reported on this website under the headline 'We observe a mock turtle and the rodent of Upper Te … END_OF_DOCUMENT_TOKEN_TO_BE_REPLACED

Ruahine User Group A meeting was held on Monday 25 July, in the NZDA rooms in Dannevirke.  Julia … END_OF_DOCUMENT_TOKEN_TO_BE_REPLACED

Ruahine User Group A meeting was held on Monday 25 July, in the NZDA rooms in Dannevirke.  Julia … END_OF_DOCUMENT_TOKEN_TO_BE_REPLACED

Ruahine User Group A meeting was held on Monday 25 July, in the NZDA rooms in Dannevirke.  Julia … END_OF_DOCUMENT_TOKEN_TO_BE_REPLACED

Ruahine User Group A meeting was held on Monday 25 July, in the NZDA rooms in Dannevirke.  Julia … END_OF_DOCUMENT_TOKEN_TO_BE_REPLACED