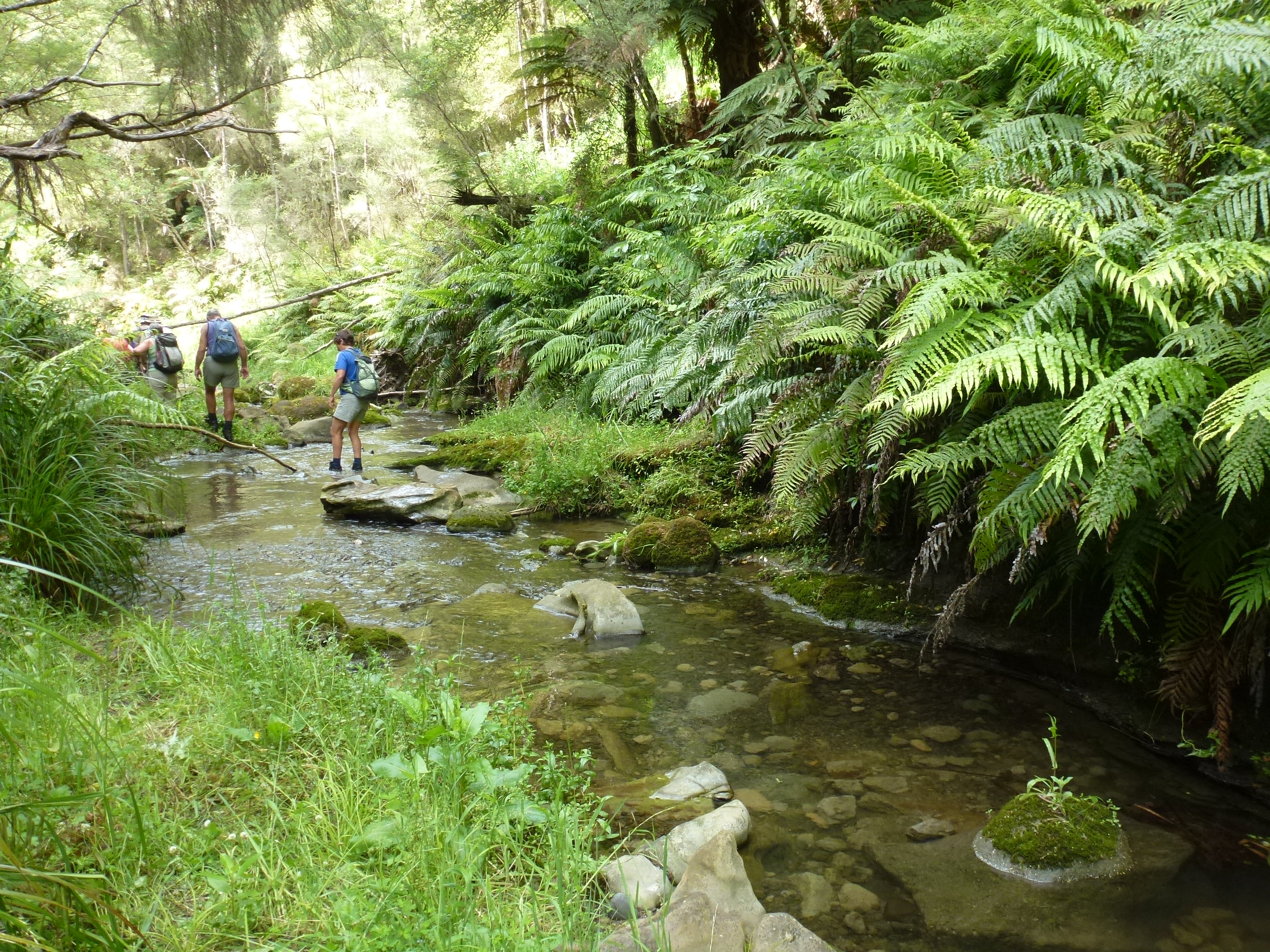 A good crew of 20 turned out for this, our last Wednesday outing for the year. The plan for the day was for a tramp at Eland Station and an end-of-year break-up lunch at Snapper Park on the way home. That’s a good enough reason for the turn-out but we were also to have a ”new to us” tramp. That’s two good reasons and what’s more it was beautiful weather. It was a through tramp so the transport arrangements needed some clever logistics, which I was pleased to leave to others.
We were to cross Eland Station and then follow the Otakowai Stream down to the Esk River. Eland Station, on the Napier-Taupo Road, has been in the Mitchell family’s hands for some generations and Dennis was to be our host and guide. All my life I have travelled past the gates to Eland Station and never knew what was behind the big grove of trees that guarded the entrance. All was to be revealed. 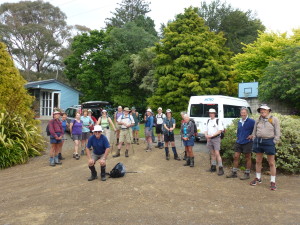 Dennis led us across what is now a large dairy farm with wide visas across to Te Waka and the Maungaharuru Range. Many mature trees dot the rolling hills. The Otakowai Stream was ahead in a deep gully of mainly manuka/kanuka scrub. After guiding us to the stream, Dennis left us to wend our way down. 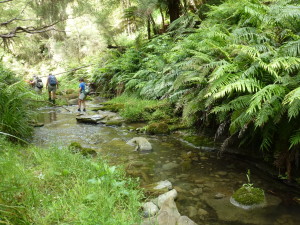 It was easy going with many crossings of the ankle-deep water and some sections of straight down the middle. We didn’t see a great variety of vegetation but the eagle-eyed amongst us found two clumps of Jovellana, a first for me. After many twists and turns, the valley opened out a little and we left our stream and for a short distance followed the Kaiwaka Stream where Dennis was waiting to accompany us over the last short section up the Esk River to the Ellis Wallace Road road-end where our two vans were awaiting us.

We didn’t need Dennis for navigation but were glad that he would lead us through the electric fences (despite his assurance that they were turned off).

The original coach route from Napier to Taupo followed the Esk and Kaiwaka Rivers, so we were retracing some history.
It had taken us four hours including a good break along the way, so we made it to Snapper Park for a late lunch. That was a fine way to end our year, something new and something social.
Thank you Dennis. It was a great day.

Mackintosh Hut/Rogue Ridge, Kaweka FP, Saturday 17 September 2022 Banner Photo: The leaning sign at the top of Mackintosh Spur It was a sunny, … END_OF_DOCUMENT_TOKEN_TO_BE_REPLACED

Shine Falls, Local, Wednesday 7 September 2022 Banner Photo: Group selfie and the falls Nine of us set off on a very frosty morning from Park … END_OF_DOCUMENT_TOKEN_TO_BE_REPLACED

A-Frame to Stanfield Hut, Ruahine FP, Saturday 3 September 2022 Banner Photo: At the A-Frame Hut We had a full vanload booked to do this trip. … END_OF_DOCUMENT_TOKEN_TO_BE_REPLACED