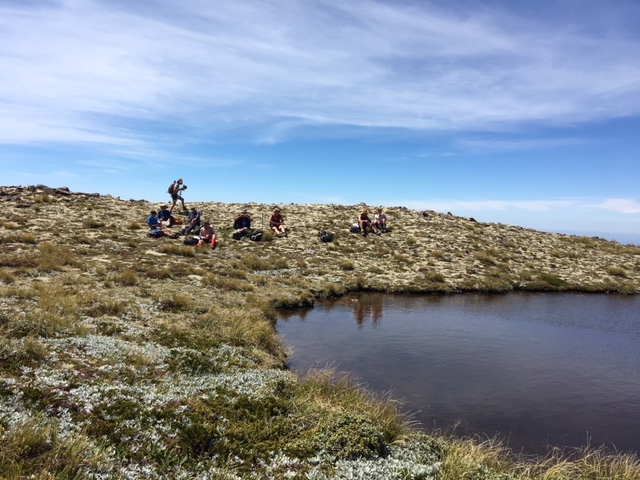 A 7 am start from Church Road saw us depart on a warm clear morning. There were 14 trampers in the van and Alison’s SUV and after a momentary brain fade about direction, it was off to Puketitiri. Once we left the tarmac, we travelled past Whittle’s Farm and as we progressed, things got interesting. Not just the scenery, but the condition of the road to the Makahu car park. The Elvis Presley classic “All Shook Up” came to mind as we dodged the worst of the ruts and pot-holes.

By a little after 8.30, we were under way, with older members electing to go along the track towards Kaweka Flats Bivvy, while the remaining 11 began the ascent towards Kaweka J-North Kaweka. With a well-graded track, the initial climb was easy enough; we soon made height and were able to enjoy views looking back towards the car park and beyond.

That was about to change as the track narrowed, became less well-defined and we had scree underfoot, which makes traction on the steeper sections more of a challenge. We had two people who had not previously tramped with the club and one had never experienced these conditions. To their credit, they both put in a sterling effort on what was to become a challenging day. 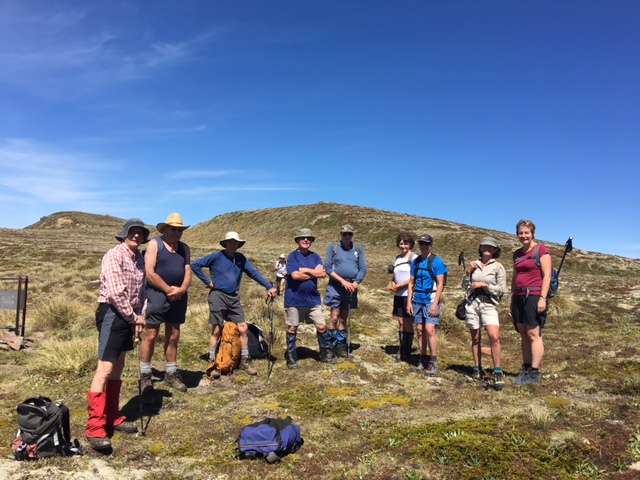 The roundup at the Kaweka North/J junction

While the fitter members took off up the slopes, the old pack-horses Ted and Murray gritted their teeth and stomped their way upwards. We all collected at the junction point between Kaweka J and the route to North Kaweka. To the east, the cloud hovering above Ruapehu cleared and we had a great view of the snow-covered slopes. Ngauruhoe, however, had only remnants of snow in the gullies.

An easy tramp towards North Kaweka followed and we dropped off the ridge to have our lunches by the tarns on the eastern side. The entertaining fiasco of NCC’s handling of a supposed water crisis, the potential improvement in management at the port under a new CEO and the hazards we might face on our descent were among topics covered. Alison, Ted and Sue Marshall were all predicting a challenging time ahead, as the route we were taking was partialy through bush and old snow damage could have left a lot of fallen trees. 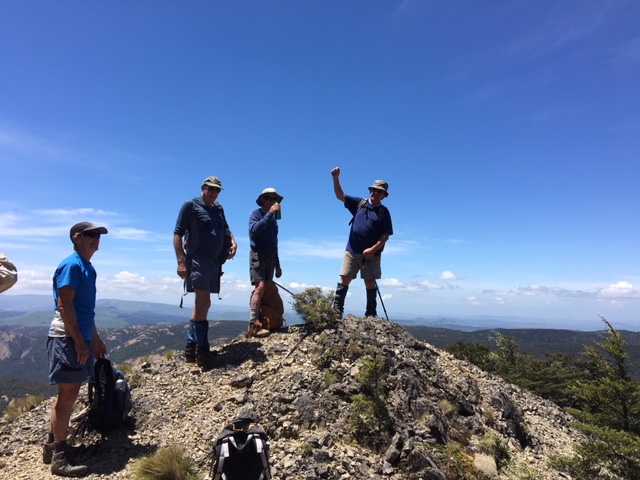 One of the rocky knobs on the way down

After lunch, we started down a very steep ridge with limited vegetation but with steep fall-aways on unstable scree. We met outcrops of rock with scrubby vegetation which obscured where the track actually went. The front person alternated between Kelvin, Alison, Ted and Murray in the main. All of them managed to get it right most (but not all) of the time. Some of the descents really were tough. Keith had unfortunately had his boots come adrift and they were bound together with some of Kelvin’s gaffer tape, which made things much slower for him.

Ted, with his usually reliable memory, kept us pretty well on task and Alison guided us into the bush as we came to a cairn. Now things became very interesting. This track is not being maintained and was overgrown. We managed to stay pretty much on track, with Ted producing his trusty saw to clear the lighter branches.

Our troubles were about to begin when we came to a mass of interwoven fallen trees and debris in a gully where the track seemed to head. It was impassable. We cast about trying to find the track, to no avail. The way ahead was littered with fallen trees, finding a way through became challenging and we had only a general idea of which direction to take. 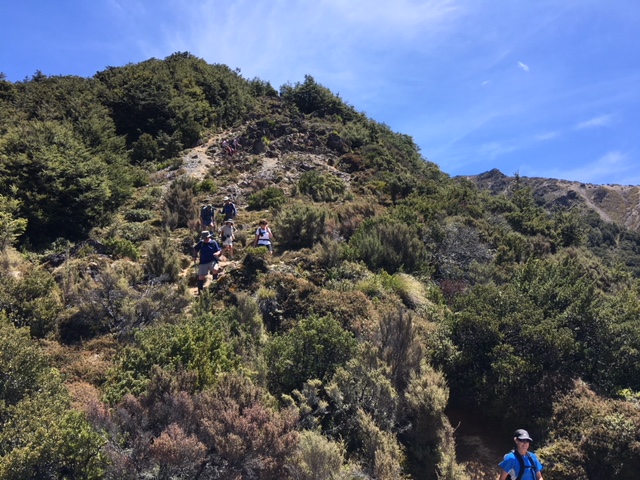 Keeping to the ridgeline meant some steep dropoffs

Alison produced her smartphone with its gizmo map thingy and tried to give us a steer on where we should be going. However, impenetratable tree-falls, gullies and bush lawyer made for a frustrating time. This is where Ted and Murray, with their vast experience of progress by brute force, came to the fore – but not before Ted managed to injure his leg with a branch which struck back.

With Alison calling directions, Ted and Murray kept at it until we encountered the stream which intersects with the track from the car park to the Kaweka Flats Bivvy. We expected this would be straightforward, but the stream bed was also littered with fallen trees and we continued downstream until Alsion’s gizmo told us it was time to head inland. Fallen trees still frustrated us and we seemed to be on an energy sapping mission with no clear end in sight. All we knew was that we would, at some point, intersect with the main track at right angles.

To our great relief, we spotted the sight of a clearer spot which gave us hope the track was in sight, and so it proved. An easy walk back to the car park followed and it was “get changed and off home”.
Thanks to Alison and her gizmo and transport, and to Kelvin for his excellent driving.

Aranga Hut On Saturday 14 January the tramp was changed to a loop in the Northern Ruahine Range. … END_OF_DOCUMENT_TOKEN_TO_BE_REPLACED

Aranga Hut On Saturday 14 January the tramp was changed to a loop in the Northern Ruahine Range. … END_OF_DOCUMENT_TOKEN_TO_BE_REPLACED