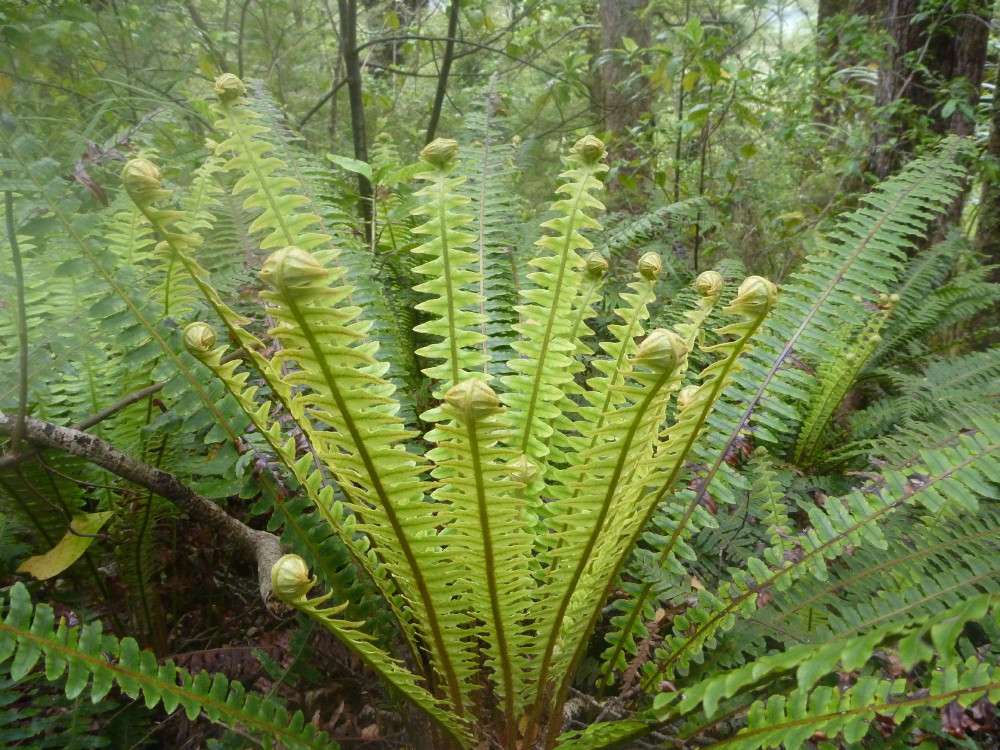 The north arm of the Waipawa River is not an area that I have tramped, so this was on my to-do list. Unfortunately, it still is, due to my own indecision. 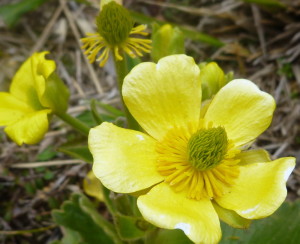 We made it up to Sunrise Hut, and checked out the new toilets which have been repaired due to wind damage a month ago. Looking good. Note that there is no gas fire or gas cooking facility in Sunrise Hut, as this has been taken out. Warmth is provided by a wood burner, and there is plenty of wood for burning in winter time. In fact, a whole shed full of wood.

We continued on around to Armstrong Saddle, and up to the second junction to Top Maropea Hut. Here the way to Te Atuaoparapara (or aka 66), heads south through tussock, and there is a small dip, and a route through some leatherwood. It is here that you head for the scree slip that takes you down into the headwaters of the Waipawa River, known as the north arm. 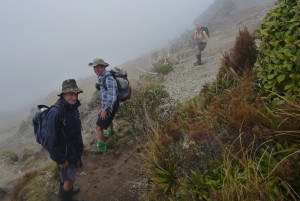 We checked our position with the GPS (702/910) and map. We could not see further than 50m down the scree slope, and this looked like a very rocky start. Thus I stupidly said, sorry – as I can’t see a way forward, I will give this a miss. Geoff, Phil and Les were game and headed down the scree towards the rocks. They were soon lost in the cloud. Yes, they were in the right place, and had a great time, getting down the scree in two minutes. They made their way down the stream, and in places where it was steep, Geoff – who had the longest legs – helped Phil and Les down. There was lots of deer sign, they told me later.

Alison and Marc continued on towards Te Atuaoparapara, before turning back. They wanted to stretch their legs a bit, and not suffer any falls on the scree slope.

The rest of us retraced our steps. The sun emerged briefly, so we stopped for our lunchbreak. The cloud parted for a few minutes and I could see the scree and bottom. We made it back to Sunrise Hut, and had another longer break before heading off downhill.

The others made it down to the confluence, and nearly overshot the track which goes back up to join the Sunrise Hut track. This avoids the river route.

Thus we all returned to the Sunrise Hut car park, Geoff, Phil and Les pleased that they had gone down the scree and north arm. I have resolved to not be such a wuss and just go for it when faced with decisions that really are not that hard.

Sparrowhawk bivvy, Ruahine Forest Park, Saturday 6 August 2022 Banner Photo: The view east, towards the Wakararas and beyond On a beautiful … END_OF_DOCUMENT_TOKEN_TO_BE_REPLACED

Prologue: The author was on the Whirinaki tramp, reported on this website under the headline 'We observe a mock turtle and the rodent of Upper Te … END_OF_DOCUMENT_TOKEN_TO_BE_REPLACED

Ruahine User Group A meeting was held on Monday 25 July, in the NZDA rooms in Dannevirke.  Julia … END_OF_DOCUMENT_TOKEN_TO_BE_REPLACED

Ruahine User Group A meeting was held on Monday 25 July, in the NZDA rooms in Dannevirke.  Julia … END_OF_DOCUMENT_TOKEN_TO_BE_REPLACED

Ruahine User Group A meeting was held on Monday 25 July, in the NZDA rooms in Dannevirke.  Julia … END_OF_DOCUMENT_TOKEN_TO_BE_REPLACED

Ruahine User Group A meeting was held on Monday 25 July, in the NZDA rooms in Dannevirke.  Julia … END_OF_DOCUMENT_TOKEN_TO_BE_REPLACED