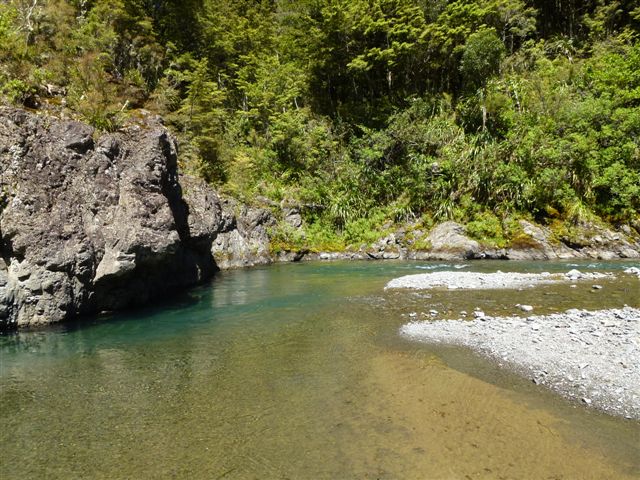 Barlow Hut is up the Makaroro River in the Northern Ruahine Ranges. We left our transport on a farm which is in the area of the proposed Ruataniwha dam and set off across the farmland before dropping down to the river at the Gold Creek confluence. It was a cracker of a day with a cloudless blue sky and little wind. 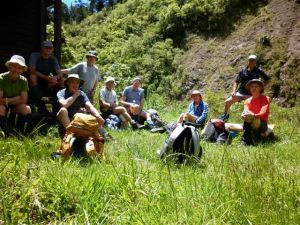 We were a party of ten, all guys (maybe it was Ladies Day at Mitre 10!). At a vanside meeting, we had agreed that the full Colenso Spur/Sparrowhawk circuit was for another day and that most would go to Barlow Hut via Colenso Spur and down Barlows track while some would go to the hut via the river and one independent member chose to avoid the river altogether and go up to the trig on the Gold Creek track. Our timing was perfect so we had nine for lunch at the hut. Nine guys (a mixture of Wednesday and Saturday regulars) made for some interesting banter. 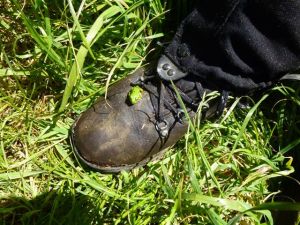 The guest frog on John’s boot

At lunch, John, a guest from our Saturday fraternity, was delighted to have a little green frog perch on his boot as he considered that this was probably some sort of good luck omen for him. I thought it was good luck for the frog because it could just as easily have been under John’s boot.

The river was flowing well and demanded attention, particularly in the upper section where the rocks were bigger and slippier. The water was still a little cold so I was glad my legs weren’t any shorter for some river crossings. The water was perfectly clear and the pools a deep blue. Apart from a few small
sections of slips, dense bush covers the steep hills on both sides of the river. The direct route is never out of the river bed so walking on stones, river crossings and wet feet are the order of the day. The Colenso Spur route is a bit more demanding with a 300-metre climb and then a steep descent back down to the river.

Normally I don’t take many photos in the afternoon, particularly if it is the morning in reverse, but this trip was different. Big, puffy cotton-wool clouds peppered the sky so there were many more “Makaroro River” shots to be taken. The trip home was a bit quiet as the banter had dried up and the crew were perhaps growing weary after a full day in the sun.

Sparrowhawk bivvy, Ruahine Forest Park, Saturday 6 August 2022 Banner Photo: The view east, towards the Wakararas and beyond On a beautiful … END_OF_DOCUMENT_TOKEN_TO_BE_REPLACED

Prologue: The author was on the Whirinaki tramp, reported on this website under the headline 'We observe a mock turtle and the rodent of Upper Te … END_OF_DOCUMENT_TOKEN_TO_BE_REPLACED

Ruahine User Group A meeting was held on Monday 25 July, in the NZDA rooms in Dannevirke.  Julia … END_OF_DOCUMENT_TOKEN_TO_BE_REPLACED

Ruahine User Group A meeting was held on Monday 25 July, in the NZDA rooms in Dannevirke.  Julia … END_OF_DOCUMENT_TOKEN_TO_BE_REPLACED

Ruahine User Group A meeting was held on Monday 25 July, in the NZDA rooms in Dannevirke.  Julia … END_OF_DOCUMENT_TOKEN_TO_BE_REPLACED

Ruahine User Group A meeting was held on Monday 25 July, in the NZDA rooms in Dannevirke.  Julia … END_OF_DOCUMENT_TOKEN_TO_BE_REPLACED