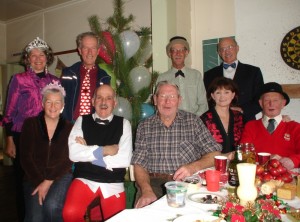 Where do I start to tell you all about our winter solstice, mid-Winter Christmas Party, held this year at the Boys Brigade lodge at Puketitiri? At the beginning, I guess. The planning had all been done and we were on our way! The weekend weather forecast was only average once again, but this was an important mission and we departed in two vehicles, more-or-less on time. We were at the lodge before 9 am, moved all our gear in and bagged a bunk each. We always bring a lot more gear, when driving ‘right to the accommodation door’, compared to carrying everything in our packs.

Five club members walked from the far end of Lotkow Road, up to Little’s Clearing and return. Three stayed behind in the lodge and one arrived late in the afternoon.

Crisp temperatures, rain and light snow showers were forecast and we got them all during the walk. The small group set a steady, brisk pace, which helped to keep us warm. This track is sheltered most of the way, by scrub, secondary bush and pinus contorta, but we got great views of the snowstorms swirling over the Kaweka Range. We were in a better place, for sure!

We stopped very briefly at Black Birch Bivvy for a group photo, and arrived at Little’s Clearing car park for an early and rapid lunch. We started out to find an old track, for an alternative return, but soon gave up, retracing our steps in the snow for our return journey to the car. We got back about 3.30 pm, for a cuppa and a shower.

At the lodge, Yuletide decorations had been completed, including the usual Winter Solstice Christmas tree, and the residents were all formally dressed for dinner – very smart indeed. This year, a proper dinner was planned and the theme was naturally Dress for Dinner. We all enjoyed snacks, mulled wine, a wonderful meal that included beef stroganoff, roast chicken, veg and salads. Then desserts, which included pavlova, ice cream, rum cake, and winter dried fruit salad. We enjoyed a convivial atmosphere, in a beautifully warm lodge. Father Christmas made an appearance and distributed gifts. And you wouldn’t believe that nine adults could be so highly entertained by two toy mechanical chickens doing their dance on the lounge floor – it was hilarious!