On a very pleasant Friday afternoon, six of us set off in Ted’s van, headed for Tuai. The van was full to the brim with gear and food for the long weekend. After a speedy trip, featuring a dramatic 180 degree corner on gravel, we arrived safely and set up camp in the Tuai bach. Ray rapidly got the fire going – the climate is markedly cooler up there. 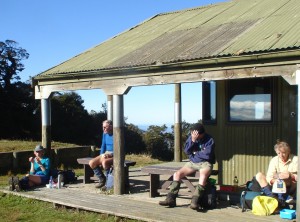 We had decided on a tramp to Panekiri Hut, the first on the eastern side of the Great Lake Walk. We awoke to a glorious Saturday, and were soon at the Onepoto car park. The legendary mist was on the lake, with the promise of a good day ahead. The track ascends from just above the lake, which is 600’ above sea level, to the Panekiri bluff. Views of the lake, and the mist hanging above it, were magical and wonderful. The bird song was good, and the bush lush. We took photos at every opportunity. At the trig, we stopped for a good few minutes to drink in the view. The lake has many arms, which are not fully visible from the lakeside.

Once on top, the track undulates through bush, with glimpses of the lake before you re-enter the bush, which changes to beech trees, with angular shapes caused by the wind battering they get on the tops. The sun shone on the lake, giving it a mirror like look. We met a couple from Gisborne, who were walking to Waiopaoa Hut. From there, they were being picked up by a mate with a boat. A nice way to walk part of the track, we thought. We arrived at Puketapu trig (1180m), which is the site of the Panekiri Hut at noon. It had taken 3 ½ hours. The hut is relatively new and sleeps 36. The view from the grassed area over the lake is unsurpassable. We settled down for our lunch for an hour with our backs against the corrugated wall, which acted as a back warmer for a short while before starting our return.

We met 17 trampers in various groups who were making their way to the Panekiri Hut for the night and then walking around the lake. The trip down is easy, and we did it in 3 hours. Ray had made it to the tops, and had a good snooze in the sun, before starting his return to the van.

Back at Tuai, we met with three others who had travelled up on Saturday morning. They had decided against tramping up to meet us on the track. That evening, we heard many stories and drank and ate. 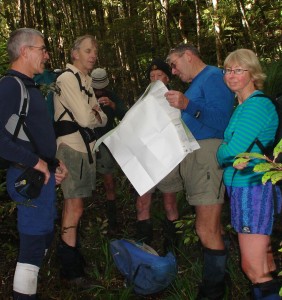 On Sunday, we decided to walk to find Ward’s Hut in the Aniwaniwa valley, which was on some maps (1999 vintage). The day was again clear and once we were over the range and in view of the lake, we could see that a reasonable frost had occurred that night. The track starts down past the waterfall road, which we all viewed. The frost on the grasses and the still river made for great photos. The level track headed north-east, then became very muddy. At times, we found alternate tracks, which avoided the bog, but at other times you just had to walk through it. Several of us got up to our knees in it. We crossed several streams, one via a few planks and trees, using overhanging trees for additional balance. The track was in a wide valley floor with the Ngamoko range in the distance. The trees had been milled and we found remains of some milling gear. Once milled, the valley had been burnt out so the remains of large trees with blackened stumps were dotted here and there. The first revegetation of kanuka bush was evident. On reaching the edge of the grassland, we searched for the hut, but could only see various bits of tin and other remains. None indicated a hut had been there, so we walked further into the bush. Wonderful young rimu trees, and other older tall native trees made this a cool track.

There were only a few markers and it was obvious that this was not a well maintained track. After a short while, we stopped and decided that heading for Gisborne was not on the agenda.

We returned back to the bush edge and stopped for lunch. We heard some rifle shots, and then decided that there must be a range nearby. We found it just off the track near the start of the track and it is marked on the Terra map.

We got back to the van at 2:00 pm. The weather had remained sunny and fine all day, and the walk had been a change from the usual track walk we do, so we had enjoyed the fun of making our way through the swamp (except for Ray, who ended up with one leg up to the top in the bog).

We again had an enjoyable night, finishing off Paul’s 70th birthday cake, and tasting Simon’s Doris Plum liqueur and Paul’s pancakes, Ted’s cherios along with our usual other nibbles. We still had room for our own dinners, before settling down for some more stories in front of the fire.

On Monday, we all had breakfast supplemented by Brian’s scrambled egg. After the clean-up, and clear- out, we all headed up to Lou’s Lookout. This is a 10-minute walk up to a viewing platform, where again we had a panoramic view of the lake, which was appreciated by those who had not been up to Panekiri.

So we all had a wonderful weekend, although the fisherman (Brian) didn’t bring home any trout (caught and released a small one and hooked and lost another). The accommodation in Tuai served us well, and our thanks for Paul for securing it for this lovely weekend tramp.

Mackintosh Hut/Rogue Ridge, Kaweka FP, Saturday 17 September 2022 Banner Photo: The leaning sign at the top of Mackintosh Spur It was a sunny, … END_OF_DOCUMENT_TOKEN_TO_BE_REPLACED

Shine Falls, Local, Wednesday 7 September 2022 Banner Photo: Group selfie and the falls Nine of us set off on a very frosty morning from Park … END_OF_DOCUMENT_TOKEN_TO_BE_REPLACED

A-Frame to Stanfield Hut, Ruahine FP, Saturday 3 September 2022 Banner Photo: At the A-Frame Hut We had a full vanload booked to do this trip. … END_OF_DOCUMENT_TOKEN_TO_BE_REPLACED