A group of 14 set out to explore the Aorangi Forest Park/Palliser Bay area from a base at Lake Ferry. We enjoyed some good tramps in an area that was new to most of us, in good weather and with good company; not to mention some ballcock moments. 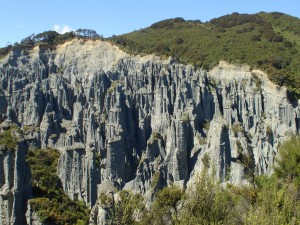 After driving down, we went directly to the Putangirua Pinnacles; a valley full of fantastic geological formations (hoodoos). This area featured in The Lord of the Rings and it’s easy to see why. We enjoyed an afternoon tramp before checking in to the Lake Ferry Camp and a relaxed meal at the conveniently located “local”.

Next day, we drove to the end of Haurangi Rd in the middle of the Forest Park to tramp in the vicinity of Mount Ross. Most set out to do a high level circuit which included Mount Ross, while a smaller group set out down river to Sutherlands Hut. Anecdotal evidence has it that this group, while later looking for Averill’s Hut, actually got higher on the mount than the first group who had had trouble locating an acceptable route up. All members were back at the vehicles at around 3pm.

Day three was our opportunity to explore the Palliser Coast. Our first stop was at Ngawi, a small coastal fishing hamlet with an interesting boat launching technique off a steep shingle beach. They use huge trailers towed by big semi-retired bulldozers. Next was the fur seal colony at Cape Palliser and the adjacent rock formations known as Kupe’s Sails. Then it was off up the 250-step climb to Cape Palliser Light for fantastic views and the T-shirt (but there wasn’t one).

Our tramp north along the coast toward White Rocks started from the lighthouse. Along the way, we had great coastal views and a detour to check out a waterfall. Lunch was at the DOC Ngapotiki Lodge, a nice enough hut with a good view – but hardly a lodge. Then it was back along the track to the cars. It had been another great day, the turquoise sea being a highlight.

It was good to be in a new area with different features, different bush and more bird life. Once again, this was a great club event that resulted in a number of people getting into a different area enjoying new tramps. Thanks to Alison, our leader, motivator and organiser. And thanks to all the others on the trip for their company.

Aranga Hut On Saturday 14 January the tramp was changed to a loop in the Northern Ruahine Range. … END_OF_DOCUMENT_TOKEN_TO_BE_REPLACED

Aranga Hut On Saturday 14 January the tramp was changed to a loop in the Northern Ruahine Range. … END_OF_DOCUMENT_TOKEN_TO_BE_REPLACED