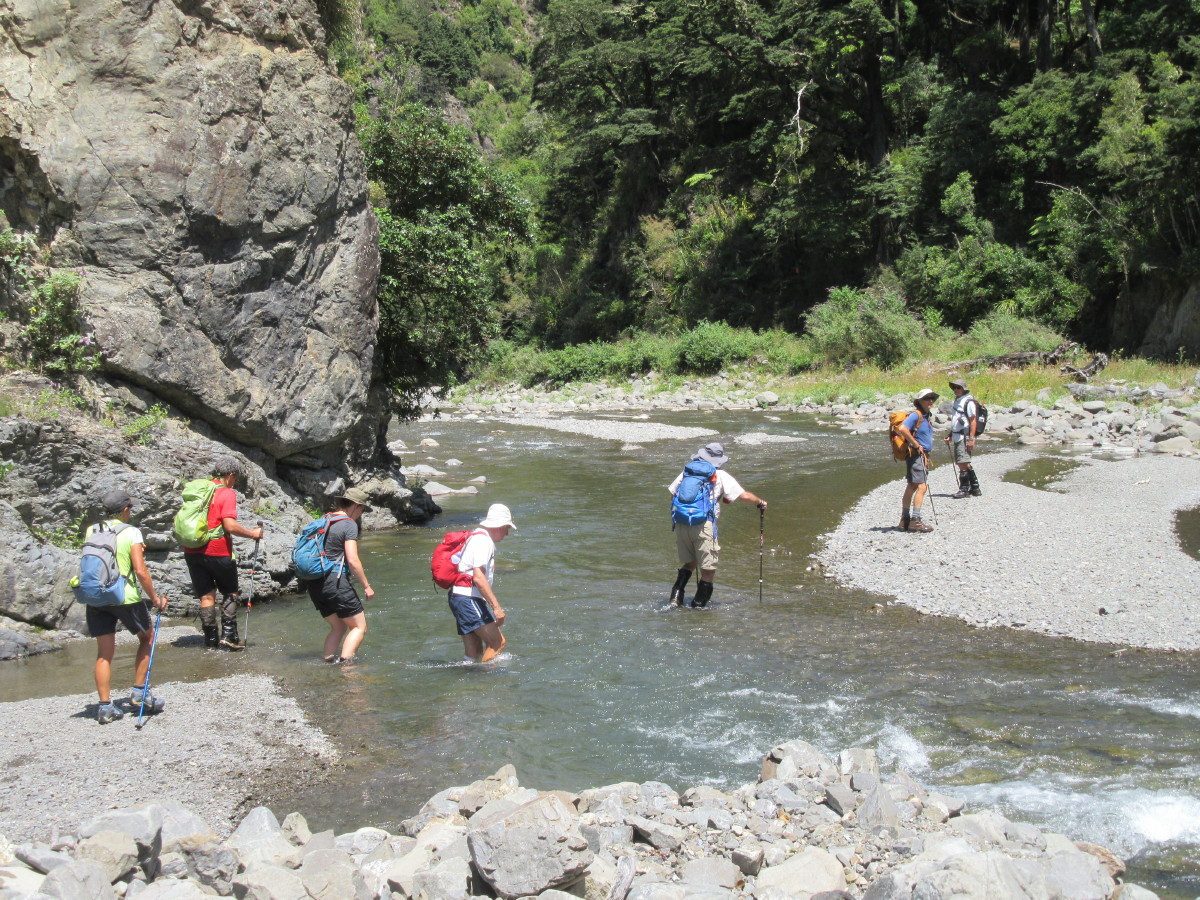 Another potentially hot day was ahead of us 11 trampers, aiming for the Ruahines. We travelled down State Highway 50 to Wakarara Road then onto Glenny Rd, at the end of which our tramp was to start. It had taken us an hour and a half to get there. It was at this stage that the lure of a cool river had us deciding to walk up the Makaroro instead of Parks Peak.

We began by walking through some up-and-down farmland and low shrubby bush. Not far from the last gate, about 15 metres from the river, we came across the sign for Gold Creek track which had eluded us on a tramp in that direction last year.

Out of the bush, you are greeted by the junction of Gold Creek track and the Makaroro River. You follow what is a broad riverbed of mainly shingle and small rock. We criss-crossed the river, making sure of our footing as the rocks were very slippery. Evidence of past major slips were clearly visible, with large scars in the tight-knit, tree-covered hills. 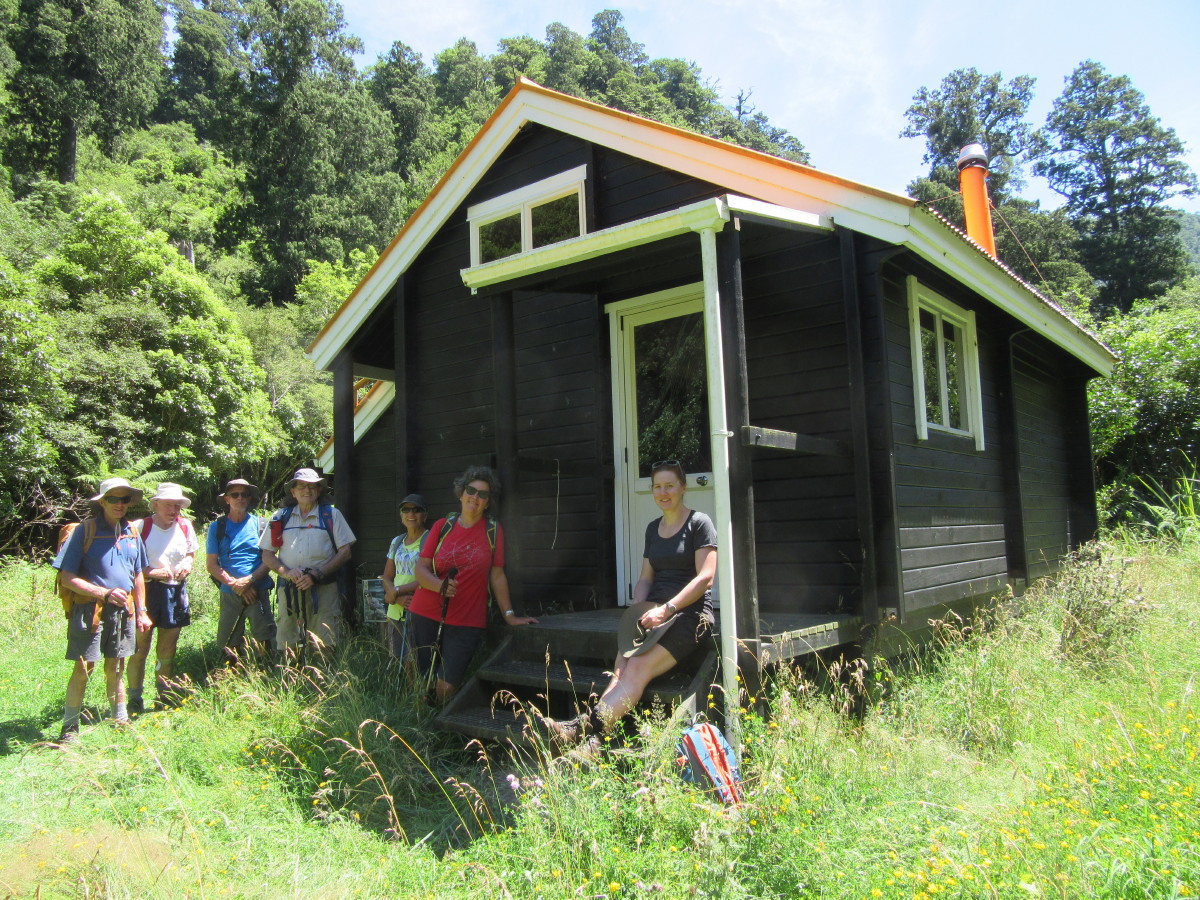 We had a short morning tea break in a shady spot along the river, then it was off again to get to the eight-bed Barlow Hut (one of the most recently built in the area). Arriving at the hut with half an hour to spare before a 12 o’clock lunch, five of us decided to go looking for a waterfall Vic had mentioned. Instead of the waterfall, we found the very narrow western end of Colenso Spur track, so it was back to the hut to join the others for lunch. 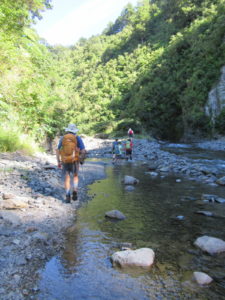 Cool in the shady river valley

When it came to heading back downriver, we all noticed how much hotter it was – so it was no surprise that some of us (including all the women) took regular dips in the lovely pools on offer. Although we missed ‘Vic’s waterfall’, we spotted another we’d failed to see on the way up. Something else that had eluded us on the way up was the other entrance to Colenso Spur track which we found thanks to Tony’s map and some persistence.

From the beginning of the tramp, we had been treated to a wonderful cloud display: thinly spread and wispy, some with some colour to them, and they only got better throughout the day.

Getting back to the van, the larger group were greeted by an open van and some pretty relaxed-looking fellow trampers.

We reached Napier just after 4.30, happy knowing the Makaroro River is safe from being dammed – for now at least.

Sparrowhawk bivvy, Ruahine Forest Park, Saturday 6 August 2022 Banner Photo: The view east, towards the Wakararas and beyond On a beautiful … END_OF_DOCUMENT_TOKEN_TO_BE_REPLACED

Prologue: The author was on the Whirinaki tramp, reported on this website under the headline 'We observe a mock turtle and the rodent of Upper Te … END_OF_DOCUMENT_TOKEN_TO_BE_REPLACED

Ruahine User Group A meeting was held on Monday 25 July, in the NZDA rooms in Dannevirke.  Julia … END_OF_DOCUMENT_TOKEN_TO_BE_REPLACED

Ruahine User Group A meeting was held on Monday 25 July, in the NZDA rooms in Dannevirke.  Julia … END_OF_DOCUMENT_TOKEN_TO_BE_REPLACED

Ruahine User Group A meeting was held on Monday 25 July, in the NZDA rooms in Dannevirke.  Julia … END_OF_DOCUMENT_TOKEN_TO_BE_REPLACED

Ruahine User Group A meeting was held on Monday 25 July, in the NZDA rooms in Dannevirke.  Julia … END_OF_DOCUMENT_TOKEN_TO_BE_REPLACED