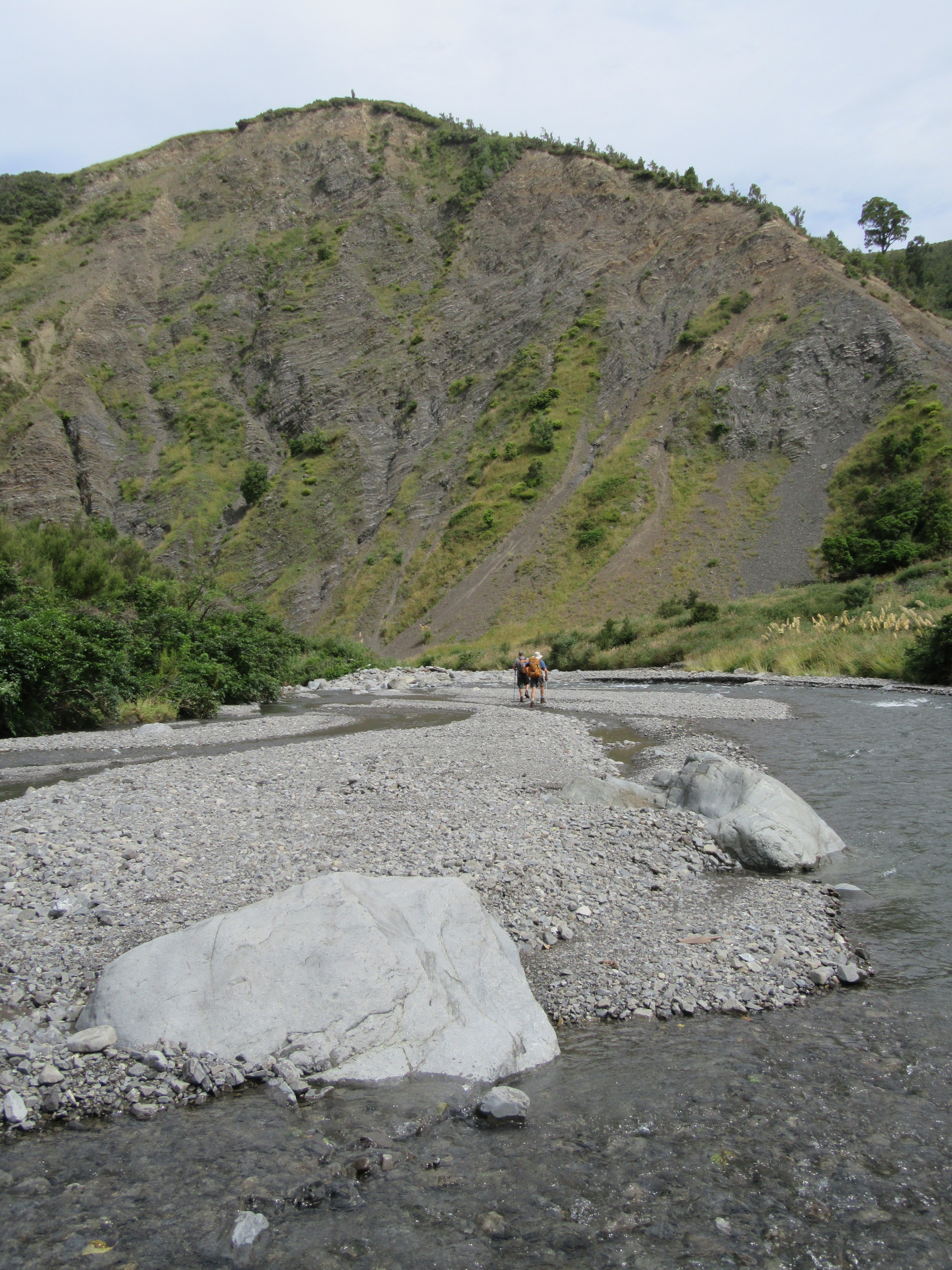 Daphne Hut, via Tukituki River. Ruahine FP, Wednesday 30 January 2019.
Banner Pix: Heading back to the junction of the Tukituki River and Moorcock Stream.

It was a fine, hot morning when we set off, with the temperature tipped to reach 31 degrees.

The tramp was meant to be Longview and Daphne Hut via Daphne Spur, but the heat was too fierce for such a climb so we opted to get to Daphne via the Tukituki River. Sue joined us at Tikokino and Malcolm at the Kashmir Road junction, with the tramp starting at the end of Mill Road.

Kelvin, Murray, Paul and Vic headed downstream and the rest of us headed upstream towards Daphne. After a slight diversion up a tributary, we found the real Tuki, which was clear and clean and just cool enough to refresh. There were a lot of river crossings and climbing around and over boulders and we made slow headway, but we were a happy group. After a while, we met a pair of hunters, one of whom had the rear end of a deer slung over his shoulders.

Sometime after 12, we were still quite a way off Daphne according to Bruce’s GPS app. So the pressure was on to get to the hut by 12.30. I was starting to tire so I called to the others to carry on. I found a shady spot with a nice rock to lean against for lunch and was just settling in when the others turned up, saying they weren’t going to make it to Daphne anyway and wasn’t this a great spot for lunch!

On the return leg, we had some swims with Dorothy being first in. The river was superb, though swift and tricky to cross in places.

Back at the van, we met up with Kelvin and the others but lost Bruce for a little while, with Kelvin threatening to make me go back to look for him. I was so pleased to see him coming up the hill!

Sparrowhawk bivvy, Ruahine Forest Park, Saturday 6 August 2022 Banner Photo: The view east, towards the Wakararas and beyond On a beautiful … END_OF_DOCUMENT_TOKEN_TO_BE_REPLACED

Prologue: The author was on the Whirinaki tramp, reported on this website under the headline 'We observe a mock turtle and the rodent of Upper Te … END_OF_DOCUMENT_TOKEN_TO_BE_REPLACED

Ruahine User Group A meeting was held on Monday 25 July, in the NZDA rooms in Dannevirke.  Julia … END_OF_DOCUMENT_TOKEN_TO_BE_REPLACED

Ruahine User Group A meeting was held on Monday 25 July, in the NZDA rooms in Dannevirke.  Julia … END_OF_DOCUMENT_TOKEN_TO_BE_REPLACED

Ruahine User Group A meeting was held on Monday 25 July, in the NZDA rooms in Dannevirke.  Julia … END_OF_DOCUMENT_TOKEN_TO_BE_REPLACED

Ruahine User Group A meeting was held on Monday 25 July, in the NZDA rooms in Dannevirke.  Julia … END_OF_DOCUMENT_TOKEN_TO_BE_REPLACED