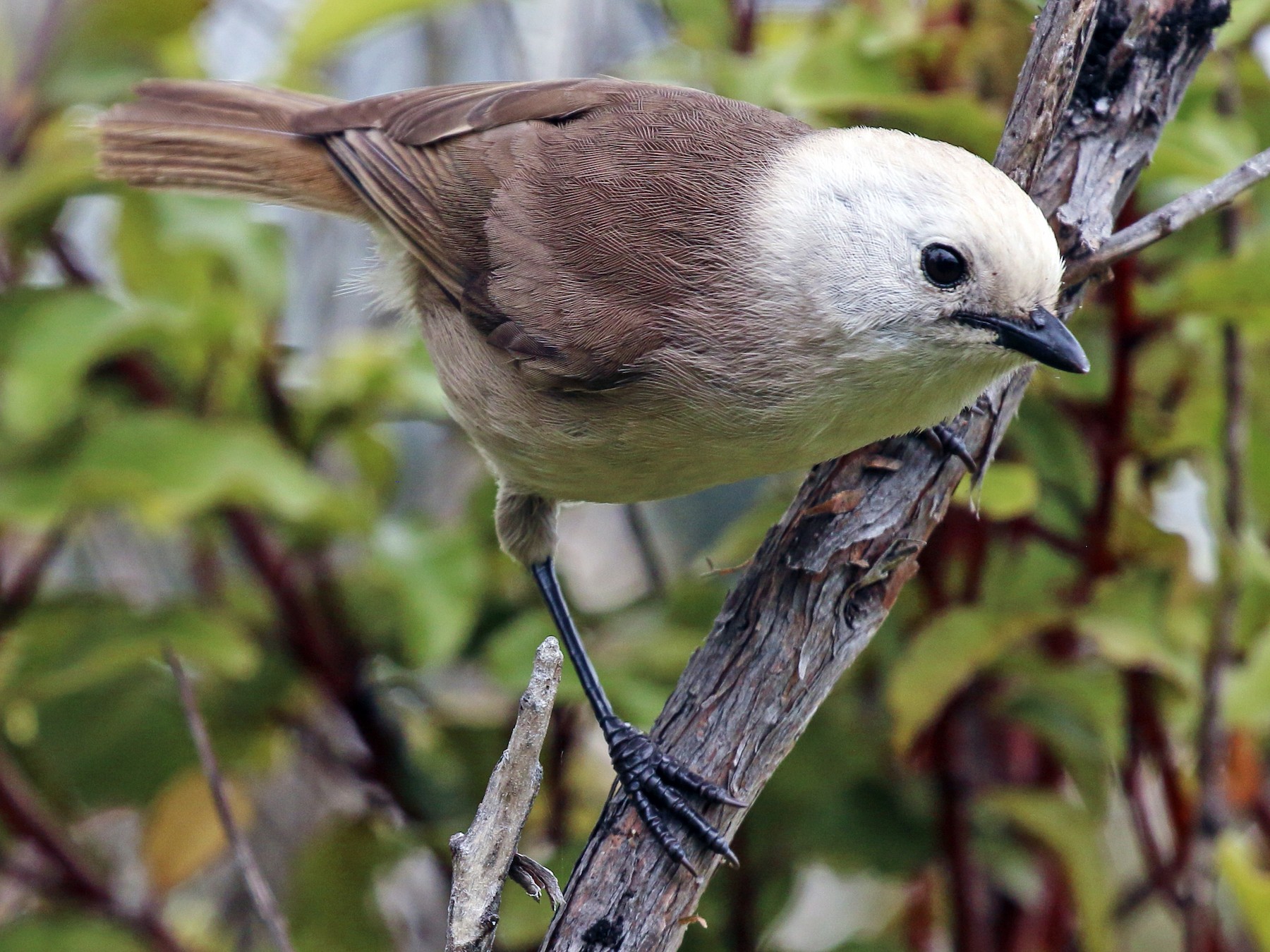 Banner Photo: A whitehead. We saw and heard a flock of them near the Parks Peak track junction. (Mohoua albicilla; Māori: pōpokotea)

Plan A was to go to Daphne Hut. This was cancelled due to the likelihood of a full and fast-flowing Tukituki River, after we had just experienced extreme rainfall due to cyclone Hale and various other rain bands coming through Hawke’s Bay. Plan B was to go to Moorcock Saddle and do a loop from there via Longview Hut and the Daphne Track. But our fear of getting stuck in the slush of Kashmir Road made Juliet, our trip organiser, decide that we should turn to Plan C: to the Park’s Peak ridge from Master’s Shelter to Sentry Box, or vice versa. 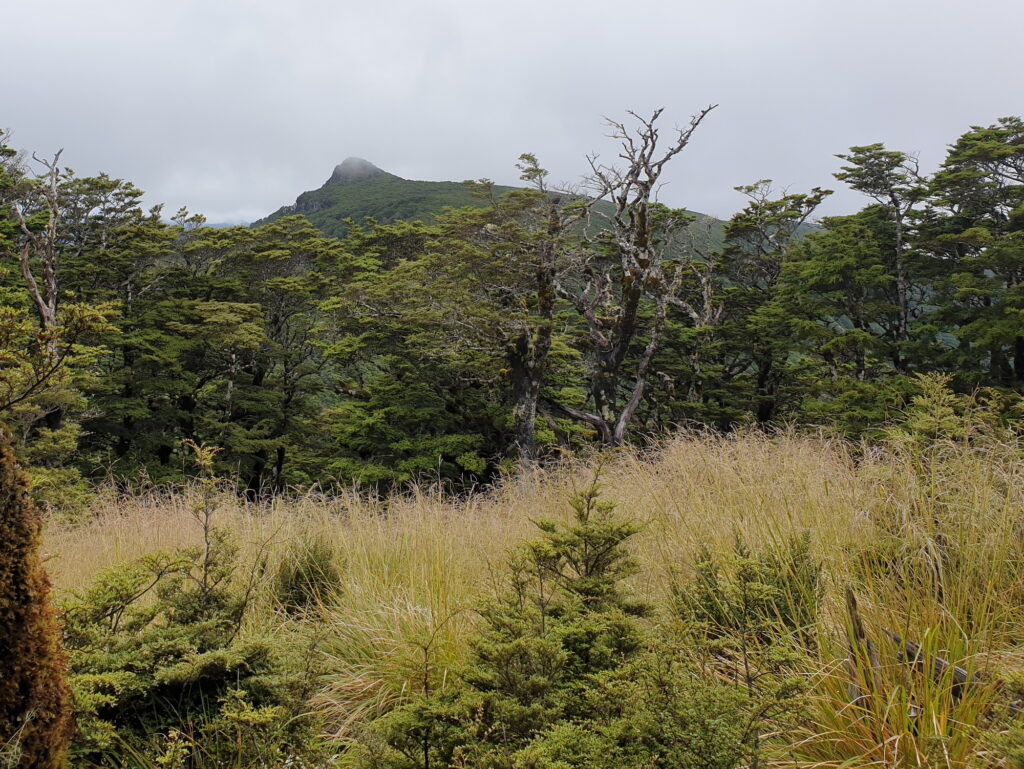 There were 14 in a van and a car. For a moment it seemed that even Plan C was going to be crushed, when just after Maraekakaho we passed a sign saying that Kereru Road was closed due to slips, but we decided to check it out and found the road perfectly passable. However, the rain had left many marks behind on the roads to the car park, in the form of mud, rocks and small slips. Thank you to our drivers for taking us there and bringing us home safely.

At the Master’s Shelter track entrance on Mangleton Road, four of us – Julia, Geoff, Sue and I (Elly) – left the van and embarked on the walk. It was wise not to take a vehicle onto the track to the shelter, because we would definitely have become stuck. The others drove on to Sentry Box car park to start the walk from there and finish at Master’s Shelter. On the tops, we would swap the van key.

I am telling the story starting from the Master’s Shelter end. We began our tramp at 8.15am. It is a steady and long climb up to the ridge. We were, however, blessed with no wind and a very pleasant temperature. We noticed how overgrown the track is. That must be because of all the rain Hawke’s Bay has had, but also because this track is probably not very often used as it does not really go anywhere since Aranga Hut has fallen into disrepair. We’ve heard of plans to reinstate this hut – which is good news, because it would definitely increase the tramping options in this area. 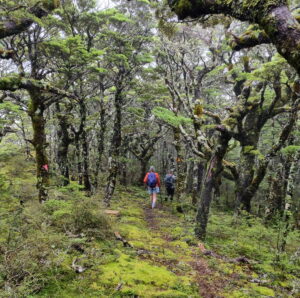 After 2.5 hours (6 km) we reached the junction on the ridge. Time for morning tea. Once on the ridge the walking became easy, although the track was very spongy in places and many a time we had to try to jump over a puddle of water. Nevertheless, in only 45 minutes we covered the 3 km to the turn-off to Aranga Hut. This spot remains special, with its beautiful tussock amongst the goblin forest.

Geoff left us here to go and have a look at Aranga, while the three of us carried on so we would not miss Juliet who had the key to the van. It took only two minutes for us to see Di and Gaye, coming from the other side. Apparently we had missed Lynette and Campbell, who had also gone to Aranga. Geoff later told us that the hole in the roof of Aranga Hut has been repaired, so if necessary the hut can be used as a rain shelter. 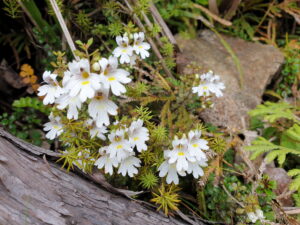 Euphrasia in flower along the track in open sunny areas

Another five minutes along the track and we met Juliet and Linda, who were the tail-end Charlies. With the key in my pocket, we continued towards the Pohatuhaha trig, but as we got closer we saw it was covered in clouds so we did not go up (the other group and Geoff, who was still behind us, did, and they said they had good views). We had lunch at the trig signpost, and, after enjoying the chattering of a group of whiteheads, reached the junction with the Sentry Box track after 12.5 km and almost 4.5 hours of walking. 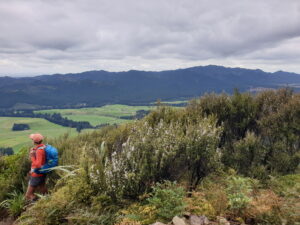 We were a bit nervous about going down. This is such a steep track and with all the rain it was bound to be slippery. Near the top, the track had clearly operated as a stream during the rains because it was very eroded, and we had to take big and careful steps to make our way down. However, once we had passed the rocky knoll, the track was not slippery at all; only close to Sentry Box Hut some of us made a slide. There was still so much water coming down from the hills that we had to carefully manoeuvre the little stream crossing two minutes from the car park. Alas, the planks that someone had kindly put in to make the crossing easier were so slippery that both Julia and I went down and ended up being very wet.

We arrived at the car park at 2.45pm, so it took us 6.5 hours all-in. The total distance was 15.5 km (this excludes a visit to Aranga Hut). We ascended 1164m, and descended 1031m – which means that the other group climbed 133m less than we did, but they compensated by going up to the trig. A good effort, we all found.

Geoff drove the van back to Master’s Shelter, where the final few people of the other group were just arriving from their descent; perfect timing. We were lucky with the weather, because driving off, we could see the ridge covered in clouds.

Aranga Hut On Saturday 14 January the tramp was changed to a loop in the Northern Ruahine Range. … END_OF_DOCUMENT_TOKEN_TO_BE_REPLACED

Aranga Hut On Saturday 14 January the tramp was changed to a loop in the Northern Ruahine Range. … END_OF_DOCUMENT_TOKEN_TO_BE_REPLACED