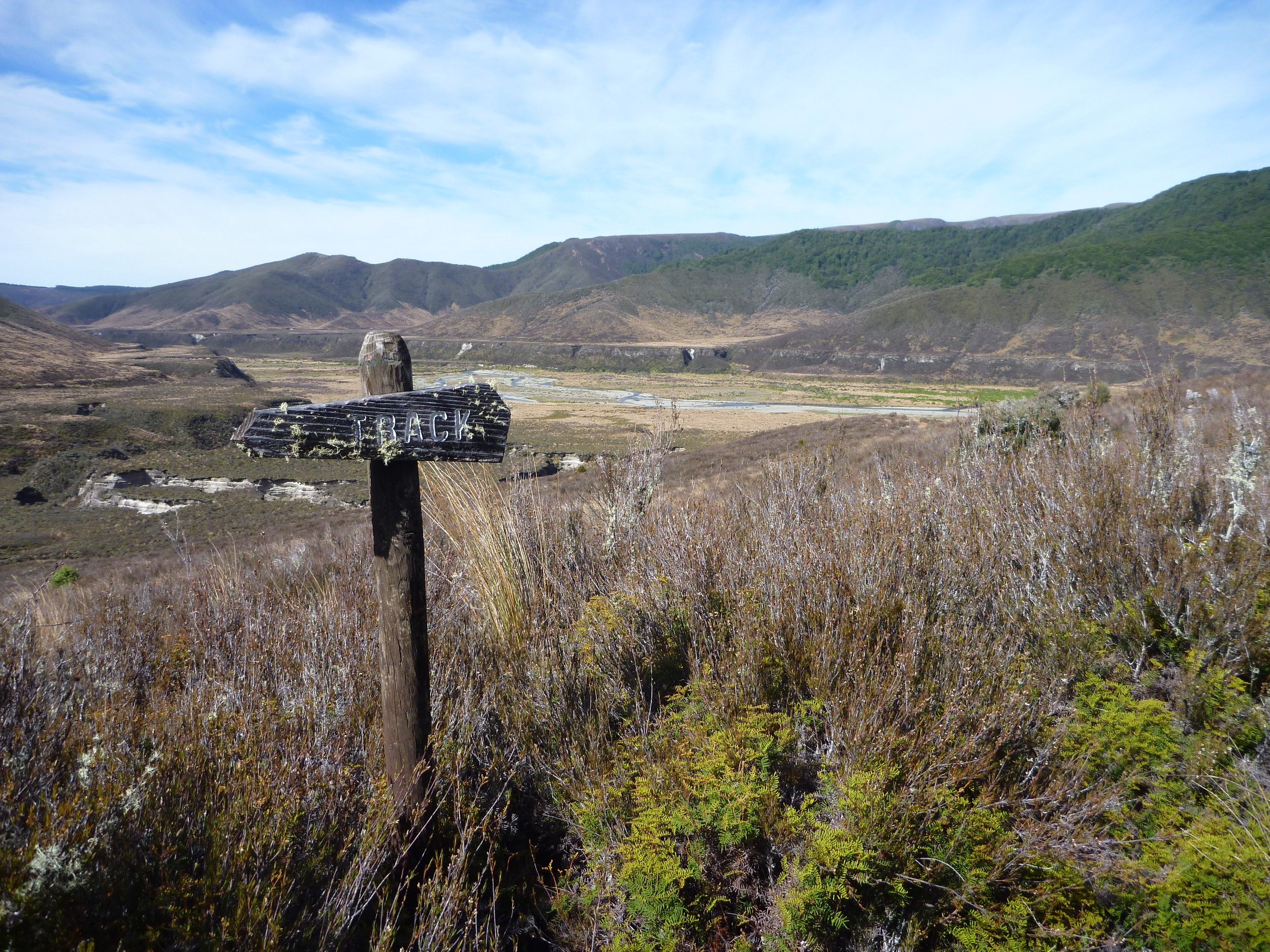 There were five of us on this tramp, which has become an annual event for us. Last year we spent time in the Ruahine Ranges, but this year we were re-covering some old ground. But that was at least 20 years ago and there were sections that Alison and I had not covered. 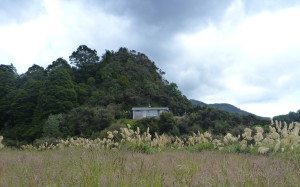 We started at the gates to Poronui Station. The main roadway which leads to the start of the track takes about 40 minutes, where the track commences following a poled route through the station. When nearly reaching the river, a sign indicates around 30 minutes to Oamaru Hut. This new track sidles around until you drop down into the Kaipo Stream. Oamaru Hut can be seen in the distance. When we got to it, we could see the huge changes that have been made. These were done in partnership between DoC and NZ Deerstalkers Association. Well done, and much improved with a part-enclosed deck and extended kitchen area. We had an early lunch on the deck before continuing up the Oamaru River.

The track follows the river and we passed through a campsite with frypan hanging from a tree. We checked the map and decided that we needed to be further up the valley before we set up camp, so continued until 4pm. It happened that we reached the Cascade Track junction at this time, and there was evidence of previous camp site here. The forecast showers arrived soon after we had set up camp, but they were not too heavy. 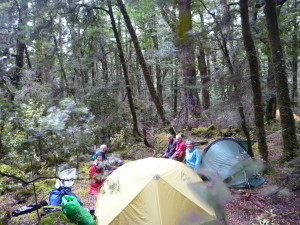 Overnight it did rain a little more, but nothing too serious. However, there were wet tents in the morning to pack up. 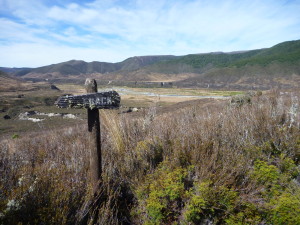 The plan was just to see how far we could reach each day. We climbed the Waitawhero Saddle, and had fabulous views down the valley to Boyd Hut and beyond. Endless tussock, with the Ngaruroro River cutting through it.

On reaching the track sign pointing to Tussock Hut from the Boyd Hut track, we headed off across the river flat. We had been this way in 2009, and this time we made the mistake of not going high enough around the river ledge. However, we soon found the route again, crossing the Ngaruroro River and making our way to the start of the climb up and over to Tussock Hut. When Alison and I arrived at Tussock, a father and daughter were in residence, having been flown in for a four-day adventure. 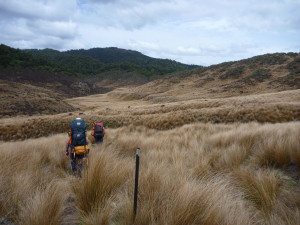 Tussock Hut has also had an upgrade, with a deck, outside wash/cooking area added, and the living area extended. Another great job which improves the hut. We lunched and dried out our tents, and waited for the men to arrive. They had decided to lunch before arriving at the hut. When they arrived, they had a further break, and chat with the ‘father’. We left Tussock hut at 2:30pm, realising that we would not make Ngaawaparua Hut today. An easy walk along the beautiful Harkness valley, with multiple stream crossings of Harkness Stream, which was great for the hot day. We arrived at Harkness hut at 5:10pm. We had it to ourselves, and enjoyed a rest on the verandah with a hot cuppa. 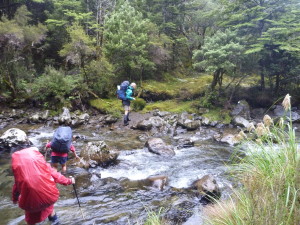 The track to Ngaawaparua Hut was gentle and well marked. The hut is one I will go back to somehow, to stay at least a night and read the stories in the book which give some history to the hut and its users.

I had read reports of the crossing of the Ngaruroro River, as the swingbridge has been removed. Having Googled methods of swimming across with a pack, I had rung alarm bells among some members of our party. They had been having nightmares about the river crossing. Well, it just shows that you should never worry about what you don’t and can’t influence, as it turned out that the river crossing was easy-peasy. We used the stick method, with the five of us all hanging on to it. It worked a treat and we only got wet up to our waists.

We quickly found the old track, and had read advice that we should stick to the ridge. Here and there are some track markers which were much appreciated. At times we had to bush-bash, but nothing too serious. 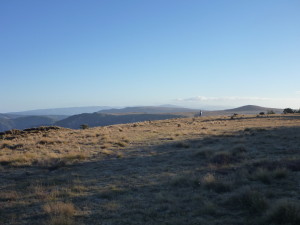 We stopped for lunch after climbing for 45 minutes, but soon Alison and I were getting too cold from our wet clothing and decided to continue. We reached the main track junction to Otutu Hut at 1:50pm (1373) and continued on, reaching Otutu Hut at 2:50pm. Two hunters were in residence, and we brightened their day as they had spent three days with nothing to show for it due to high winds. We decided to camp, as the weather was fine. The views from Otutu Hut across towards Mt Meany, Mt Manson and Kiwi Saddle are spectacular.

We all agreed that we would go via Mt Manson, so it was a drop down to Manson Creek, and up again to Mt Manson. We achieved this in two hours and were all feeling good. We took in the views. Then on to the next track junction, where the Spion Kop ridge track is clearly visible. We all loved the cable crossing, which took us 25 mins for the five of us (five each). John D did a lot of the winding. Lunch in the shade at Rocks Ahead Hut, with the view of the Ngaruroro River. 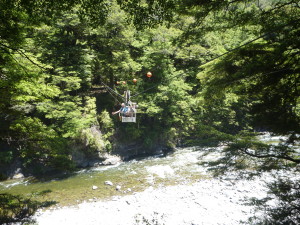 On our second climb of the day, the DoC sign indicated 2hrs 30mins to the junction to Back Ridge Biv. On reaching the top, I took off my boots to give the feet a breather. After another view stop, we headed off to Back Ridge Hut. We arrived at 6:00pm, with some absolutely shattered from the long day. However, a wash and some food went down a treat. We had the hut to ourselves and crashed early. 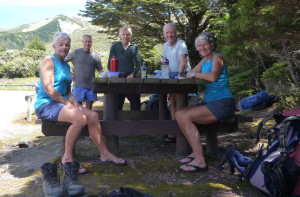 We started close on our usual time and climbed up the North Ridge route to the Kaweka tops. Another gorgeous day, with 360 degree views. The wind picked up so we continued on over the top, reaching the Makahu car park at 11:00pm. We had been able to telephone our pick-up and advise that we would be earlier than expected.
So we sat at the bench and relaxed. Our Bundabergs duly arrived and we all had no complaints about the weather we’d enjoyed over the past five days. It was a challengingly long Day 4, but altogether we had a wonderful tramp.

Our thanks to Brian and Russell and also Marc for assisting with the transport.

Sparrowhawk bivvy, Ruahine Forest Park, Saturday 6 August 2022 Banner Photo: The view east, towards the Wakararas and beyond On a beautiful … END_OF_DOCUMENT_TOKEN_TO_BE_REPLACED

Prologue: The author was on the Whirinaki tramp, reported on this website under the headline 'We observe a mock turtle and the rodent of Upper Te … END_OF_DOCUMENT_TOKEN_TO_BE_REPLACED

Ruahine User Group A meeting was held on Monday 25 July, in the NZDA rooms in Dannevirke.  Julia … END_OF_DOCUMENT_TOKEN_TO_BE_REPLACED

Ruahine User Group A meeting was held on Monday 25 July, in the NZDA rooms in Dannevirke.  Julia … END_OF_DOCUMENT_TOKEN_TO_BE_REPLACED

Ruahine User Group A meeting was held on Monday 25 July, in the NZDA rooms in Dannevirke.  Julia … END_OF_DOCUMENT_TOKEN_TO_BE_REPLACED

Ruahine User Group A meeting was held on Monday 25 July, in the NZDA rooms in Dannevirke.  Julia … END_OF_DOCUMENT_TOKEN_TO_BE_REPLACED