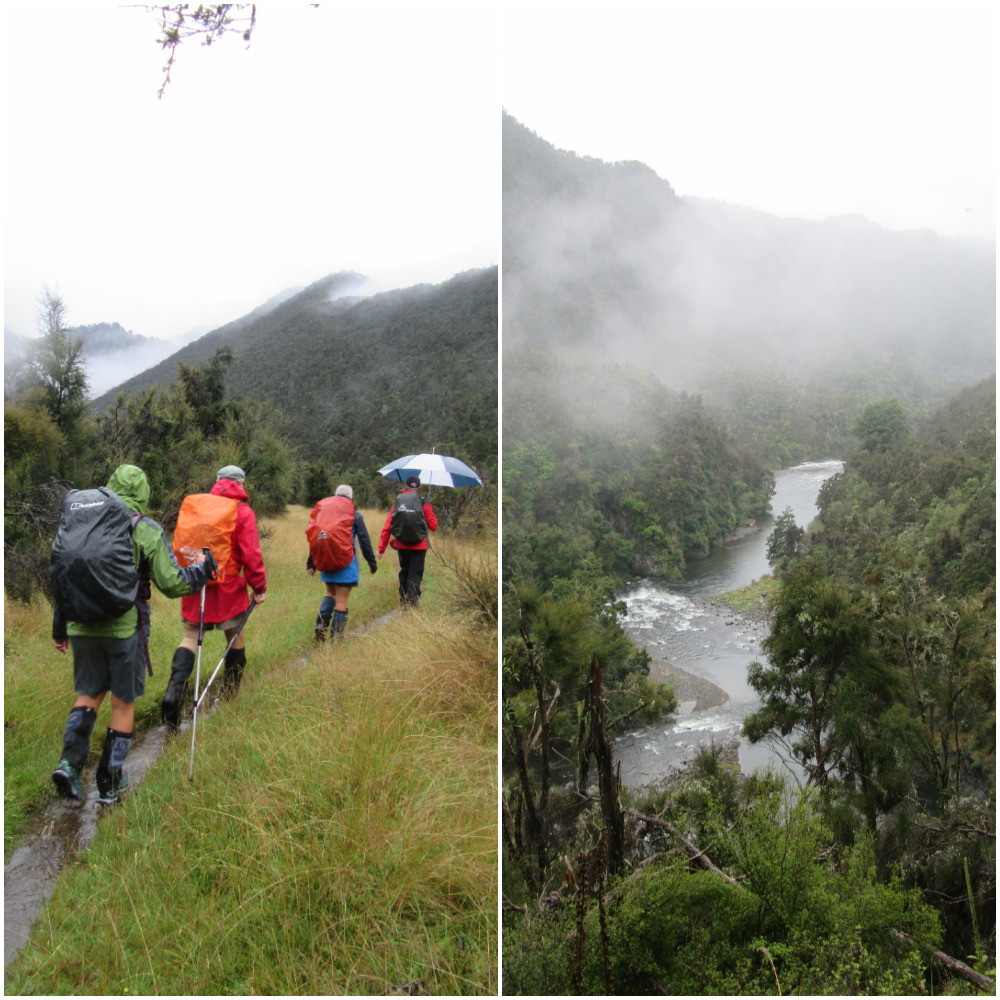 Due to the inclement weather, there were not many takers for the planned trip to Longview Hut/ Makaretu Hut, so it was decided to go instead to Te Puia Lodge.

Sue Martin, Graeme Taylor, Marie Deroles, myself and John Dobbs drove in John’s car to the Gums car park. It was raining fairly steadily so we were in no hurry to leave the shelter, and stayed chatting to a couple of fishermen till the rain eased. It was warm and humid, but wet so we needed to leave the rain coats on. As there was no wind, John decided to use his umbrella, even though he had full wet weather gear on! 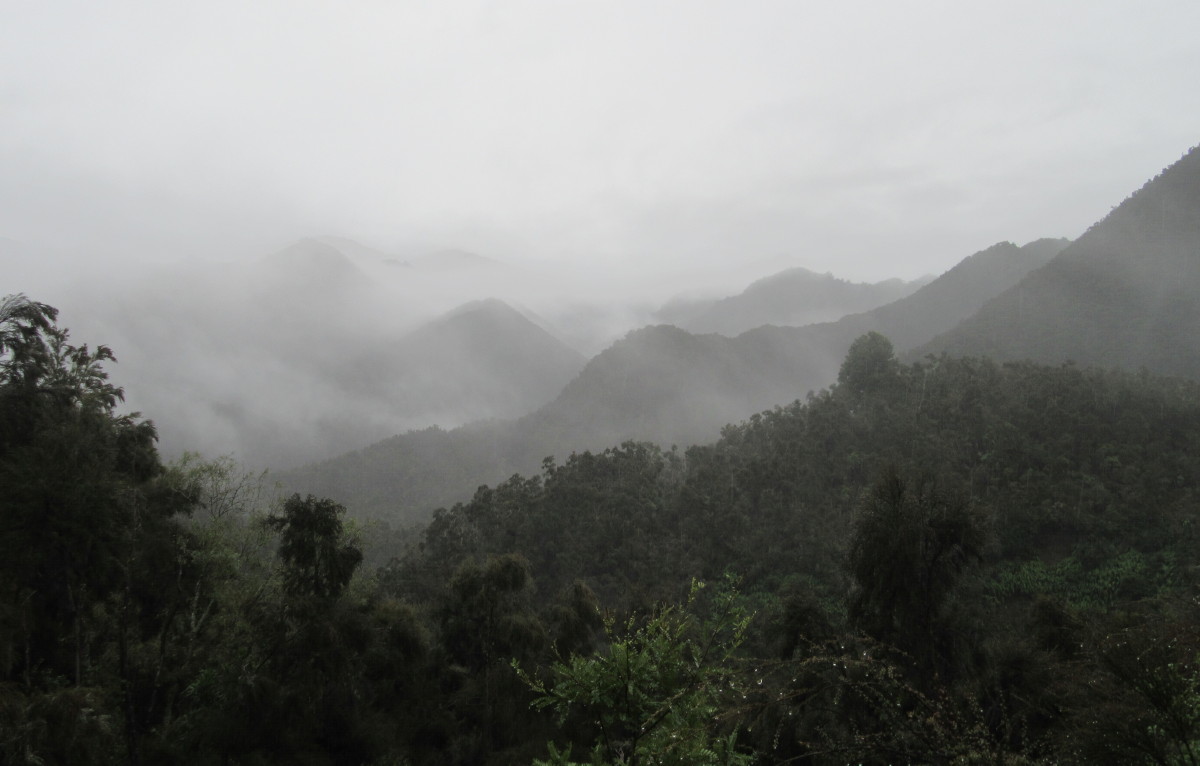 It was a very pleasant stroll along the river which was running a little high but not discoloured. We arrived at the lodge 2 and 1/4 hours later, to find it empty – which was surprising as there were vans and cars in the car park.

Te Puia has had a makeover, freshly painted, the wall between one bunk room lowered, solar panels for lighting, and an all-round tidy up.

The light rain was now a steady drizzle so after a long lunch, we headed back, no hot swim this time, much to Marie’s disgust!

Not far from the hut, we met 18 students and teachers from Iona and Lindisfarne colleges. They had camped overnight at the Gums where they got pretty wet from the previous night’s rain. The group looked fairly bedraggled and would have been pleased to see their accommodation for the next night.

The steady drizzle turned into rain as we approached the last climb where we met two Aussie fishermen, who had been camping by the river. They had spent eight days fishing and were lugging very heavy wet packs back up the hill. They have been coming from Melbourne to the Mohaka for years, a real boys’ trip.

In the shelter, still more blokes, this time a couple of older guys having a lovely picnic. They had driven out for the day (I think just to get out of the house) and intended to perhaps have a little hunt. Graeme gave them some advice on where to go, but as it was pretty wet we were not sure how far they would go. 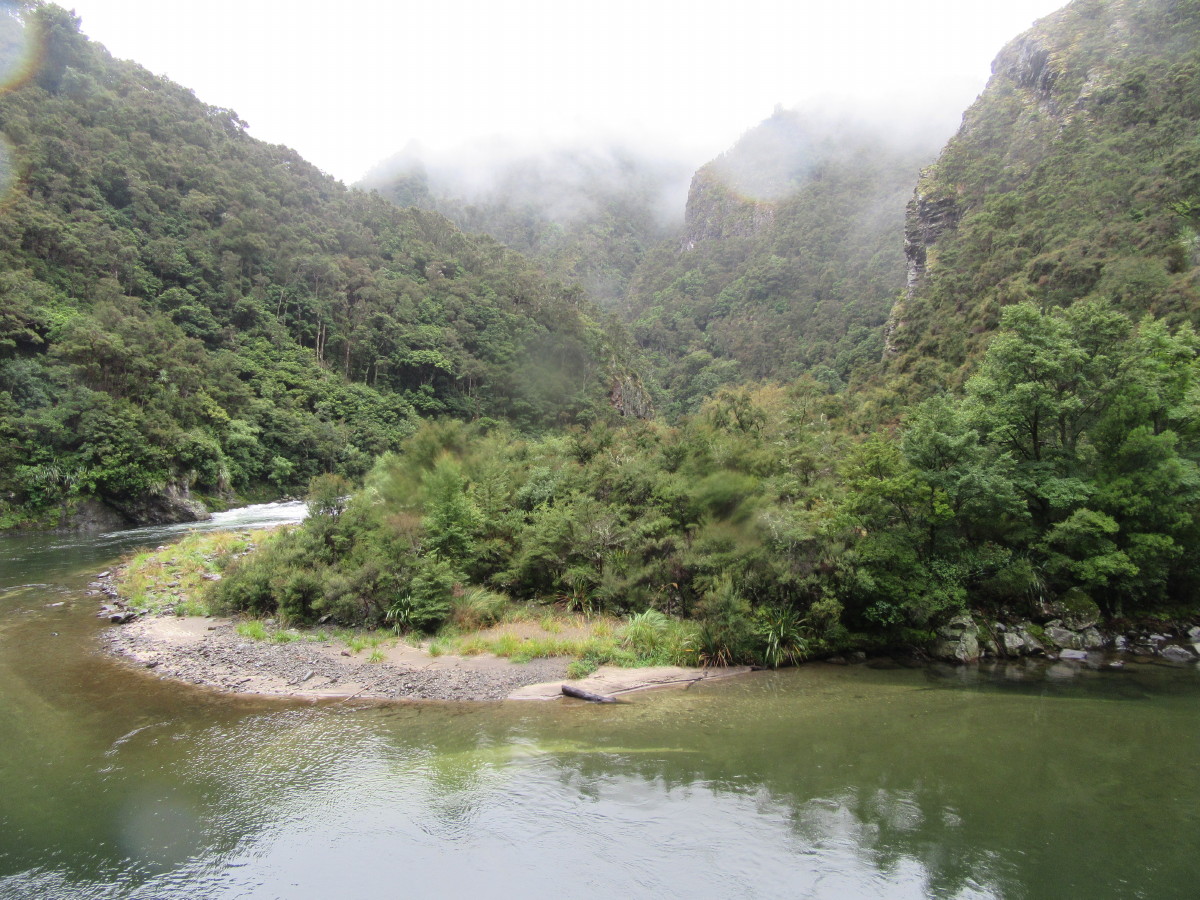 Marie once again wanted to get into the hot pool but nobody else was interested so we piled into the car and set off for home. Just as we were doing this, another car turned up, three people jumped out and were a bit disappointed to hear there were already 18 at the hut.

For a wet day, the place was pretty busy!

Thanks to John for driving and thanks guys for an enjoyable day; it was good to get out.