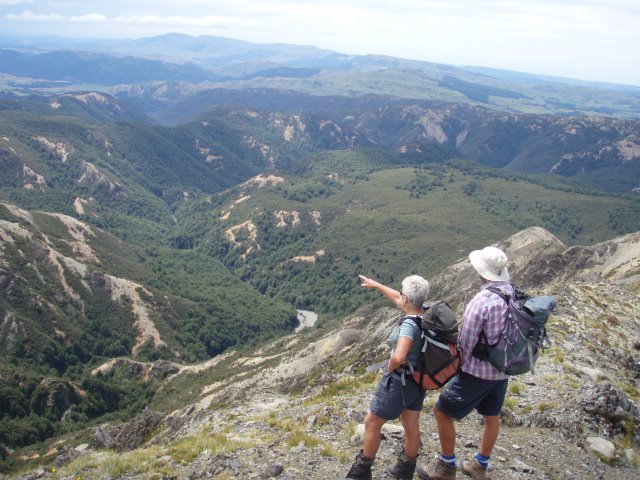 The forecast westerly wind had not come to much as we pulled into the Makahu car park, so the planned trip along the Kaweka tops was go!

The trig which can be seen from Kaweka Flats track

A group of five made it to the tops in good time, and headed north along the range. At that stage, we had views of Mt Ruapehu, but the cloud layer was thickening and soon the mountain was out of sight. The wind had picked up and was a little chilly, so just before Dicks Spur we dived down out of the wind for a rest stop and a chat. As it was now 11.30am and with the wind rising, it was decided Whetu was a ‘no go’ and we didn’t feel like battling the wind back up the hill the way we had come, so it was a descent down Dicks Spur. This was new territory for some and it had been a while since I had been down this spur, but with some guidance from our visitor, it was relatively easy.

The track joins the main trail to Kaweka Bivvy from Makahu Saddle and after finding a little shade, we stopped and had a second lunch. It was definitely a lot warmer down here!

We arrived back at the car park round 3pm and caught up with what the rest of the party had done. Three had made the top, had a look round then descended; the rest had wandered along to Kaweka Bivvy for the day.

The wind was definitely stronger now, so we were pleased we had made the decision to get off the tops when we did – making for an enjoyable day out.