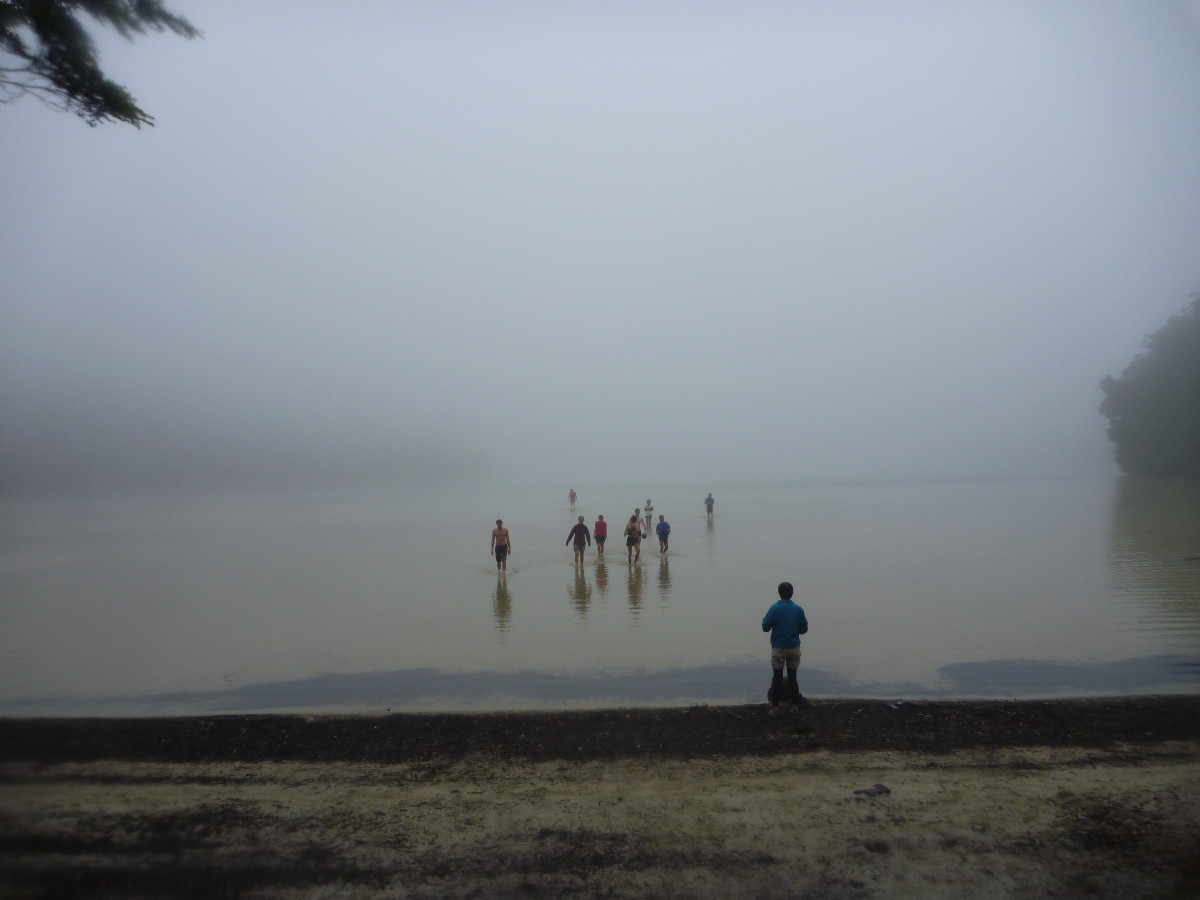 Three of us (all names starting with J and hence the title) headed out of Napier at 7am on Saturday morning in John’s new car. It handled the trip to Lake Waikeremoana with no problems at all. The only downside was the wet weather but we went hoping that the forecast of clearing weather on Sunday would eventuate.

Day 1
We made our way to the Shuttle transport arranged at Aniwaniwa by 9.40 am and our hopes of an empty hut for the first night were fairly high when the lady driver told us that we were the only trampers she had dropped off that day at the Manuoha Track road end car park. So we set forth into the bush amongst all the rain.

It was steady uphill most of the way with only very quick stops for food to keep the energy levels up. Probably because of the rain, there was very little birdsong apart from the odd call from a long-tailed cuckoo. There were a couple of places towards the top that could have had views, but all we saw was cloud. 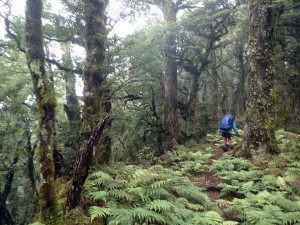 The DoC signage suggested a 7 hr walk to the hut but in fact 4.25 hours later at 3pm we were delighted to see the Manuoha Hut just past the trig station. Unfortunately, we found six members of the Auckland Tramping Club already ensconced but as usual in these situations, room was found for all to be accommodated. This was helped by two of the ATC deciding they would rather tent than be in a crowded hut. So we settled in for what we thought would be a slightly cramped night. Next thing, however, another group of five arrived and they turned out to be the advance party of 10 from the Auckland University Tramping Club. So there we were, with 19 people sharing a six-bunk hut and minimal deck space.

The students were a great bunch of kids who took it all in their stride. They borrowed some duct tape to make running repairs to a tent with broken poles, and rigged up a tarp to extend the ultra-small deck so that there was space for people to eat dinner out of the rain; not everybody could fit in the hut at one time. The students were having a combined dinner which proved a good idea as we were able to share the kitchen space and, when it was their turn, four or five people did the kitchen work while the other students waited outside. The rest of us stayed out of the way on our bunks watching the whole process. During all of this, we had the fire roaring to dry out 19 sets of clothes. Consequently the night in the hut (with 11 people inside) was extremely hot initially.

Day 2
Breakfast the next day was a repeat of the kitchen space-sharing exercise but eventually everyone got fed and set off. We were walking through the fantastic goblin forest with lichen and moss draped all over the branches, giving quite an enchanted feel to the place. Unfortunately, it was still raining so again it was a quick walk with limited stop times. 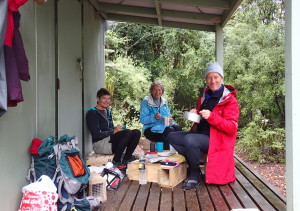 We turned the hut warden veranda into our kitchen area.

We knew that the Sandy Bay Hut was fully booked (two groups from Auckland Tramping Club and the same University team as the night before) so it was a night to pitch our tents. This was in a delightful area of bush beside the lake edge. In spite of the rain, it wasn’t cold so a swim in the lake was called for. It was fantastic, with shallow water for some way out but the water became warmer further away from the shore – some form of thermal activity, I suppose. It certainly felt good after two days of walking. That night we heard a morepork, then the loud screech of some other bird. It might have been a kiwi.

Day 3
Julia braved the lake again for another swim but it didn’t appeal so much to John and me. After breakfast, we took off on the last leg out. Finally the sky cleared and by the time we got to the shelter at the other end of Lake Waikareiti, the sun had finally come out in all its glory.

We made it back to the road end on a track that was like a two-lane highway compared with the previous routes. After arriving back at the car and getting changed, we had a side trip up the road to see the fantastic Papakorito Falls. Then we had the trip back to Napier, only stopping at Wairoa to sample the famous Ostler’s Bakery pies.

I could see this could be brilliantly scenic trip when the weather is good. The track was in the main well-marked and easy to follow. Sandy Bay was a delightful spot that I’d be keen to explore more in better weather.