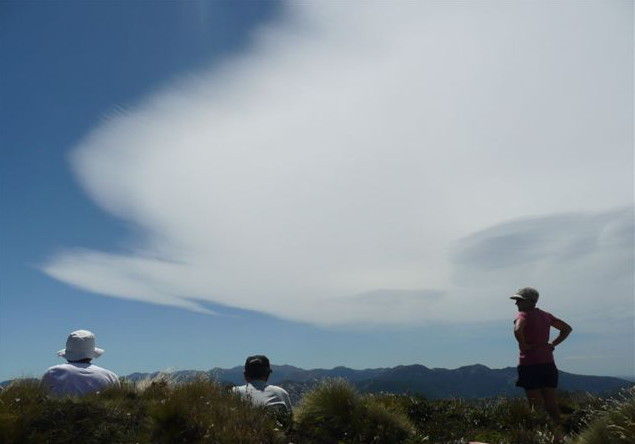 A favourite tramp was on the programme for today – maybe the reason for the large turn-out. Our trip took us up the Taihape road, over the ‘Gentle Annie’ to Timahanga Station, the property of Jenny and Jack Roberts.

With their permission, we drove through the station to a park near the old homestead site.

The track starts out as a farm road, turns and crosses a small stream, then leads into a large stand of native bush. Here you pass by some magnificent trees, mainly beech ( red and silver) but also a number of large rimu. We were sheltered from the wind here but as we gained height, finally emerging into the open, we met the predicted strong westerly. However, the wind wasn’t as strong as feared and as we made our way through scrub that was high and scratchy at times, it was nice to stand in the breeze to cool down. 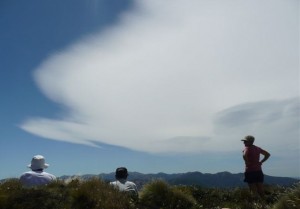 We reached the sandy Hogget area in time for an early lunch, then spent some time studying the wonderful views of the western side of the Kaweka Range, followed by a side trip over to an old sign post for a group photo with Mts Ruapehu and Ngauruhoe in the background and Ngamatea Station in the foreground. We decided that a dust cloud by Mt Ruapehu was caused by strong winds blowing over the Rangipo desert, quite an amazing sight.

We retraced our route, stopping to take in as many views as possible before descending back into the bush where, even though it was shady, it was still very warm. The group arrived back at the car park around 3pm, pleased to get their boots off and have a cool drink. A great day out, and thanks so much to Jenny and Jack Roberts for continuing to allow us access to this wonderful area.

Aranga Hut On Saturday 14 January the tramp was changed to a loop in the Northern Ruahine Range. … END_OF_DOCUMENT_TOKEN_TO_BE_REPLACED

Aranga Hut On Saturday 14 January the tramp was changed to a loop in the Northern Ruahine Range. … END_OF_DOCUMENT_TOKEN_TO_BE_REPLACED