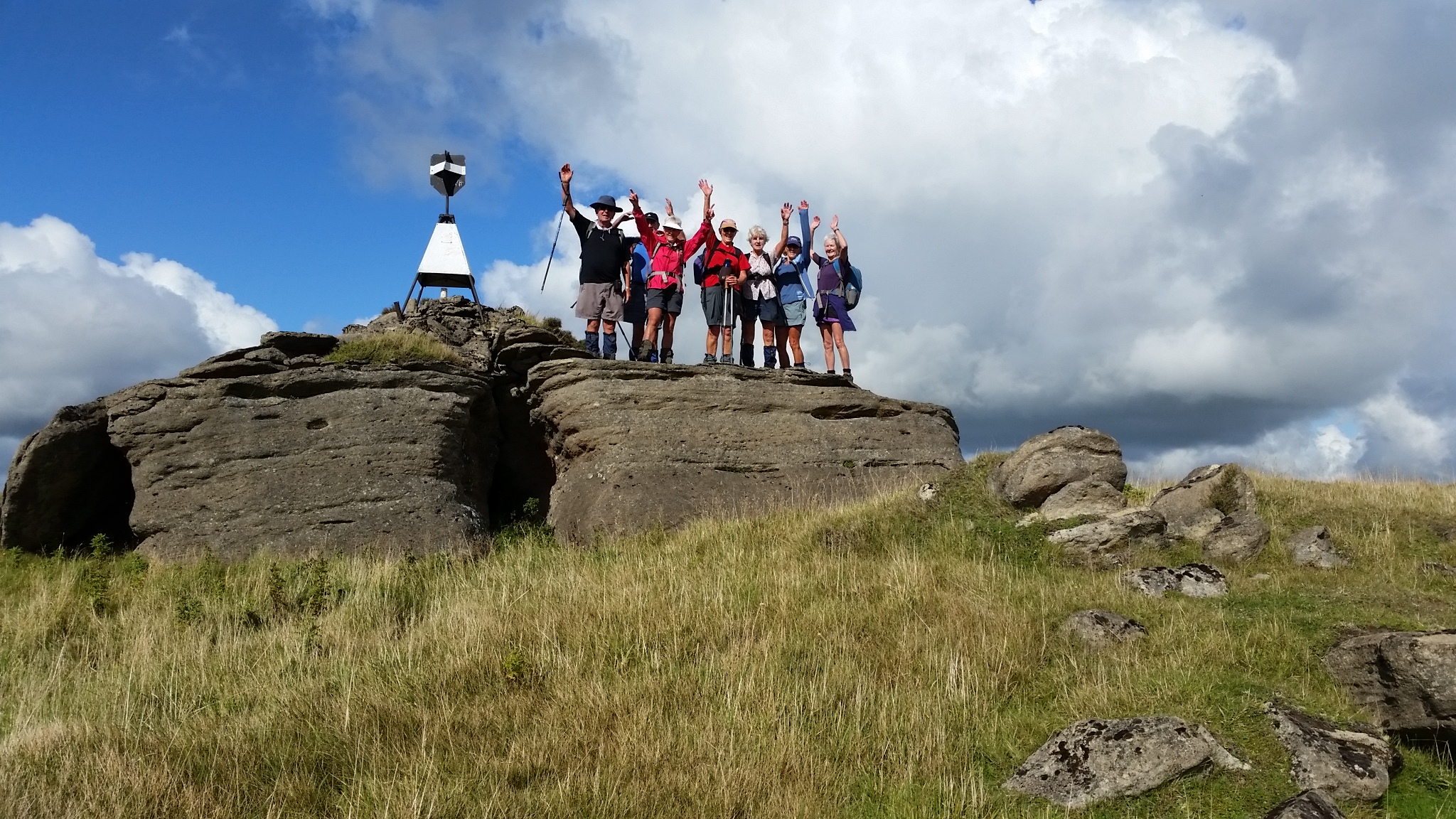 There was a cool breeze at the car park of the Boundary Stream walkway on Pohokura Rd, so (after organising for Vic and Peter to take the vehicles up to the top of Pohokura Rd where hopefully our tramp would end) it was a brisk start down Boundary Stream track to get warm.

It will be 10 years this June since a major snowstorm wreaked havoc in the area, but now the bush has recovered and is looking lush and thick. Not too much bird life could be heard, but perhaps that was due to all the chatter from the group!

A quick stop for morning tea in the watery sunshine, then the drop down to Shine Falls. We didn’t check out the falls even though we had made good time; we needed to press on because this trip can be a longish one. After being given a lesson in “how to back your stock truck and trailer into a tight park” at the Shine Falls car park, it was off down Heays Access Rd and into the station driveway.

The driveway climbs up, past the airstrip and onto the lower slopes of the Maungaharuru Range, gaining all the height we lost coming down Boundary Stream track. Lunch was on a sunny grassy knoll, then it was off past the deer sheds and along a farm track. Steep bluffs that are a feature in this area were on our right, giving great views out over the Mohaka area.

It had been a while since I had done this trip and only a couple of others had been before, but in reverse, so there was a little “grey area” as to where to next. 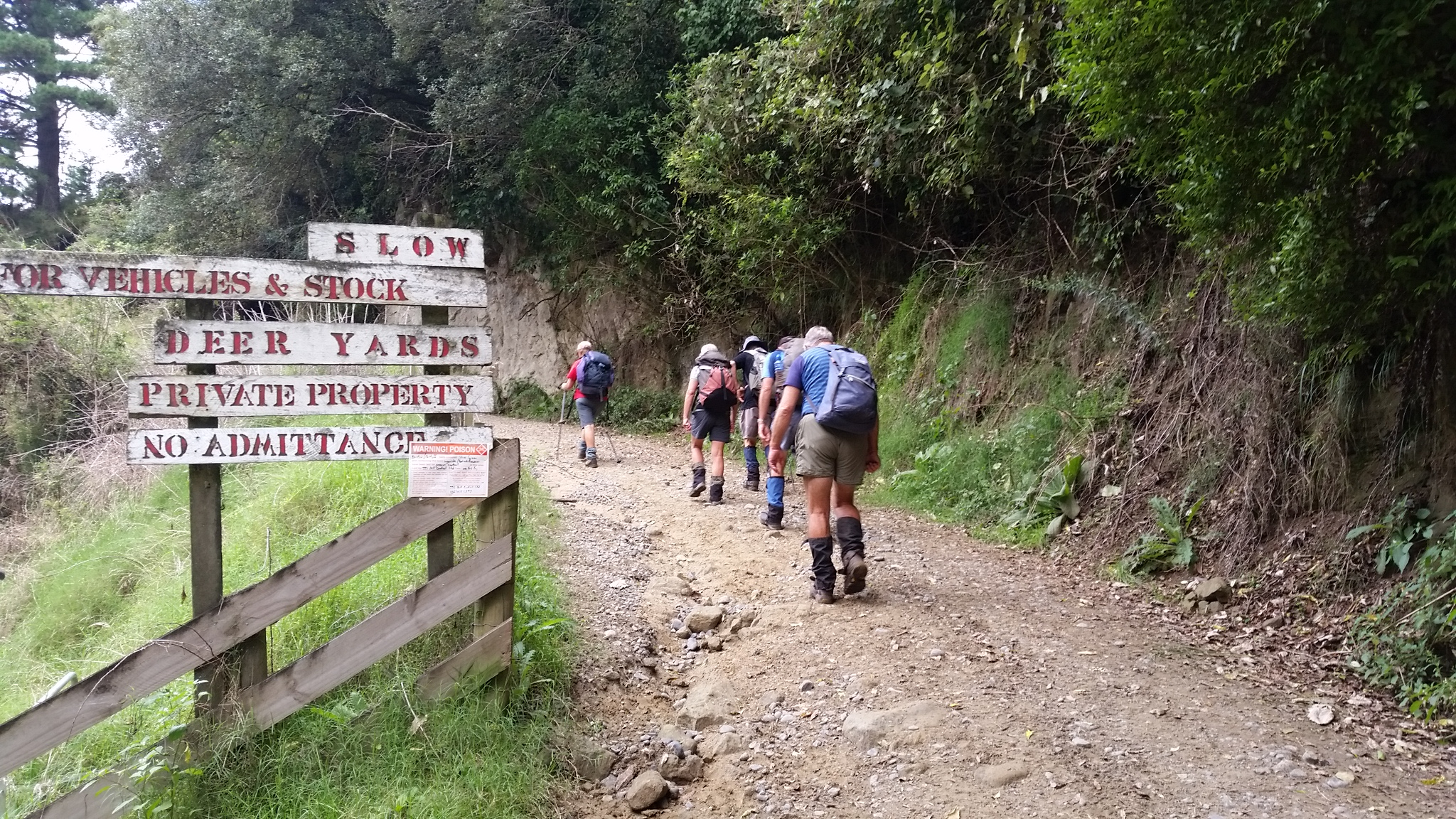 Slow: For Vehicles & Stock and Trampers

The farm track wanders and climbs through native scrub and trees, eventually coming to the old deer fences which seemed to steer us in the right direction. We stopped beside a gate which did look a bit familiar, but continued on – coming to more fences and gates that didn’t! After a steep climb up a grassy hill, we discovered we had indeed come the wrong way and that we should be “over there” on that high point with the trig on it! I had pointed out this high point at lunchtime but don’t think anybody believed that we had to go up there!

So after much deliberating, map-study and discussion, we plunged down following animal tracks through small ferns and manuka and walked out onto a track right beside that damn gate we should have gone through in the first place. From then on, it’s easy following the old farm track past a small tarn and right up onto the tops, where we were rewarded with almost 360 degree views. The skyline to the west from the Kawekas, through to the Raukumara Range, looked particularly impressive.

After a photo shot at the trig, it was a short downhill to the waiting vehicles, a cup of tea and a debrief.

It had taken seven hours – not bad even after the mix-up! And for most, an enjoyable day in some amazing country.

Aranga Hut On Saturday 14 January the tramp was changed to a loop in the Northern Ruahine Range. … END_OF_DOCUMENT_TOKEN_TO_BE_REPLACED

Aranga Hut On Saturday 14 January the tramp was changed to a loop in the Northern Ruahine Range. … END_OF_DOCUMENT_TOKEN_TO_BE_REPLACED