We left the van in the Pukahunui car park in the Whirinaki Forest Park to do the in-and-out tramp to the Upper Te Hoe Hut. Light misty rain was falling. It wasn’t long before the rain gear was donned. Why didn’t I put my leggings on, too? The overgrown track soon had us really soaked. Lesson learnt. Some of the party reached the hut while others returned earlier as they (and the weather) dictated. 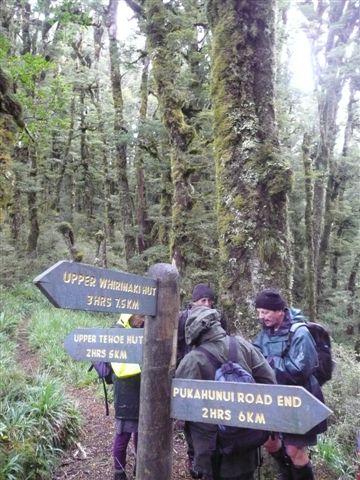 The track climbs steadily through very distinctive, even foreboding, rain forest. The misty rain added to the effect. Very old – even ancient, to my eye – gnarled moss- and lichen-covered beech trees form a dense canopy. These trees are draped with a range of epiphytes. Large mountain cabbage trees line the track, together with large patches of lush Prince of Wales Feather ferns. This forest is unique and was apparently enough to get David Bellamy excited with words like “one of the best Mesozoic plant communities remaining on Earth”. And we were there.

From the high point (1200m), the track gradually loses height as it winds around before seriously dropping down (or so I’m told) to the hut “in” the upper reaches of the Te Hoe River.

Bird life was noticeably absent. It was only back near the van that we encountered some. Maybe it was a bit too cold up higher. It certainly was on our day. The map does say “snows often in winter”.

All were back at the van by shortly after 4pm. The later ones missed out on some of the dual birthday celebrations for the two Johns, though we saved them a few treats. It was a happy way to end a great day in an interesting place.

Aranga Hut On Saturday 14 January the tramp was changed to a loop in the Northern Ruahine Range. … END_OF_DOCUMENT_TOKEN_TO_BE_REPLACED

Aranga Hut On Saturday 14 January the tramp was changed to a loop in the Northern Ruahine Range. … END_OF_DOCUMENT_TOKEN_TO_BE_REPLACED