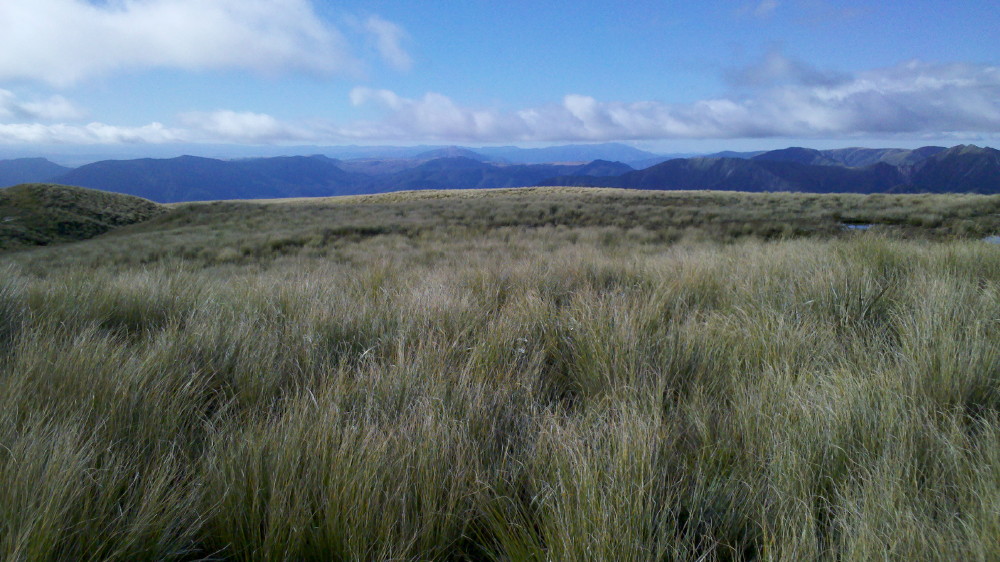 This is a magic trip to do in the Ruahine Forest Park and encompasses a superb range of fauna and scenery over a full two-day hike. We recommend it as one that has a huge variety in quite a small period of time. One minute you are at the river bed, then travelling through beech forests; then a few hours later you’re in the alpine tops of the Ruahines with tussock and alpine vegetation.

We tried to find track descriptions of this route online and the best that we could come up with was the one on the DoC website. We decided to tackle the loop in the opposite direction to the one we had read about as we had already been to the top of Colenso Trig (4hrs up and 3 hrs down) on a previous trip and knew that it would be a lovely, sedate end to the circuit. Also we figured that the steep ridge that was described as hair-raising in the description would be less hair-raising ascending than descending and it turned out we were quite right!

We would consider this a fitness-essential trip and navigation (e.g. GPS/compass) is required along the tops as there is no marked route on the top section of the Mokai Patea Range. It’s advisable to pre-programme the route into your GPS before you leave home and take a compass and topo map just in case because you can’t predict what the weather will be like on the day. The DoC website indicates that this is a two-night, three-day trip. With Crow Hut being only four hours from the Kawhatau Base, unless you are planning on doing a major meander we advise taking a tent and stopping where convenient as far along as you can get on day one.

Being Easter Weekend and the roar of the deer, we ensured that we were highly visible with hats and jackets that stood out a mile. 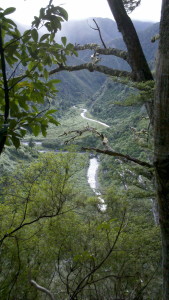 Heading up to the main range from Kawhatau cableway

Starting at the cableway just up from Kawhatau Base at 10am, we headed up the track which rises very steeply from the river bed. The track is obviously untended as there were many healthy flax bushes growing right in the middle of it for much of the climb to the first summit of the Hikurangi Range. At one part, the track had subsided and it took a little negotiating to find a secure place to plant the feet and continue on. Unfortunately with the Kawhatau Base being accessible only via the 9km walk up the Kawhatau river bed, very many travellers have been put off and so the track is in a bit of a state of disrepair.

Once you reach the first summit on the Hikurangi Range, there is a wonderful walk through the characteristic tops of the Ruahines – about 100 metres wide and of flat terrain with tussock in abundance. Twenty five minutes along the tops, you come to the fork where we turned left to descend to Crow Hut. Had we continued straight ahead, we would have arrived at McKinnon Hut by about the same time.

The descent to Crow Hut is just as steep downhill as the ascent that we had just completed, travelling through beech forests. We had heard that Crow Hut was situated in a lovely location and we were not disappointed. It is nestled in a beautiful setting by the river, assisted by the fact that the weather was stunning and it was lunchtime, a perfect opportunity to down packs and stop for a brief rest. 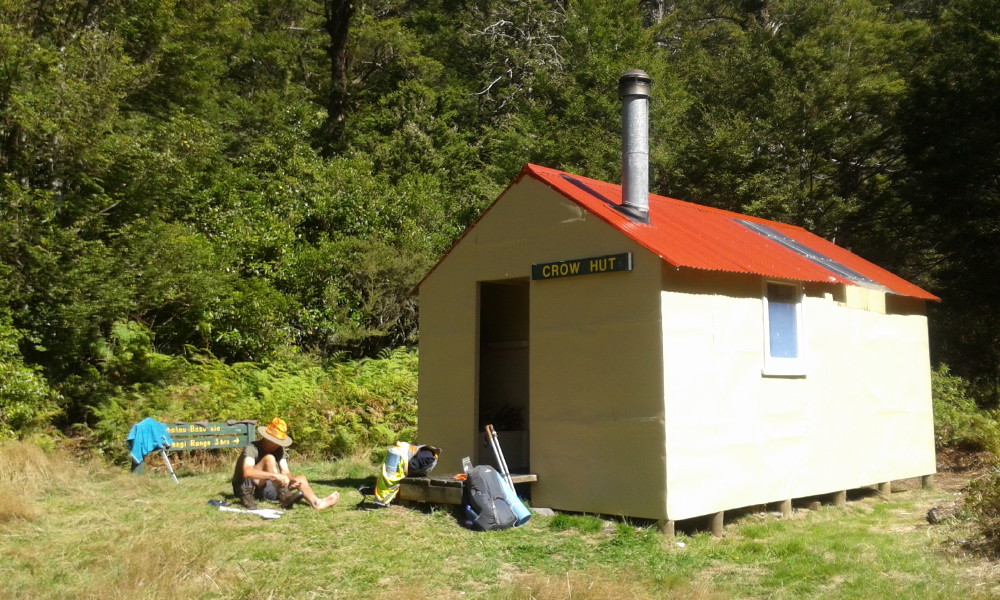 Crow Hut is in a superb location

Very shortly after leaving the magic scene of the Crow Hut and crossing the swingbridge, we walked briefly along the river bed and hung a sharp left to negotiate a small, sheer rock bluff that is better tackled upwards than coming down! There is not a lot to hang onto but this is only for a short time.

The next part of the track rises steeply through beech forest and then up a quite exposed, poled ridge that the DoC website describes as slightly hair-raising toward the Mokai Patea Range tops. Once again, this part of the circuit is far better done upward than scrambling down the tussock-lined ridge. There is quite a bit of evidence where the edge of the ridge has subsided, though the going is quite easy in that the grasses are not difficult to negotiate from pole to pole and the track is fairly well marked. Over toward the next ridge, we could make out a couple of hunters and hear the sound of a roaring stag to remind us that we were sharing the journey with others of different intent!

After some time, we arrived at the top of the Mokai Patea Range. From this point, the poled track meanders toward the right and Wakelings Hut. However, the circuit we were to take hooks a sharp left turn and this is where you need navigational skills to ensure that you head for the tops and stay on the tops. Rule of thumb, and sounds pretty obvious, is that if you are heading downwards then you are not on the tops! These are nothing like the razorback tops of the Tararuas. The unmarked walk takes a good three to four hours and we decided to make camp at about 5pm after an hour of leaving the marked route, to ensure that we were well set up with tent and food before dusk. 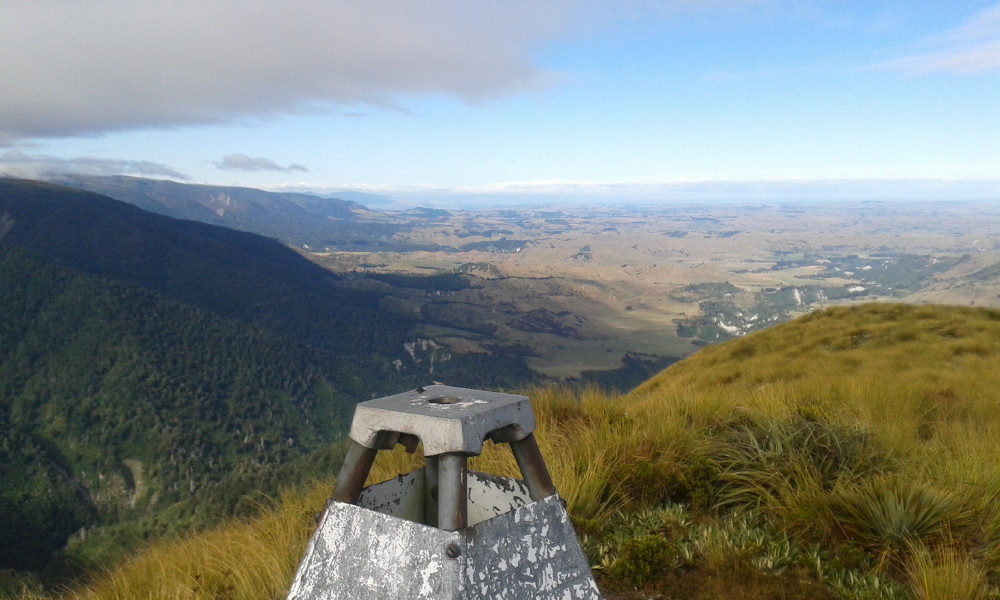 The view west from Colenso Trig

Luckily the weather was superb and the view was stunning. As we weren’t certain that the weather would stay stunning, we chose to camp off the tops in a gully – in fact, on a bog, as this was the only flat piece of ground off the tops and close to some water which we boiled solidly to stock up for the next day. To keep out the inevitable damp, we placed our bedrolls on the ground under the tent and our raincoats inside the tent and beneath our sleeping bags. This worked out beautifully and we enjoyed a luxurious night’s sleep on a soft-as platform. We heard deer roaring at about 3am.

Next morning was a white-out and we headed back up to the tops to continue our travels. Walking poles were very handy for balance here; you couldn’t see the ground in between the tussocks and there were plenty of little bog holes filled with water to stumble onto (and into) if not careful! We caught up with another hunter an hour on; he told us we stood out like Christmas trees with our hi-viz garb! He also gave us the lowdown on the number of hunters in the area. They had had no luck so far but the day was still young.

Another two or so hours along, we finally sighted the Colenso Trig and knew that we were almost there, arriving just in time for morning tea. With the mist having burnt off, there were stunning 360 degree views of the surrounding ranges and way over to Ruapehu. Magnificent scenery, and miniature alpine flowers and mosses galore.

From the trig, it was a simple descent down Mt Colenso and back to the Kawhatau Base.

Due to farm management issues, you must contact the landowner to make prior arrangements to cross private land at Rangitane Road-end. The gate will be locked so you will not be able to enter if you have not contacted the landowners. Access is now by walking up the Kawhatau River from the Rangitane road bridge across the Kawhatau River. Please note this route may not be accessible during times of high river flow.

About the author: Carol Croft and her partner Tom Wakelin are members of the Gisborne Tramping Club; however, this was a private tramp in the Ruahine Forest Park. Many thanks for your contribution, Carol.