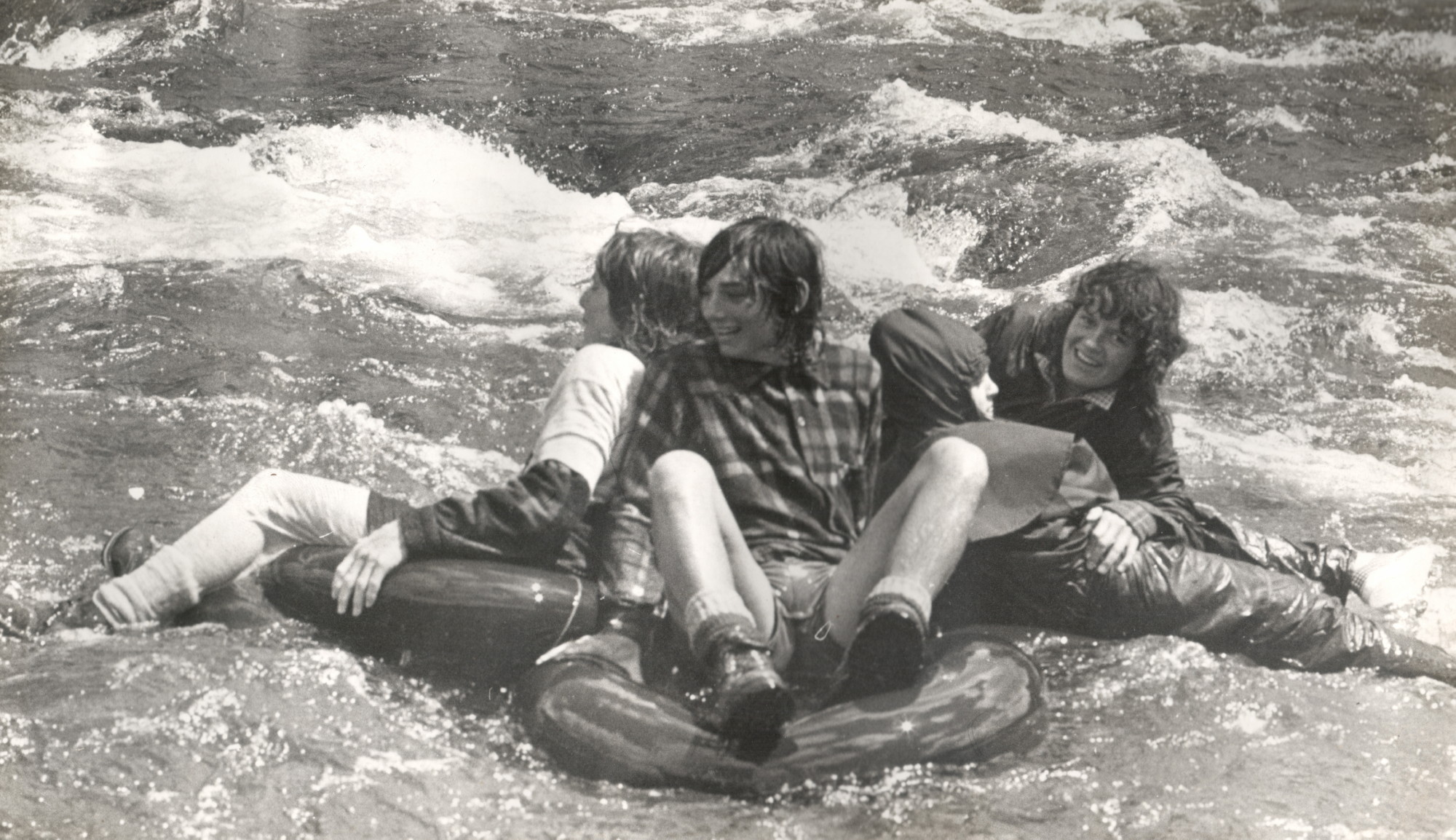 Warning: If you tried this today, Health & Safety, OSH, SAR and every nanny in the state would be down on you like a ton of bricks. Our dare-devil trampers tackle the mighty Mohaka without any buoyancy aids, wet suits or helmets!

Many drops of sweat had fallen on to the sun-baked dust of the Puketitiri Hot Springs road on the way in but even so, the leader at least wasn’t looking forward with wholly pleasant anticipations to the return by the watery route.

Mike Roberts and Mary Madore toughing it out in the rapids

Up here, the Mohaka follows the pattern of so many other high-country rivers, with rapids descending into deep pools hard against cliffs on one side of the valley and then the other, but because it has an unusually steep gradient for a river of its size, there are also quite fierce rapids in many of the straight stretches in between. It carries a large volume of water and the boulders are up to the size of a car.

The thought of a large group including several ‘first-timers’ setting out to float down there on lilos or inner-tubes brings all sorts of uneasy feelings: might someone be smashed against rocks, or impaled on a snag, or catch a foot between boulders and be held under by the current?

The test began just before midday. The river was running high above normal summer level, so the rapids looked worse but weren’t in fact as bumpy as they could have been.

Off we went, the first rapid not too bad, then the second, with a huge log sticking out halfway down, no hope of stopping; people going under or over or colliding with it; onwards into white water heaped up around a boulder. 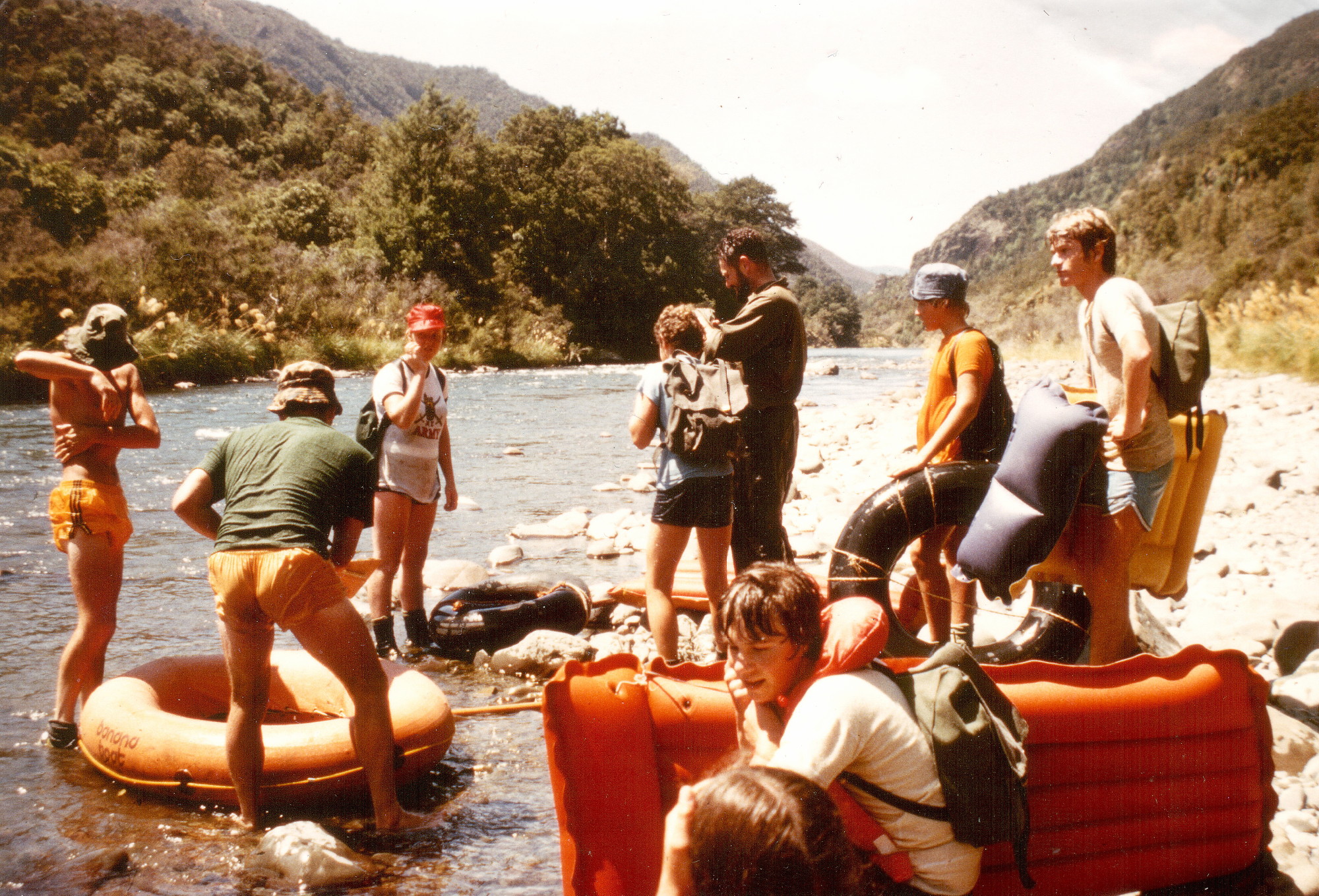 Over goes the lilo, elbow bashed on a rock, hip hits two more one after the other; speeding down feet first now, put boots against cliff to push clear of it, round twice in whirlpool, paddle out of that, glance back to see the large tube with three people on it ride up on rocks and tip over; check to see that three heads come to surface, then frantic efforts to clamber back on to lilo and get lined up for next rapid.

Waves more than a metre high in this one; lilo bucks over the first few then dives straight through the next, just as you’re trying to take a breath; coughing and spluttering, eyes full of water, blurred glimpse of scrub on bank rushing past, roaring noise ahead and spray flying up; hurtle over a boulder-bank into a narrow pool at base of cliff; oops, nasty cross-currents here, lilo wrenched from under you, hang on desperately; down you go, lilo and all, amongst the sunlit bubbles, then rise up right underneath someone else and overturn them; sorry…

Not that it matters too much now, as people in front are climbing out on to warm dry boulders! Feels strange to be walking upright again. 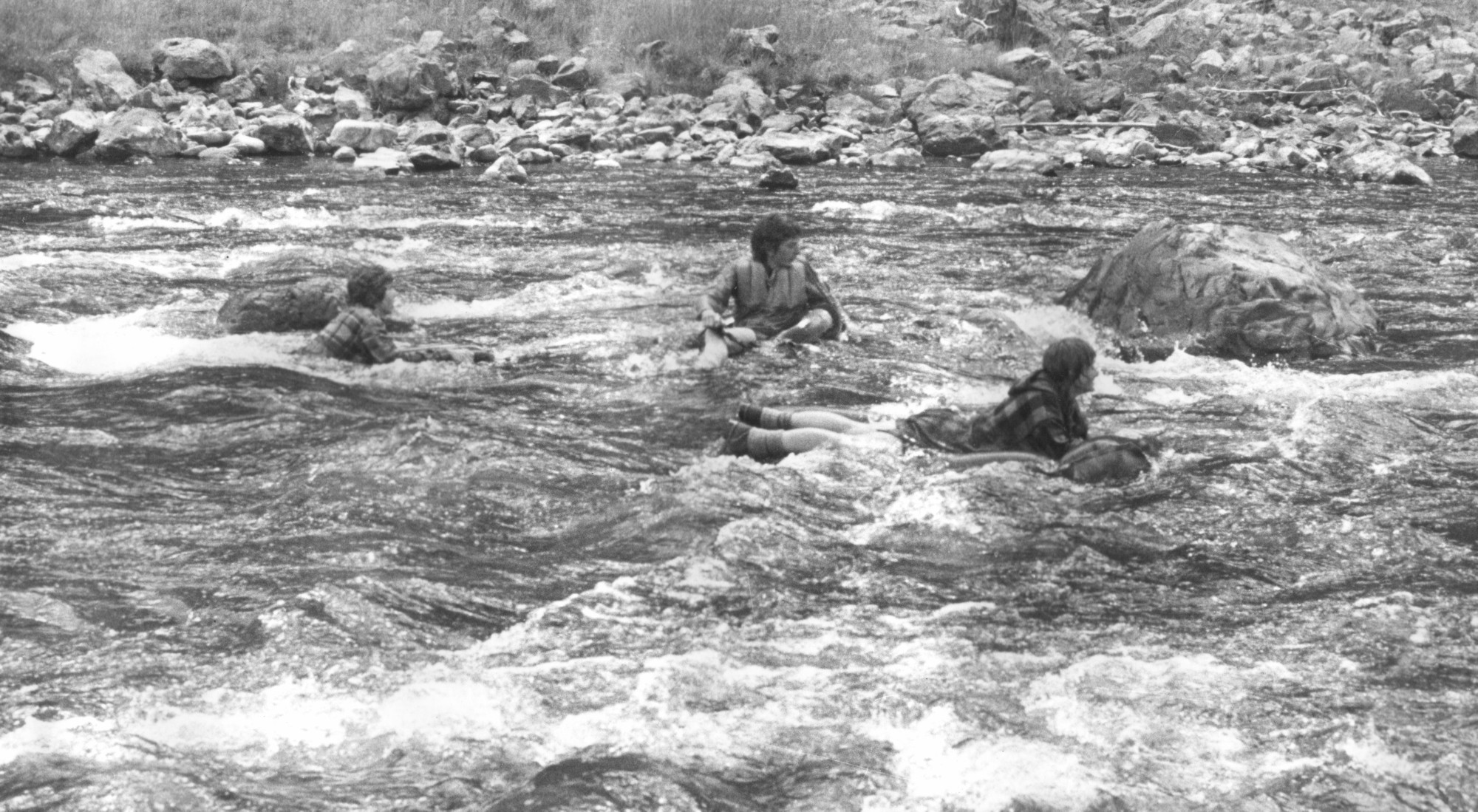 So that the party wouldn’t become too strung out along hundreds of metres of river, the front-runners stopped every five minutes or so and everyone had a five- or ten-minute rest. When we came to a big rapid, the gradual right-hand curve with a couple of hundred metres of increasing turbulence ending in a tumble over boulders into a narrow chute, the leader thought he’d be first to try it, but halfway down shot over a boulder and stopped on uncertain footing in the sheltered water below it.

Next came Alison, already off her lilo and bumping on rocks. I grab and try to help her back onto lilo, but current is too strong and it whirls her away. Others hurtle past; glimpses of arms, legs, lilos, packs or tubes momentarily showing out of foam as the torrent sweeps around the corner. Then there is no alternative but to fall on top of lilo and face it oneself. 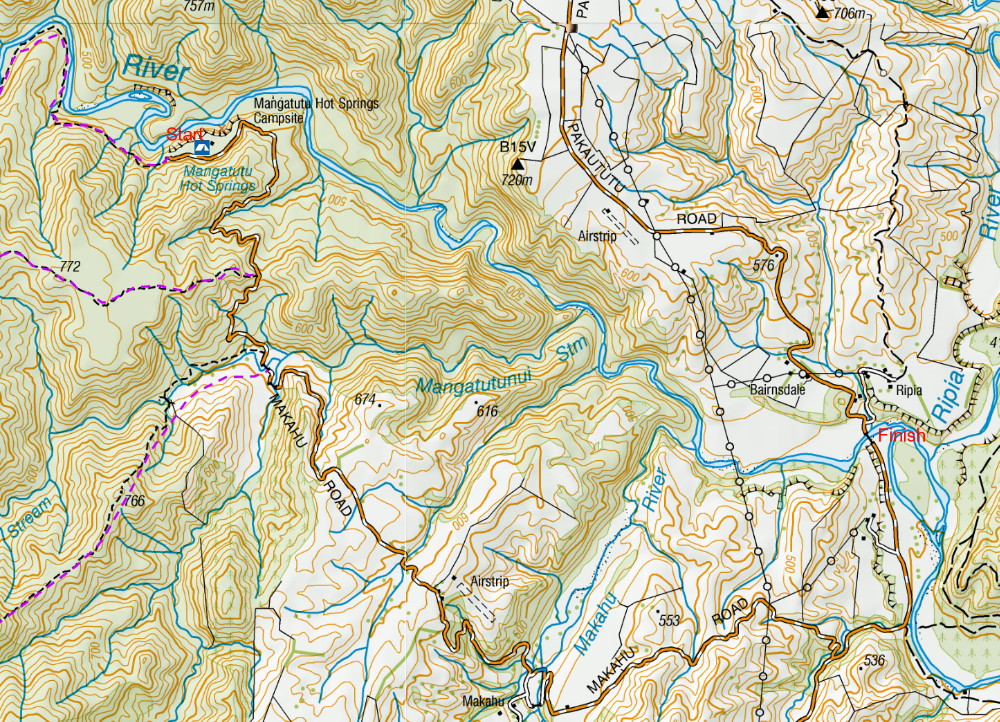 Downstream on the shingle flat, Anne opened her pack and brought out dry matches so while the billy boiled, most of the boys tried their luck in a big whirlpool. The ‘triple somersaults’ which were Alan Lee’s impression of the big rapid, and the loss of his favourite tramping hat, certainly hadn’t upset his sense of balance. With only a long manuka stick for a paddle, first in Chris Sole’s ‘Banana Boat’ and then on a tube, he made us envious with a demonstration of what his canoeing experiences had taught him, and soon the others were also learning how to use the currents to take them wherever they wanted to go.

The second half of the journey, reaching Pakaututu Bridge just before 5pm, was still thrilling but more relaxed. With everyone safe, the day which began with apprehensions ended with many cuts and bruises, but also with many happy memories.

One thing’s for certain: none of that party will ever underestimate the power of a river, but if they ever do find themselves suddenly swept away in one, they’ll know a lot more about how to avoid panic and get out alive!