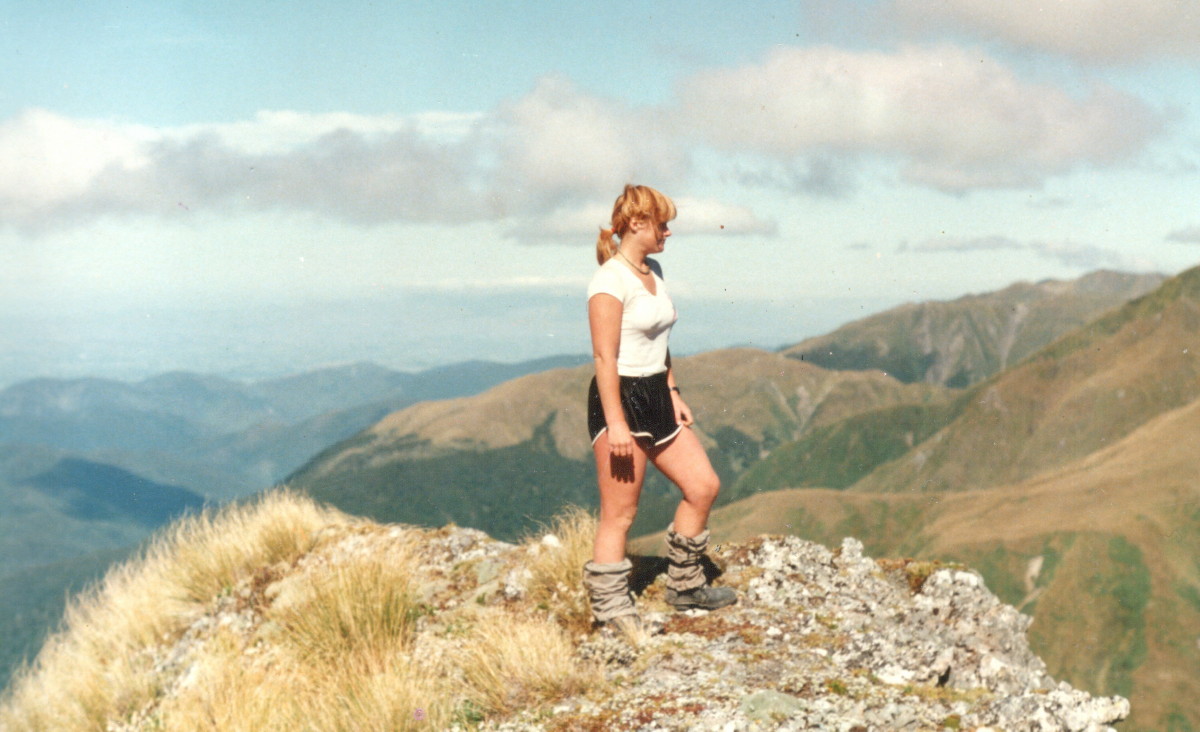 It didn’t take more than a few last-minute phone calls to have Murray, Cathy, Carl and myself heading off to the Tararuas in my old ‘Trusty Rusty’ Escort van. We left Napier at 8am on Friday and half an hour this side of Masterton, turned off into Kiriwhakapapa Road and into the forest park. We started walking at 11.30 in pouring rain, wondering if we had done the right thing by coming. 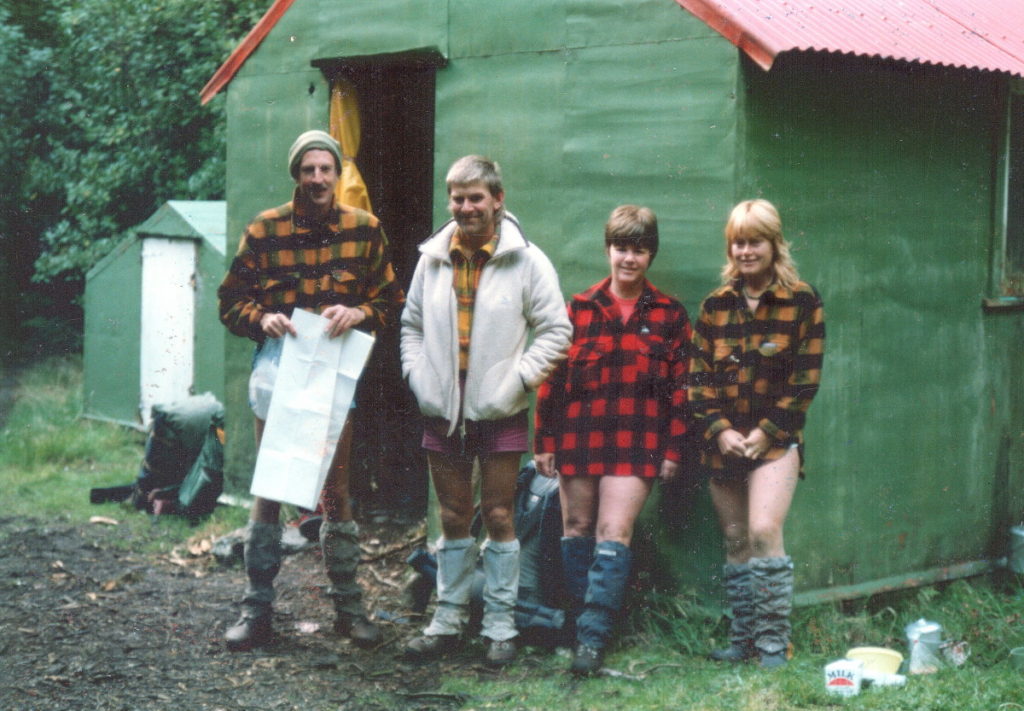 It took us three hours to reach the first hut, Cow Creek, travelling through ‘undulating’ beech forest; well, that was Murray’s description of the terrain. In fact, it was bloody hard going, straight up one ridge, straight down, then up again – typical Tararua country. Being a long weekend, we had expected the huts to be full, so carried tents with us. There were already six in Cow Creek Hut when we arrived but Cathy and I opted for floor space while Murray and Carl camped out. 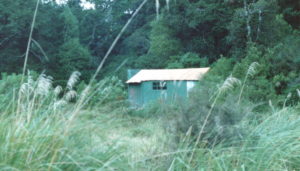 On Saturday morning, we were up at the crack of dawn, eager to get up on the tops… but a pity we have to climb up there! We headed straight up the ridge behind the hut for two hours until we reached the bush-line, only to be disappointed to find the wind just too strong for our planned route along the tops and down to Mitre Flats; so it was back down to Cow Creek. Then another three and three quarter hours along the river track to Mitre Flats. It proved a little frustrating as we kept getting up onto the high water track then dropping down to the river again, and we were absolutely ‘flopped’ by this time. It had been a long day with our little excursion to the tops. 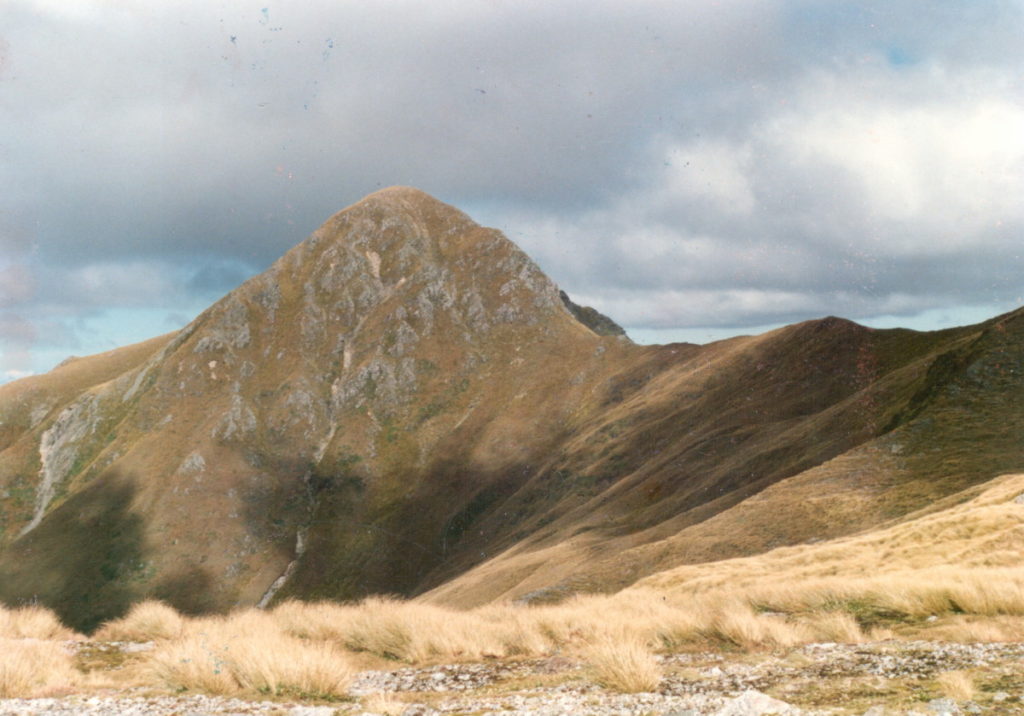 DoC is in the process of building a new Mitre Flats Hut, one of these huge 20-sleepers (squeeze 40) jobs, so I suppose the old one will be demolished. It was with relief that we finally arrived at 5pm to find the hut full of two ‘Mother Hubbards’ and about ten kids! But the two farmers’ wives had their broods well under control; in fact, they were the best-behaved group of kids I’ve been graced to share a hut with for a long time; we really enjoyed their company. 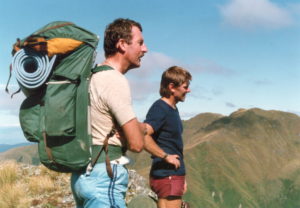 Murray White and Carl Joyce on the Tararua tops

On the Sunday morning, Cathy had decided that, rather than risk another trip to the tops and possible return, she would head straight up the river track, the way we came in. After we had said our goodbyes to Cathy and the Mother Hubbards with their broods, Murray, Carl and I headed straight for the tops, to find there wasn’t even a whisper of wind.

We could not believe our luck. It was one of those days you think of when people ask ‘Why?’ It was crystal clear on the tops and we could see for miles. It took us seven hours all told from Mitre Flats up onto Peggy’s Peak, over Mitre (the highest point in the Tararuas) along Table Top Ridge, where we stopped for lunch by a tarn and savoured the experience, then made our way down to Cow Creek where we met Cathy and stayed another night.

On Monday, we walked back to the cars the way we had come in, but the memory of those few hours on the tops will stick in my mind for a long time, and keep me lugging my pack up a few more hills yet. It was a great trip, thanks to my companions, Murray White, Cathy Hamilton and Carl Joyce.

Aranga Hut On Saturday 14 January the tramp was changed to a loop in the Northern Ruahine Range. … END_OF_DOCUMENT_TOKEN_TO_BE_REPLACED

Aranga Hut On Saturday 14 January the tramp was changed to a loop in the Northern Ruahine Range. … END_OF_DOCUMENT_TOKEN_TO_BE_REPLACED