The weather forecast was for rain clearing and a westerly wind. Well, they were spot on again, although the mention of a gale would have been helpful. With ten trampers on board, the van arrived at the end of Glenny Road (thanks to the farmer allowing access) in good time. Eight set off over farmland with the bivvy as a target for the day, while John and Vic headed for Gold Creek Hut.

The track starts very steeply up a craggy ridge at the junction of Gold Creek and the Makaroro River (alt 500m). Both had low water flows. A DoC sign advises that time to the bivvy is 3.5 hours. There are many snow-damaged trees in the lower part of the track and fallen branches on the track caused several detours or the need to clamber over the debris. At least it took your mind off the steep gradient. 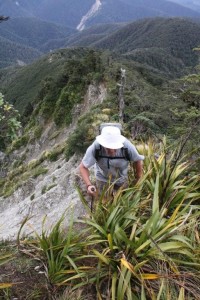 The bivvy was reached just after midday by everyone, in just over three hours (alt. approx. 1300m). The final section of the track required careful negotiation along the top edge of a large slip. The thought of a fast descent to the bottom was a good deterrent to being over-confident.

A few keen individuals ventured further up to see the views from the tops. That was well worth the extra effort but the cold gale-force wind didn’t allow for staying too long. 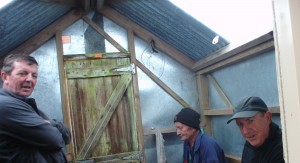 Lunch was inside the bivvy.

The views were tremendous, which made the effort worthwhile. The return down the track was a lot easier and was uneventful apart from the scribe suffering cramp (thankfully not a pulled muscle as first thought). We arrived at the river six hours after the start. From there, it was a return trip over the farmland to the van.

John and Vic had also achieved their objective, so it was a very successful day.

A year in the life of a GuideOn June 3, Graham Leech gave a presentation at the club meeting … END_OF_DOCUMENT_TOKEN_TO_BE_REPLACED

A year in the life of a GuideOn June 3, Graham Leech gave a presentation at the club meeting … END_OF_DOCUMENT_TOKEN_TO_BE_REPLACED