Our grateful thanks to Ray for enabling us to have dry feet from the start. His wagon was able to ford the Makaroro River and we parked at the bottom of the Yeomans Track. The blackberries were numerous, and we all ate a few. 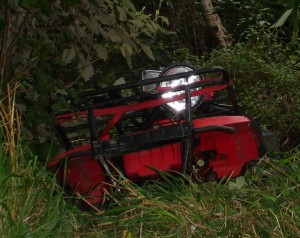 After heading up the track, we came across an ATV bike that had slid off just before the vehicle obstacle. We speculated that its rider had been turning around but ended up down the bank.

We were caught up by the day party also going up the Parks Peak track, but turning off to Barlow’s Hut, and then out down the river. Ray and Murray decided to turn off and take the track to the Gold Creek junction, and go up-river to Barlow’s Hut for the night. Paul, Ted and I were aiming for Upper Makaroro Hut. The day was overcast but extremely warm. The day party was led by Colin McNatty and he was closely followed by Murray White and John Russell. Colin and Murray are now the proud users of ‘sticks’. Something about old age was mentioned, but we soon began to describe them as the ‘stick men’. We also noticed that some others in the day group were also using ‘sticks’. These used to be rare in the club, but I can see that views are changing.

We climbed the hill, passing and then being passed (while we took a food break) by the day party. We reached the Barlow’s Hut turn-off, and said goodbye to the ‘stick men’. They waited for the rest of their party to catch up, and we headed further uphill.

This hill seemed to be getting longer and just after noon, we had the last hump in sight but decided to stop for lunch. It was during lunch that we changed our plan and aimed for Barlow’s Hut instead of Upper Makaroro. We left our packs on the track and made a quick visit to Parks Peak, as neither Ted nor Paul had seen the new hut. The wind was blowing across the tops above the bush-lined track, and the temperature had been dropping steadily. When we arrived at the hut, a hunter had the Wagoner fire going full bore. He and another mate had arrived from Sentry Box, and were warming themselves up. It was too windy for hunting, they said; maybe tomorrow would be better.

We filled our water bottles, and made our way back, passing the turn-off to Upper Makaroro Hut (1h 30m). We picked up our packs and walked back down to the Barlow’s Hut junction and then down to Barlow’s Hut. Estimated time 2h 30m, with arrival time near 4pm. We did not mind that much, as it was downhill. But what we all found was that the steep track with a heavy pack is also hard work. The last section before you reach the bottom is especially steep, and you need to hang onto the bush when going down, to stop yourself from tipping over downhill. 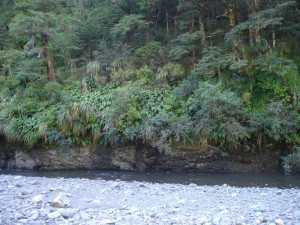 On arrival at the river, the cold water was soothing to very hot feet. We surprised Ray and Murray, and were surprised also to find eight other hunters also staying at the hut. Ray and Murray had prepared beds for themselves under the tree canopy near the hut. In the event, a party of three hunters arriving back in the late afternoon decided that there were too many in the hut for them, there were no deer to be had, and so they decided to leave. That left a party of five hunters and us five. Murray, Paul and I decided to sleep outside, and not be disturbed by snoring. After liquid refreshment, story-telling, food and a fire in the ‘Little Corker’, it was bedtime. The sound of the morepork was just like being at home for me…

The hunters left in the early hours (another reason not to sleep inside), but we had promised ourselves a lie-in; up at 7.30, and ready for the walk out, which we started just before nine. The day was bright and sunny. We stopped to admire all the swimming pools on the way down the river, looking for fish but only seeing one. Their numbers are reducing markedly, probably due to increased access by four-wheel drive vehicles for some distance up from the ford.

We botanised the moss and lichen on the rocks, using Paul’s mini-magnifying apparatus. The bird life in the bush on the track up to the road end was pleasing to hear. A couple of lacebark (Hoheria Angustifolia) trees’ white flowers were easily spotted from the car park when we arrived back after a leisurely walk out.

A drink and a shared bowl of chips at the Chook and Philly ended a surprisingly challenging first day and a second very relaxed day – a good combination.

PS. The ATV had gone…. We think that another ATV had towed it up back onto the track.

As we approached the Ruahines, the tops were in the cloud and gentle raindrops fell on the windscreen. We set off across the river shortly before 9am, ate a few blackberries and headed off along the Yeoman track before turning up the Parks Peak track. Lots of stops allowed the weekend group to keep passing us as Ted, Paul and Julia set a good pace with their heavier weekend packs. After about two hours and a morning tea stop and a wait to regroup (the faster ones met up with three very young hunters going on up towards Parks Peak), we turned left and started the long, steep descent down to the river.

Somewhere along the way, we had lunch at 12.15 and everyone admired Murray White’s huge hokey pokey Pak ‘N Save cookies. John somehow managed to convince Murray to give him a whole one. After lots of slipping and sliding and a few bum landings, we reached the river and meandered down to Barlow’s Hut around 2pm where Murray Goss and Ray Slavin had just arrived and made camp in the bushes. We all admired Murray’s huge trout, about to be skinned and filleted and fried gently in a batter as their pre-dinner snack.

The walk back down the river to the car park took about two hours, the water level being low and a four-wheel drive track making it relatively easy walking. But some of us ladies dragged the chain a bit for the faster walking men, who sat on logs and waited patiently. We arrived at the car park about 4.45 and were back in Napier by 6.30, and home just in time for Country Calendar and to make a huge apple crumble ready for everyone Colin had invited for pudding. But no one turned up, so I’m still eating it!

Sparrowhawk bivvy, Ruahine Forest Park, Saturday 6 August 2022 Banner Photo: The view east, towards the Wakararas and beyond On a beautiful … END_OF_DOCUMENT_TOKEN_TO_BE_REPLACED

Prologue: The author was on the Whirinaki tramp, reported on this website under the headline 'We observe a mock turtle and the rodent of Upper Te … END_OF_DOCUMENT_TOKEN_TO_BE_REPLACED

Ruahine User Group A meeting was held on Monday 25 July, in the NZDA rooms in Dannevirke.  Julia … END_OF_DOCUMENT_TOKEN_TO_BE_REPLACED

Ruahine User Group A meeting was held on Monday 25 July, in the NZDA rooms in Dannevirke.  Julia … END_OF_DOCUMENT_TOKEN_TO_BE_REPLACED

Ruahine User Group A meeting was held on Monday 25 July, in the NZDA rooms in Dannevirke.  Julia … END_OF_DOCUMENT_TOKEN_TO_BE_REPLACED

Ruahine User Group A meeting was held on Monday 25 July, in the NZDA rooms in Dannevirke.  Julia … END_OF_DOCUMENT_TOKEN_TO_BE_REPLACED