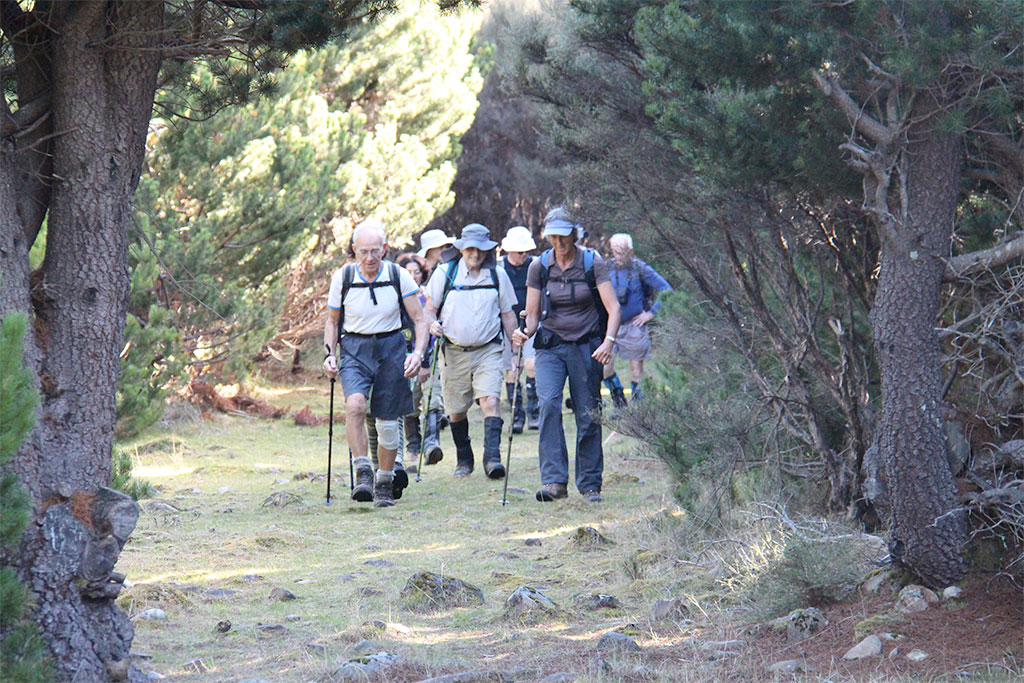 On the trip list, today’s tramp was rated easy. As it turned out, it was anything but!

The walk along Black Birch Range and down to Lotkow Road was an easy stroll, diverting to check out Black Birch Bivvy on the way.

We wanted to find the track that runs along the ridge between the road and Jap Creek, which we had done in the past but is now not maintained. Late last year, we found the track but lost it somewhere in the scrub and had to abandon the hunt, so we set out determined to solve the mystery.

Picking up the track off the road is easy enough, through the pinus contorta forest and following the occasional orange marker no doubt left by a hunter. We passed the high point of 820m and – as it was noon – decided to have lunch. 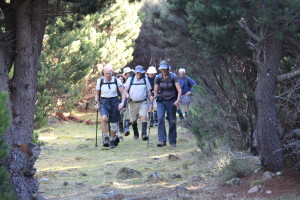 An easy stroll amongst the pinus contorta

Moving on, we left the pines and started descending, pushing our way through prickly, scrubby vegetation to a clearing looking over towards the Donald River. It was about now that we realised we had made the same mistake as last time!

Somewhere back in those trees, the track veers slightly left and we had carried on down the ridge. Out came everyones GPS and after much deliberation we decided we’d have to bush bash our way over until we hit the track we should have been on.

Well, that was easier said than done especially with a biggish party of 13. There was lots of calling and yelling out, people going in all directions, regrouping, stopping to check the GPS, then finally after I don’t know how long we hit the track and breathed a sigh of relief. Thanks must go to Tony here for the GPS tracker on his phone, which told us exactly where we were.

It was now 3pm and we realised there was still another 200 metres of downhill left to go. Here the track is very overgrown, making progress slow. Then, yeah, we spotted a couple of pink ribbons marking the sharp left hand turn which takes us down to the creek. This track was hard to follow in places but Paul and Hilary were in front, blazing the way. A few metres downstream, we crossed over and it was a short walk up the other side and finally onto the Lotkow – Lawrence track. It was high fives all round, and time to high-tail it out of there!

It was 5pm when we emerged out of the gloom into the Lotkow Road car park. What a day! Lots of spilt blood, lost glasses and cameras (all which were found) but we did find the track. The only thing is, we still have to find the bit where we went wrong. Any volunteers?

Aranga Hut On Saturday 14 January the tramp was changed to a loop in the Northern Ruahine Range. … END_OF_DOCUMENT_TOKEN_TO_BE_REPLACED

Aranga Hut On Saturday 14 January the tramp was changed to a loop in the Northern Ruahine Range. … END_OF_DOCUMENT_TOKEN_TO_BE_REPLACED