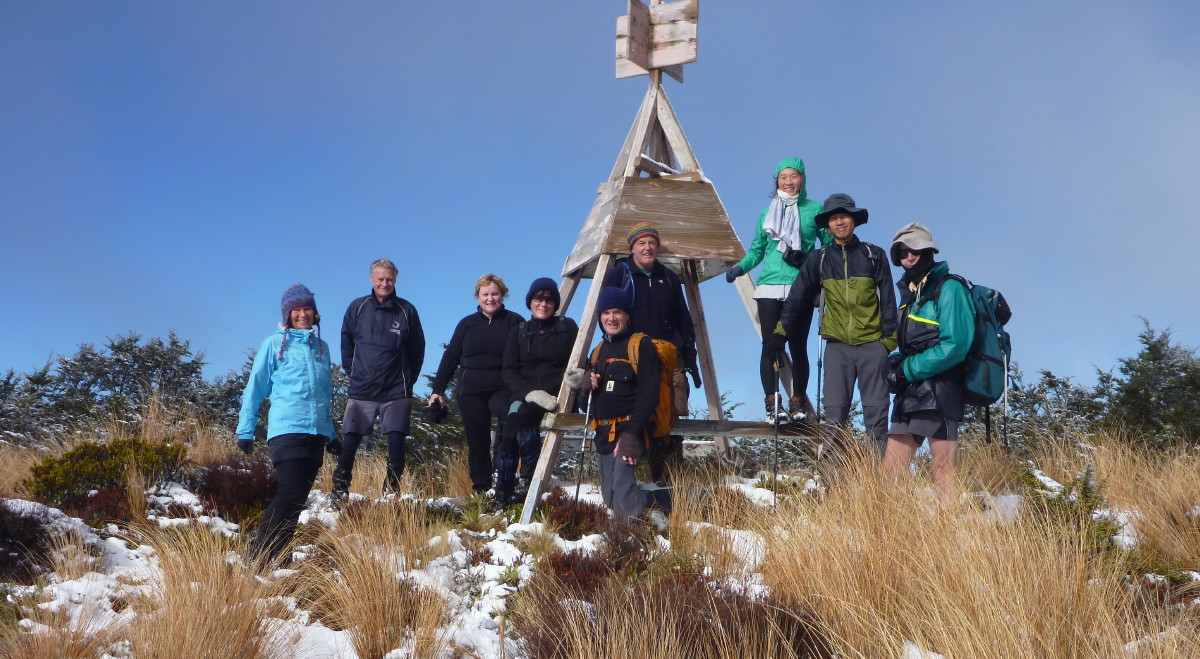 What a wonderful tramping day in the Kaweka Forest Park. We started from the Gentle Annie and made our way up through an old track which is no longer maintained.

Once above the bushline, the tussock grasses had frozen, and the leading tramper was the unlucky one to fight the way through. When frozen, the grass fronds stick together and extra strength was required to walk through them. We soon encountered the snow which, on the shadier slopes and in parts of the bush, had not yet melted. It was a great day to be out, as long as you were out of the wind and in the sunshine. 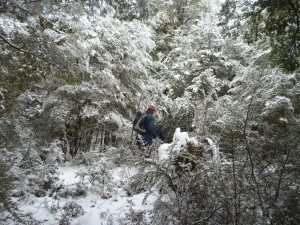 In places, the track is through bush

On occasion we lost the old track, and then we found it again. When it disappeared into the bush, it became more difficult as old entrance ways have overgrown. Nine of us reached Te Iringa trig, and we stopped to admire the views and take the group selfie.

We could not stand around for too long, although the sun was warming. We continued on, track-finding, and made our way to the cairns which mark a change of direction. The sharp-eyed amongst us spotted four deer that ran and then stood still. They were difficult to spot, their coats matching the tussock and dracophylum. A lot of deer squealing was heard. 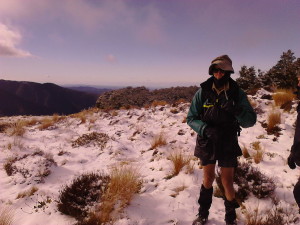 The tussock tops track, in snow

From this cairn, if you head downhill keeping to the edge, you reach a clump of trees and clay pans. From here, keeping to the bushline, you can find Jack Roberts hut. This is a private hut (it’s on Timahanga Station) and permission is required to be in the area. It is used by hunters and is a makeshift structure. Les decided to go and see it, as he had not been there since his young hunting days.

The rest of us decided against that, because time was not on our side. In winter, the tramping is slower and the colder afternoons are not conducive. We lunched in the sun and lee of the wind with views down to the silvery Ngaruroro River snaking its way through the steep Kaweka Ranges.

Making our way back was easier (excepting one spot), following our own footprints, and we were back at the vehicles by around 3pm. A great day for all, even for those who never made it to the trig.