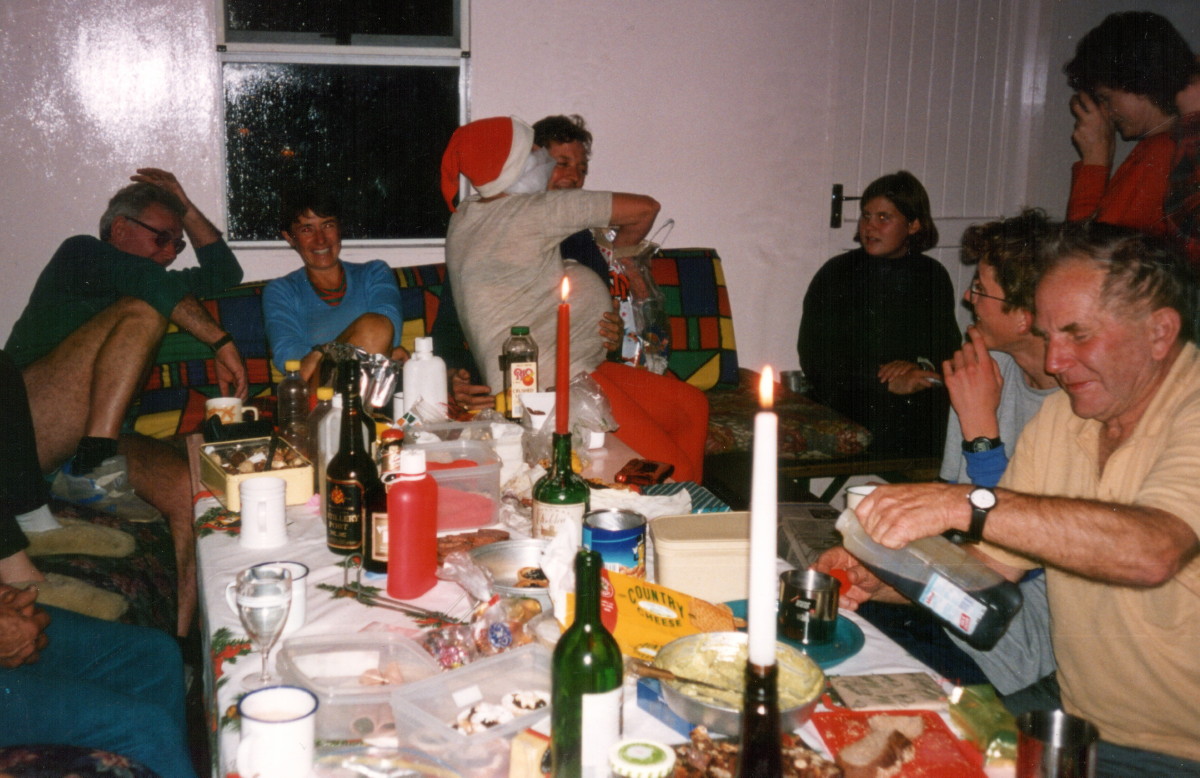 Leaving the airport layby about 7.10am, a group of 19 set off up the Napier Taupo Road for the Whirinaki Forest. On arriving at the car park, we found the day trippers preparing to leave on their excursion.

Our packs were loaded with Christmas goodies and a piece of firewood each, as we set off down the track. Half a dozen were carrying branches of a pine tree which we would later re-assemble with full honours as our Christmas tree. 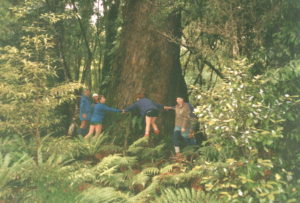 The walk in was very pleasant – the sun shining down between the tall trees and the native birds flying and singing way up in the tops.

First arrivals at Central Whirinaki Hut were there by about 11.45am with the last in by 12.30. After lighting the fire, assembling and decorating the tree, blowing up dozens of balloons which we strung across the hut and having some lunch, a group of us went for a walk to find a large beech tree discovered during the last solstice three years ago. The stories of how many bodies it took to surround this ‘giant’ varied, but at last the monster tree appeared and it took seven of us to completely circle the trunk with outstretched arms. I guess it hadn’t grown that much in three years!

We proceeded up the ridge until it was decided it was time to head back towards the hut. We sidled down the ridge and, finding a small stream, well-used by deer, followed it back to the main track. 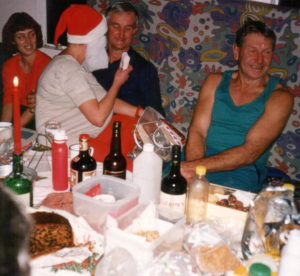 The bulge is evident

Back at the hut, it was time to get out all those Christmas goodies we had so carefully carried in and lay them on the table. What a selection. Our last party-goer arrived about 4pm, bringing more goodies to add to our banquet. A young couple from Tauranga arrived about 4.30 and were quite astounded to find the hut full of Christmas merrymakers.

Father Christmas arrived to the tune of Jingle Bells and everyone received a visit from this jovial character. One tramper, giving a rather vigorous hug, made poor old Father Christmas lose the tummy bulge with a bang. Another balloon soon had the bump restored. Before leaving us, Santa had a dance around the fire with most of the male members of our party. Rather unfair, I think – some of us ladies might have liked a dance too, Santa!

A look at the glow worms for some and then most of us were in bed by 9pm. There was much bumping, thumping and talking during the night as one tramper in particular seemed to have problems staying in his bed on the floor and another fell out of his bunk. 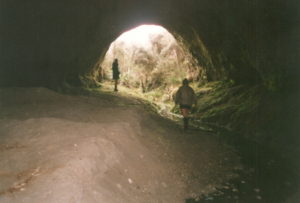 By morning everyone seemed refreshed and, after breakfast and cleaning up the hut, we set off back up the track to the cars. Everyone was out by 12.30 just as the drizzle started. It was decided to visit a cave on the way out. A handful of brave souls crossed a rather cold river to be rewarded by a huge cave opening in the side of the hill. Inside, we walked and crawled up two tunnels, each following a small underground water system, until the tunnels became too small for further exploration. Back across the river to dry off our cold wet feet and put on dry clothes, we then headed for the summit for a hot cuppa and home.

A good weekend – the Central Whirinaki track has to be one of the nicest short tramps I have been on and it was really great to see and hear the native birds, particularly as we ambled our way out on Sunday. It was also good to see a lot of young trees (particularly rimu and miro) on our short excursion off the track on Saturday afternoon. Thanks to all those who provided transport to make this an enjoyable weekend.

Twelve club members left Napier on a showery Saturday morning, in four vehicles, heading for the Whirinaki Forest. The weather cleared as we got closer to our destination, but our progress was slowed considerably when we had to clear a pine tree lying across the road. This tree took us an hour to clear and there were several other smaller trees and branches across the access roads. 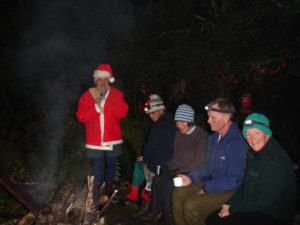 Father Christmas at the campfire

There was plenty of fresh snow lying around and we could only get as far as the corner of Pine Milling Road, where we had a meeting. The day party of six decided to walk in to the Central Track and the weekend party would do the same. We all had lunch together, in a sunny position on the side of the road. The day trip decided to walk back to the cars and the weekenders plodded on through plenty of snow to the Plateau car park.

We decided to head for Central Whirinaki Hut, because of easier access after recent heavy snow. We very soon realised that we had a lot of clearing and bush-bashing to do! We kept going though, assuming that the damage to the forest and track would ease as we got to the lower track, which wouldn’t have had so much snow. We reached our ‘point of no return’ and decided to press on. But by about 4 pm, we had only reached the first bridge and the going was still very tough. So the decision was made to set up camp at a small campsite, in front of the cave, while we had some daylight left. 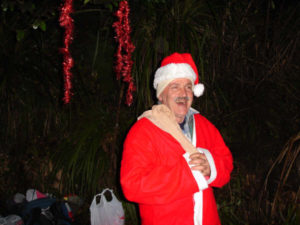 Father Christmas still visited us at the campsite, note the tinsel in the trees

The usual mid-Winter Christmas snacks and drinks were enjoyed, in front of a roaring campfire. The night was very fine, clear and settled. ‘Father Christmas’ made his appearance and distributed gifts; but it wasn’t long before we all settled into our sleeping bags, with plenty of clothes on, to face a cold night of broken sleep. We were up early of course and while eating our breakfast in front of the fire, several blue ducks were playing together in the river. Our journey out was uneventful, as it was a repeat of our trek in the day before, but we did hear two kakariki chirping away, though we couldn’t see them.

We reached the cars before two o’clock, changed into dry clothes and were soon on our way home, via hot drinks at the Te Haroto summit cafe. Personally I enjoyed the weekend, but judging by some comment, others may not have been so happy!

Contents: NTC AGM is on Thursday May 5th. There will be supper after the meeting. Club Meeting … END_OF_DOCUMENT_TOKEN_TO_BE_REPLACED

Contents: NTC AGM is on Thursday May 5th. There will be supper after the meeting. Club Meeting … END_OF_DOCUMENT_TOKEN_TO_BE_REPLACED