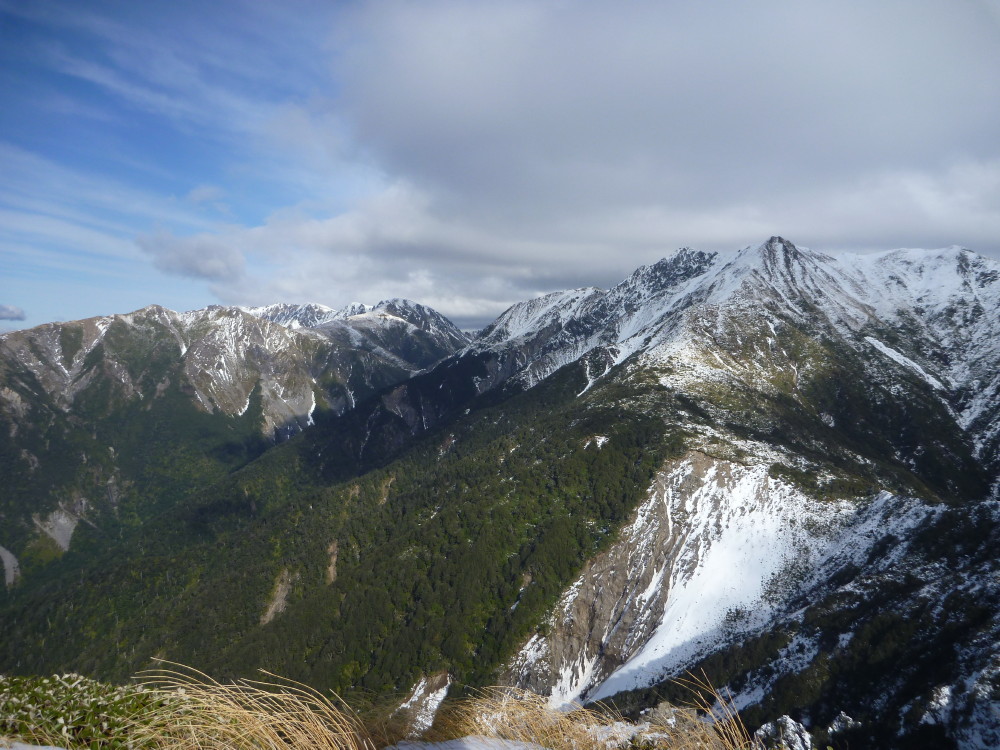 Queen’s Birthday weekend, and Les and I only wanted to do an overnight tramp. We decided that Top Maropea would be a good short trip to a lovely hut.

We expected snow, as the tops were well covered during May’s cold spell, and encountered it near Sunrise Hut, where we stopped for a snack. The water tank had frozen and the sink was full of water that had become an ice block. 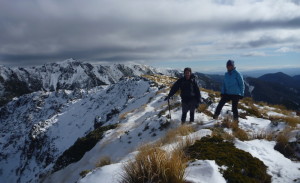 Les and Julia near the Top Maropea junction

The wind had picked up, but did not deter us. The sky was blue and we continued on up to the Top Maropea Junction. Deeper snow, but beautiful views.

When we arrived at Top Maropea Hut, we found the door open. The hut was a mess. Possums had been in and rubbish was strewn on the floor. Empty beer cans and gas bottles were everywhere. We tried not to get too angry and cleaned the place up, putting the rubbish into the spare plastic bags we always carry.

After a hot cuppa in the sunshine enjoying the views from the helipad, we felt much better. A group of Lindisfarne boys arrived to check out the hut. They were staying in Sunrise Hut, but had come to see us. They kindly offered to carry out the rubbish bag. Good lads.

Later in the afternoon, we were joined by a solo tramper who got to work with the saw and built up the firewood stack. 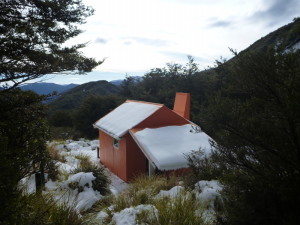 That evening after we had had our dinners, we lit the fire. The warmth was welcome, as the chimney does not have a cap and the insulation on the roof is dropping away; in some parts, roofing insulation is non-existent. The main door also needs attention at the bottom, where there is a hole big enough to let possums through. This hut needs more than a little TLC.

Sunday was another blue sky day. We made our way back to the tops and sat down to enjoy the views of Ruapehu and Ngauruhoe. How lucky we are; it only took a little effort but the rewards are great.

At Sunrise, we met the volunteer warden and gave him another bag of rubbish from Top Maropea Hut. He was saddened to hear about the mess. Just a few months ago, the hut had been in pristine condition.

Les and I walked out, meeting Simon Hill on our way down. He was walking up to Sunrise for a day trip. We stopped at Waipawa Forks Hut for lunch, and then walked out via the Waipawa River for a change of scenery. The water was not that cold, and it only takes 40 minutes to get to the disused bridge.

A great, easy overnight winter tramp, even though I had slept in two layers of clothing and my hat.