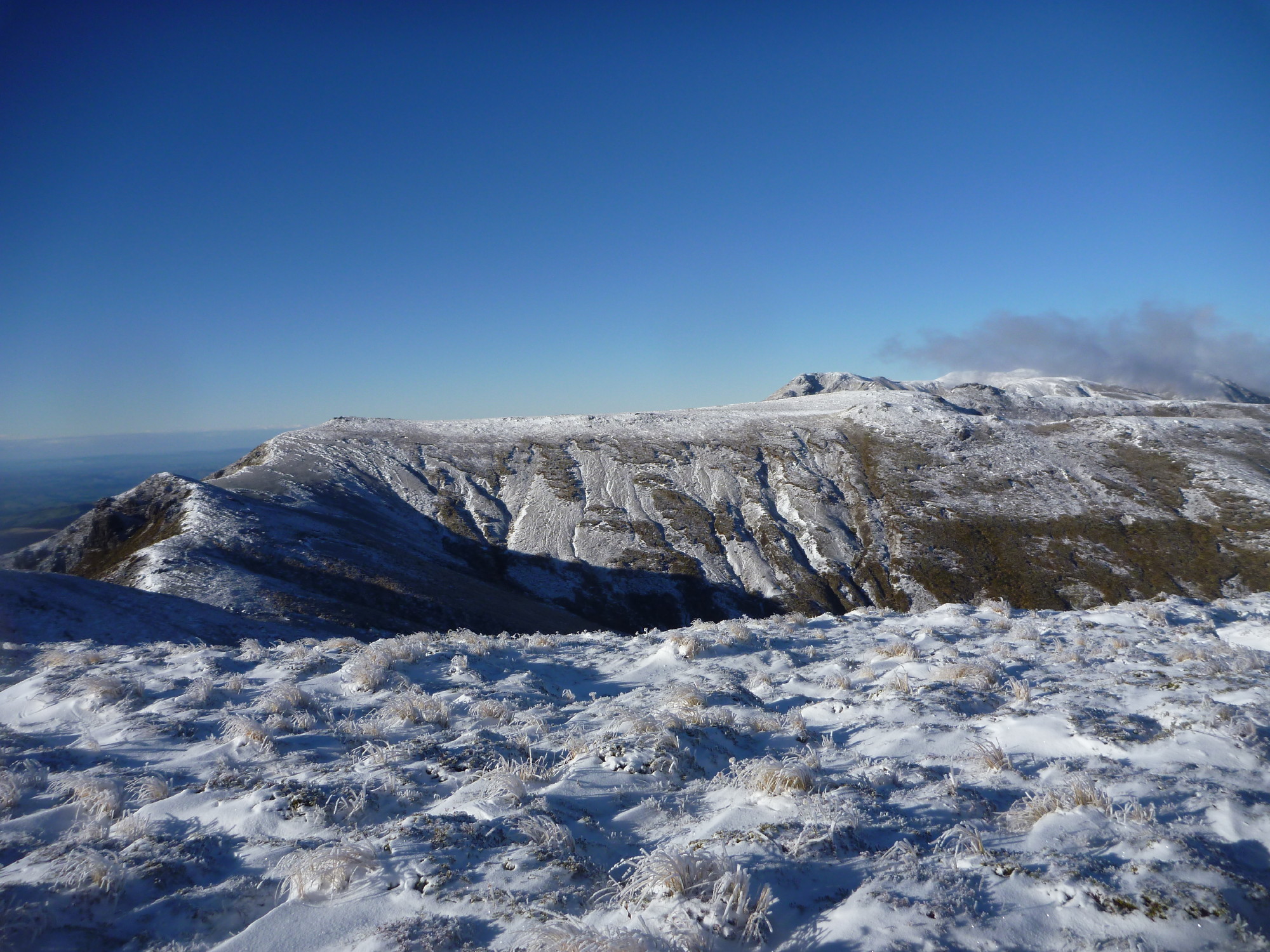 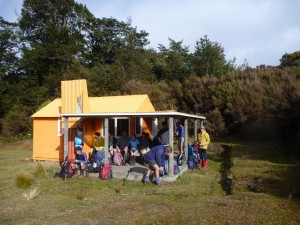 This was a Tim Tam weekend, but completely unplanned. Five hardy trampers set off with the day party from the Middle Hill car park at the end of Makahu Road.

The trip list had us going to Tira Lodge, but we thought: Let’s see what the Kaweka Ranges have in store for us, before we make any rash promises. The going was good to Middle Hill Hut, where we all congregated for a break. Two of the weekend party were behind, so a rethink was in order. The tops had a light dusting of snow on them; we wondered if the clouds would go away. It was going to be a tad cold on the tops.

We made it to the bush line, and were pleased to see that some of the day party had also made it too. They did have one big advantage… lighter packs. 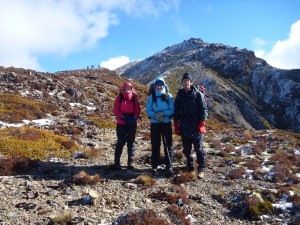 At the bush line, we donned our over-trousers, hats and gloves or mitts. The wind was reasonably strong. The three weekenders had a re-think, the first of many, and thought that Makino might be a good idea, instead of Tira. We had a quick lunch, and were soon off, to climb the last open ground until reaching the tops. The wind was strong, but we were not concerned. Once we reached the Makino turnoff, we were ten paces down the track, and looked across to the Ballard turnoff. A quick change of mind, and we retraced our steps, and forged on across the tops. The snow was not that deep, but the wind was strong, slowing and tiring us. We had a break in the lee of the wind, just before the Ballard turnoff. Munchies time, as lunch had been too quick. It was only 1.50pm, so we did not have to be concerned about time. 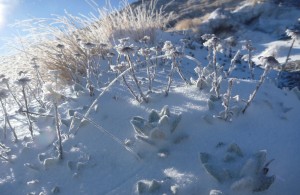 On reaching the Ballard Hut turnoff, we headed straight down the scree slopes to the hut. It sits in a small saddle, in bush, with a small high point directly behind. As we had time on our hands, we had a cuppa and we all pulled out a box of Tim Tams from our packs. Three different flavours, too. Once warmed up, we began collecting firewood for Simon to saw up for the storage box. He carried a Silky pruning saw, which made short work of some of the fallen trees around the hut. We then went and had a quick look around from the high point, before returning to start the fire. We settled down, and the wind increased, with a slight dusting of snow showers. The temperature dropped, but we were snug. Thank goodness we had changed our minds. Tira Lodge would have been an ice-box and true to its name, “Kelvinator” Lodge.

During the night, the wind continued and even increased, and we all wondered what the morning had in store. Would the weather forecasters be right this time? A beautiful Sunday had been predicted on Friday night’s TV. 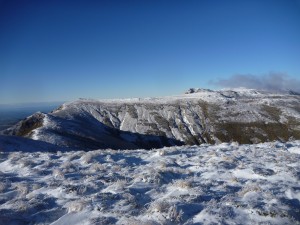 We woke as the sun was coming up. Cloud on the tops as yesterday, but we were sure this would disappear soon. Yes… they got it right. Once we were back up on the tops, the cloud progressively lifted. The views were wonderful, with fresh light snow everywhere. The plants looked fabulous in their covering.

We made our way back towards Whetu, stopping to take photos of the vistas and plants. One last look before we headed downhill to the bush line again. We took off our protective gear, and had a pleasant walk through the bush back to Middle Hill. We startled a deer near the bottom track junction to Kaweka Flats Bivvy track.

At Middle Hill Hut, we had an early snack, with a hot cuppa, and finished off the Tim Tams. Sitting in the sun, we were reluctant to get going again. The final walk back down and out was led by speedster Simon.

The two other members of our weekend party had reached the bush line on Saturday, and decided to return to Middle Hill hut. They too had a good night with two of the Bay’s finest hunters.

It proved to be a good tramp for everyone, with great views. Special thanks to Simon. Trampers: Simon Hill, Alison Greer and Julia Mackie.

Aranga Hut On Saturday 14 January the tramp was changed to a loop in the Northern Ruahine Range. … END_OF_DOCUMENT_TOKEN_TO_BE_REPLACED

Aranga Hut On Saturday 14 January the tramp was changed to a loop in the Northern Ruahine Range. … END_OF_DOCUMENT_TOKEN_TO_BE_REPLACED