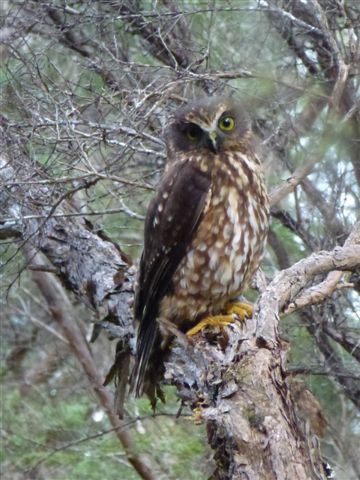 The day’s tramp was through a large block of native bush on the Te Wae Wae Station, inland from Putorino (quite a long way inland, actually), on map BH39. As on our previous visit, we were cordially greeted at the gate by our host and guide for the day, Ian. The weather had improved as we drove in, to be perfect with a clear blue sky and only a light wind. It’s a pity there were only seven of us out to enjoy the day. 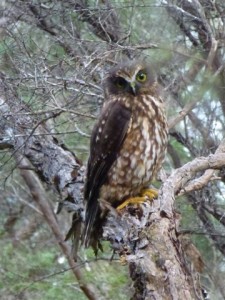 After a short ride on the back of Ian’s ute, we set out along what had been, before Cyclone Bola, the station access road but has now reverted to a broad forest track taking us into the stand of native bush which Ian and his neighbour have covenanted to preserve for future generations. Predator control is ensuring good regeneration and protection of the older trees. Young tanekaha and rewa rewa were everywhere.

Ian led us along reasonably defined tracks obviously used for predator control. He knew where to find all the interesting groves and giant trees and led us out to high lookout on a rock platform above the Te Hoe River for an early lunch. What a great place for lunch, with views up the Hautapu River and along the Te Hoe to the junction with the Mohaka with Te Kooti’s Lookout looking down on it.

After lunch, we encountered a very accommodating young morepork/ru ru. It was very happy to sit on a low branch and pose wide-eyed for our photographs. We exited the bush onto farmland for an encounter with a topdressing plane putting rock super onto Ian’s farm. Then it was along farm tracks and up via Honeymoon Cottage Hut to the ute.

After a cup of tea with our host/guide, it was back into the van for the long trip home. (We don’t often have the chance to sit in armchairs for our after-tramp cuppa.) We all agreed we had had a very good and interesting tramp with great views and were appreciative of Ian’s input to ensure we had a good day.

Aranga Hut On Saturday 14 January the tramp was changed to a loop in the Northern Ruahine Range. … END_OF_DOCUMENT_TOKEN_TO_BE_REPLACED

Aranga Hut On Saturday 14 January the tramp was changed to a loop in the Northern Ruahine Range. … END_OF_DOCUMENT_TOKEN_TO_BE_REPLACED