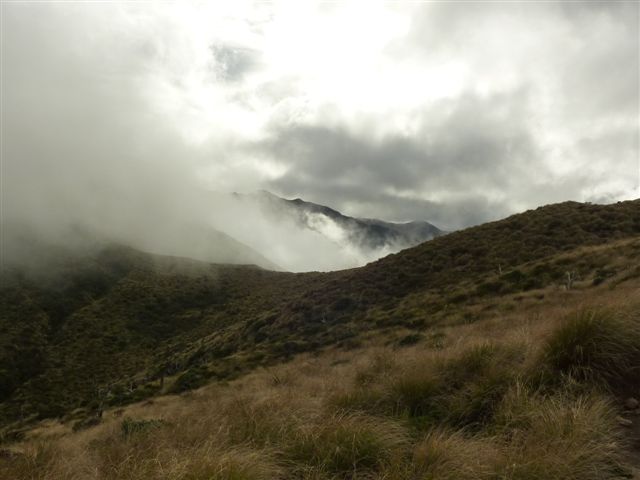 Napier was shrouded in fog, and the strange sound of what seemed to be a ship’s fog horn woke many in the early hours. The further south along Highway 50 we drove, the better the day became and by the time Kelvin had us safely at Moorcock Saddle car park, it was calm and fine.

The main group of six quickly ascended the ridge to Longview, stopping for morning tea above the large slip. Instead of going to Longview Hut, we turned north taking the tussock-covered ridge that leads to Daphne Hut. Low cloud started drifting over the ridge but visibility was still pretty good. Although unmarked, the ridge is reasonably easy to follow, a few well-placed cairns reassuring you that you are on track. 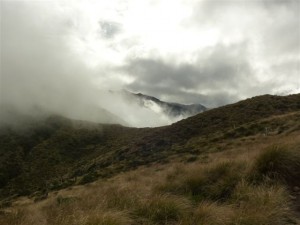 With the help of GPS and the cloud lifting at just the right moment, we found our way down and across the small saddle and onto the Daphne track.

Lunch was had at the signpost and after a discussion about the lowering clouds, it was decided to descend to the car park instead of carrying on along the tops to the farm track. We were back at the van by 2.30pm, waited a little while for the rest of the party to arrive from Longview Hut and then headed back to Napier.