A lovely morning after a cool night, and with the prospect of a good day ahead, three vehicles met at the Taupo turn-off en route to the Whirinaki Forest.

There must have been too much chatter going on in Ray’s vehicle because he overshot Pohokura Rd, the turn-off from the main Taupo highway. The forest road was pretty good considering the recent rain; we came across two gangs logging beside the road, making it a little muddy, but we all got through and arrived at Plateau car park around nine.

Only four of the weekend party were doing the longer trip, while the rest took the vehicles round to the Pukahunui car park. The day group and the weekend party headed off in high spirits, making their way up and down the ridge leading to the Upper Whirinaki Hut. The track could do with a bit of attention – it’s getting quite overgrown in places. 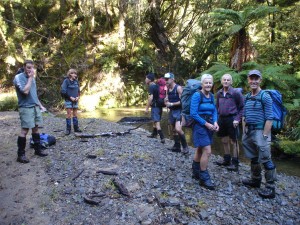 On reaching the Whirinaki River, we crossed over and turned upstream, picking up the track on the true right. After the snowstorms of recent years, we were concerned about the state of the river track but were relieved to find it recently cut and in very good order. The river was beautiful to walk beside, crystal clear, lovely ferns and bush overhanging the water, plus the call of the elusive blue duck. With only six or seven river crossings, you hardly even got your feet wet!

Lunch was had in a sunny spot just above the river. As the river narrows to its headwaters, becoming a small stream, you look down on slopes of punga fern, beautiful with the filtered light shining through the bigger trees.

As we climbed up the side of the ridge, the day party went ahead and reached the junction to Upper Te Hoe. They turned right and followed the track out to Pukahunui where their transport awaited, while the weekend party turned left and continued on to Upper Te Hoe Hut to join the rest of the group for the night. We arrived around 3.45pm, pleased to see the fire going and the billy on. Everyone busied themselves with getting tidied up, beds out, and then we settled down for the evening, with a cup of Ray’s mulled wine. Two slept on the porch, one in a tent with the rest inside, an uneventful night apart from the coming and going to the loo!! 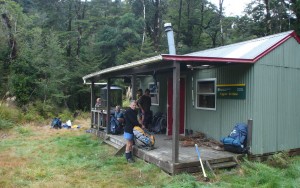 Next morning, the mist was down, so it was a bit cool. We cleaned up, packed up, and wandered off to tackle the climb back up the hill. Back up amongst the trees, the mist and fog crowding around makes Whirinaki such a special place. We reached the signpost and found Simon’s hat, which he had left from the day before, had a bite to eat, then continued on. This section of the track could also do with some maintenance – there were several trees lying across the track, some of them very large and making it a bit challenging for those with short legs! 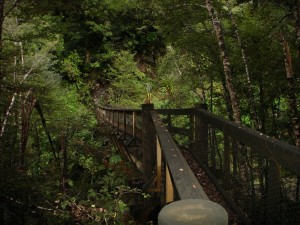 As usual, it was cold at the car park so we boiled the billy for a cuppa as we waited for the slower members of the party to arrive. We drove out just as it was starting to rain, and arrived in Napier around three after a great weekend.