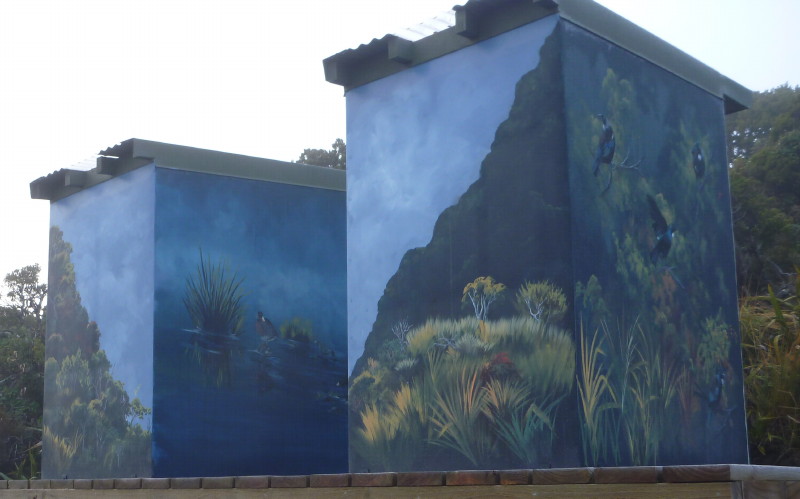 This year we revisited a hut which has had some alterations, albeit to the loos, and the heat source. Rangiwahia Hut loos have had a makeover, (see pictures). The gas heating has been taken out and a wood burning stove installed. Three cheers for these changes.

It is a long drive over from Napier, but we arrived about three hours after setting out. The weather was forecast to clear, but it did not look promising, so we changed our plan to walk in via the Deadman’s track today, and go direct to the hut. We zig-zagged up the newly cut track which took out the scramble up past the slip. I used to love that scramble, but then you can’t please everyone. We enjoyed the sculpture of the bridge, and the bush. We had no views at all from the vantage points where seating has been installed (one point still in progress at this time).

The waterfall bridge also an “improvement”? We loved the green dinosaur sitting near the top of the waterfall. All too soon, we arrived at the hut and met a group of four from Lower Hutt Valley Tramping Club, and a hunter. 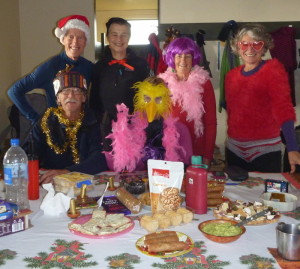 Getting into the festivities

We soon got to work on preparing for our solstice festivities. Streamers, balloons and decorations went up. The Hutt tramping party decided to decamp. We offered them full participation, but they were not up for it. 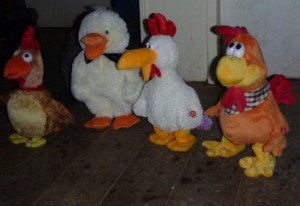 Funky chickens, getting into the groove

The fire was already going, so we enjoyed the warmth of the hut. It continued to rain and the cloud remained low. Some went for an afternoon walk, and came back wet. We all got into our fancy dress which was themed ‘Funky chickens and roosters’. This was carte blanche for anything goes. The chickens, which Sue had carried up, came out and danced for us. They are now a fixture on our solstice tramps. 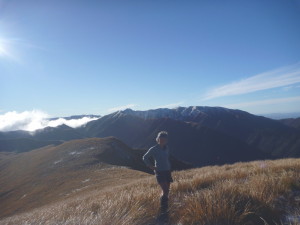 The view across to Sawtooth

As the afternoon wore on, we had our shared nibbles and chat. Santa visited in the evening, and his ho ho ho created a storm of amusement. We all got to sit on his knee, and photos soon winged their way to Australia and Napier (thanks to cellphone reception from the hut).

Two hunters arrived at 6.30pm and could not believe their eyes. Photos were taken to prove their tales. 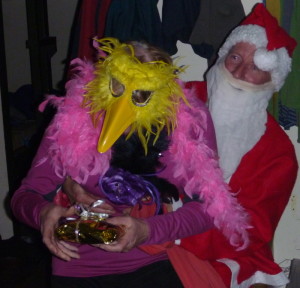 Santa and one funcky chick

After a cold night, we awoke to a slight dusting of snow and Mt Ruapehu and Ngauruhoe clearly visible against a blue sky. Yeah… right decision to walk out via Mangahuia Trig today. We cleared up, and restored the hut to its natural decor.

The walk via the Deadman’s track is an easy one, and we were rewarded with views of the Sawtooth Ridges and further south the ridges up to Tunupo and Otumore on the main Ruahine Range.

We all loved the walk along the Whanauia Range, even though at times we disappeared into holes in the tussock track which were very muddy. It was also icy and slippery. But although the wind was chilly on the tops, we enjoyed the scenery. Some debate took place as to which ridge we had walked up to reach Mangahuia. It is seen from the track as you are heading down to Renfrew car park.

The mountain cedar looked spectacular. The steepish descent to the car park went quickly, and we were soon on our way to lunch in the cafe in Kimbolton. A great weekend with good fun and company.

Sparrowhawk bivvy, Ruahine Forest Park, Saturday 6 August 2022 Banner Photo: The view east, towards the Wakararas and beyond On a beautiful … END_OF_DOCUMENT_TOKEN_TO_BE_REPLACED

Prologue: The author was on the Whirinaki tramp, reported on this website under the headline 'We observe a mock turtle and the rodent of Upper Te … END_OF_DOCUMENT_TOKEN_TO_BE_REPLACED

Ruahine User Group A meeting was held on Monday 25 July, in the NZDA rooms in Dannevirke.  Julia … END_OF_DOCUMENT_TOKEN_TO_BE_REPLACED

Ruahine User Group A meeting was held on Monday 25 July, in the NZDA rooms in Dannevirke.  Julia … END_OF_DOCUMENT_TOKEN_TO_BE_REPLACED

Ruahine User Group A meeting was held on Monday 25 July, in the NZDA rooms in Dannevirke.  Julia … END_OF_DOCUMENT_TOKEN_TO_BE_REPLACED

Ruahine User Group A meeting was held on Monday 25 July, in the NZDA rooms in Dannevirke.  Julia … END_OF_DOCUMENT_TOKEN_TO_BE_REPLACED