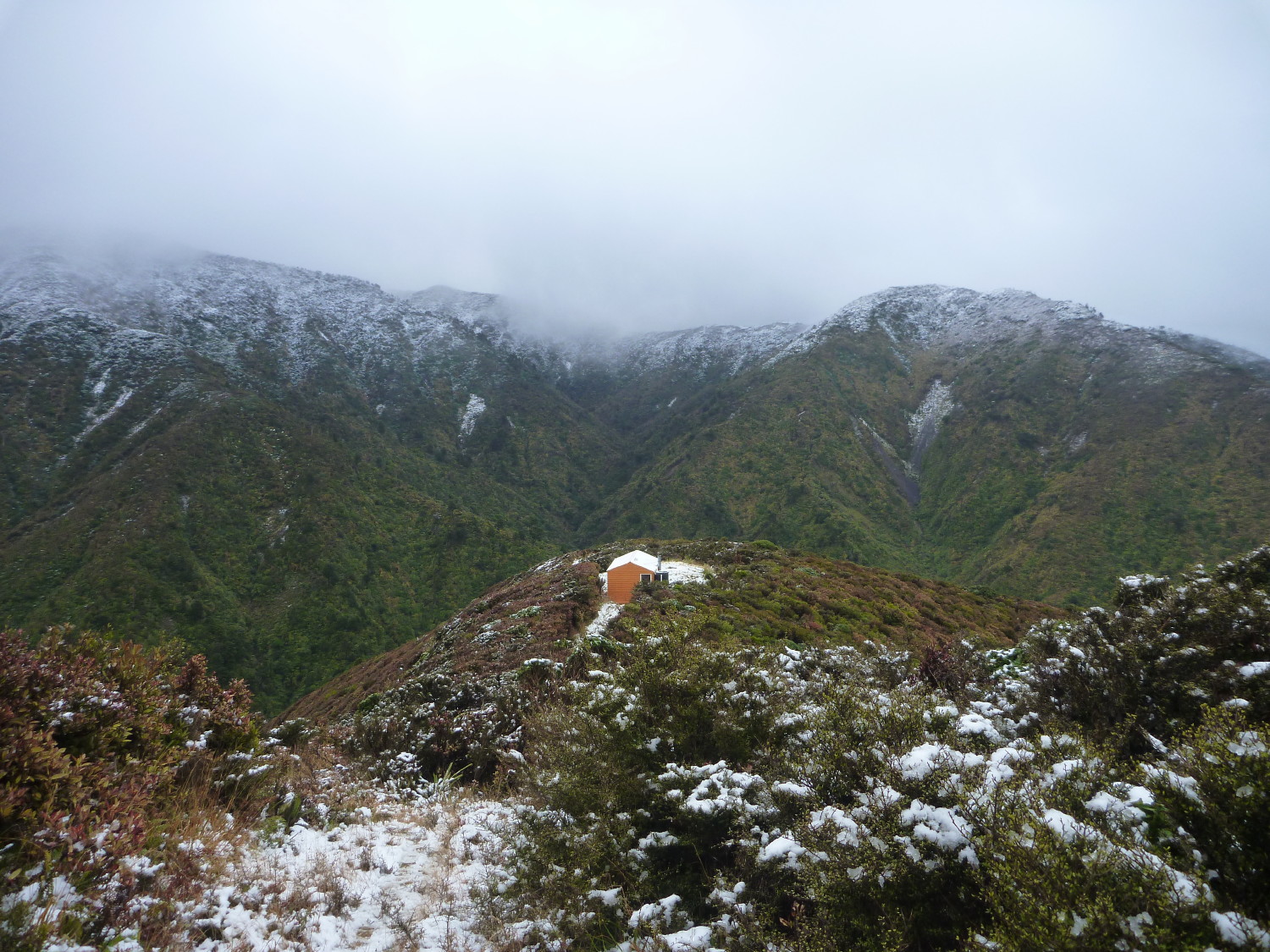 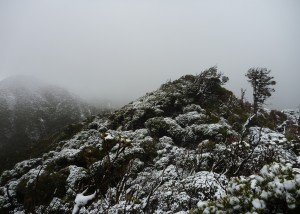 On a very cold day, the car temperature gauge showing 3C outside, fifteen trampers set off from the cowshed on private farmland. We were heading for the ridge and track that we had been told about by the local farmer. The track was developed by the Manawatu Tramping and Ski Club of Palmerston North, and none of us had walked it before. 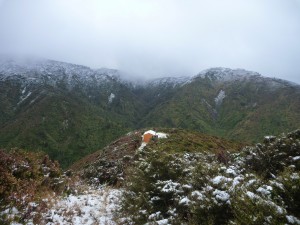 On reaching the bushline on the ridge, a garment tied to a bush indicated the entrance to the bush track. Wow, we were pleasantly surpised on how well it had been cut and, it was really quite clear.

The main range had snow and we soon were on a ridge where we could see the hut on an opposite ridge. The Ruahine tops were in cloud, which looked very snowy.

As we made our way around the last sidle onto the main track, it began to snow. Some of our party decided that it was time to turn back, but the rest of us realised that the hut was not that far away and offered shelter for lunch.

We all ate as quickly as we could, and then posed for the group photo. Taking it was a mission for Julia, which is why it looks wonky.

We all then made our way back up the main track to the junction, and at times the cloud lifted so we could see the main range. For a few minutes, there was a blue sky – before it began to snow again. 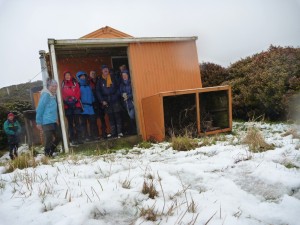 On reaching the farmland, we quickly made our way back to the van and car. We were told about the additional passenger who had decided to check out the van, when the parties who returned early had left the van back and side doors open. We thought it was a tall goat story, until we saw the pictures.

We all enjoyed the new track, and thought that in summer a loop trip would be a good idea; in via the farmland and out down the Oruakeretaki Stream. I am looking forward to it.

And from Marc Marchal.

Whenever I go through Dannevirke, it always amazes me how cold the place is. This time it wasn’t going to be any different.

After a bit of sight-seeing, we found the farm that was the start of our tramp. A cold wind greeted us and we all layered up to stay warm. Twenty minutes over farm land, and we reached bush. The path follows a ridge and was muddy and slippery. After an hour or so, we made a short stop – for a drink, I thought; for morning tea, others decided.

Another hour and we reached the tops, from where we could see the hut another hour or so away. Quite a nice view really, with snow covering the bush. We turned left and started to make our way towards the hut. By now I realised I had missed morning tea and was starting to run low on fuel. Not a good idea in the hills, so next time we stopped for a drink, I got my chocolate bar out. Snow started to set in and chocolate bar in hand, I moved on.

Some decided it was not worth going any further and returned to the cars. I, on the other hand, was looking forward to dry clothes and a roof over my head for lunch. By 13.00, we arrived at the hut, where dry clothes warmed me back up instantly. No more cold going down, I decided, and put on my rain pants, base layer, fleece and rain jacket.

It was all good going down, but way too warm on the first little ascent; what was I thinking? The rain jacket came off as soon as the snow stopped falling. I took it a little slower on the way back to avoid more falls (think I counted four on the way up) and arrived back at the cars at around 15.30. We all dashed into an old shed, out of the wind, to change into fresh clothes.

A cold tramp, but what would you expect mid-winter in Dannevirke? Those nice views on the top made it a worthwhile trip, though.

Sparrowhawk bivvy, Ruahine Forest Park, Saturday 6 August 2022 Banner Photo: The view east, towards the Wakararas and beyond On a beautiful … END_OF_DOCUMENT_TOKEN_TO_BE_REPLACED

Prologue: The author was on the Whirinaki tramp, reported on this website under the headline 'We observe a mock turtle and the rodent of Upper Te … END_OF_DOCUMENT_TOKEN_TO_BE_REPLACED

Ruahine User Group A meeting was held on Monday 25 July, in the NZDA rooms in Dannevirke.  Julia … END_OF_DOCUMENT_TOKEN_TO_BE_REPLACED

Ruahine User Group A meeting was held on Monday 25 July, in the NZDA rooms in Dannevirke.  Julia … END_OF_DOCUMENT_TOKEN_TO_BE_REPLACED

Ruahine User Group A meeting was held on Monday 25 July, in the NZDA rooms in Dannevirke.  Julia … END_OF_DOCUMENT_TOKEN_TO_BE_REPLACED

Ruahine User Group A meeting was held on Monday 25 July, in the NZDA rooms in Dannevirke.  Julia … END_OF_DOCUMENT_TOKEN_TO_BE_REPLACED